The VW Jetta Smyth Ute Gets a $30 Lift Kit

A pair of springs for a VR6 Jetta leveled out the Ute quite nicely. 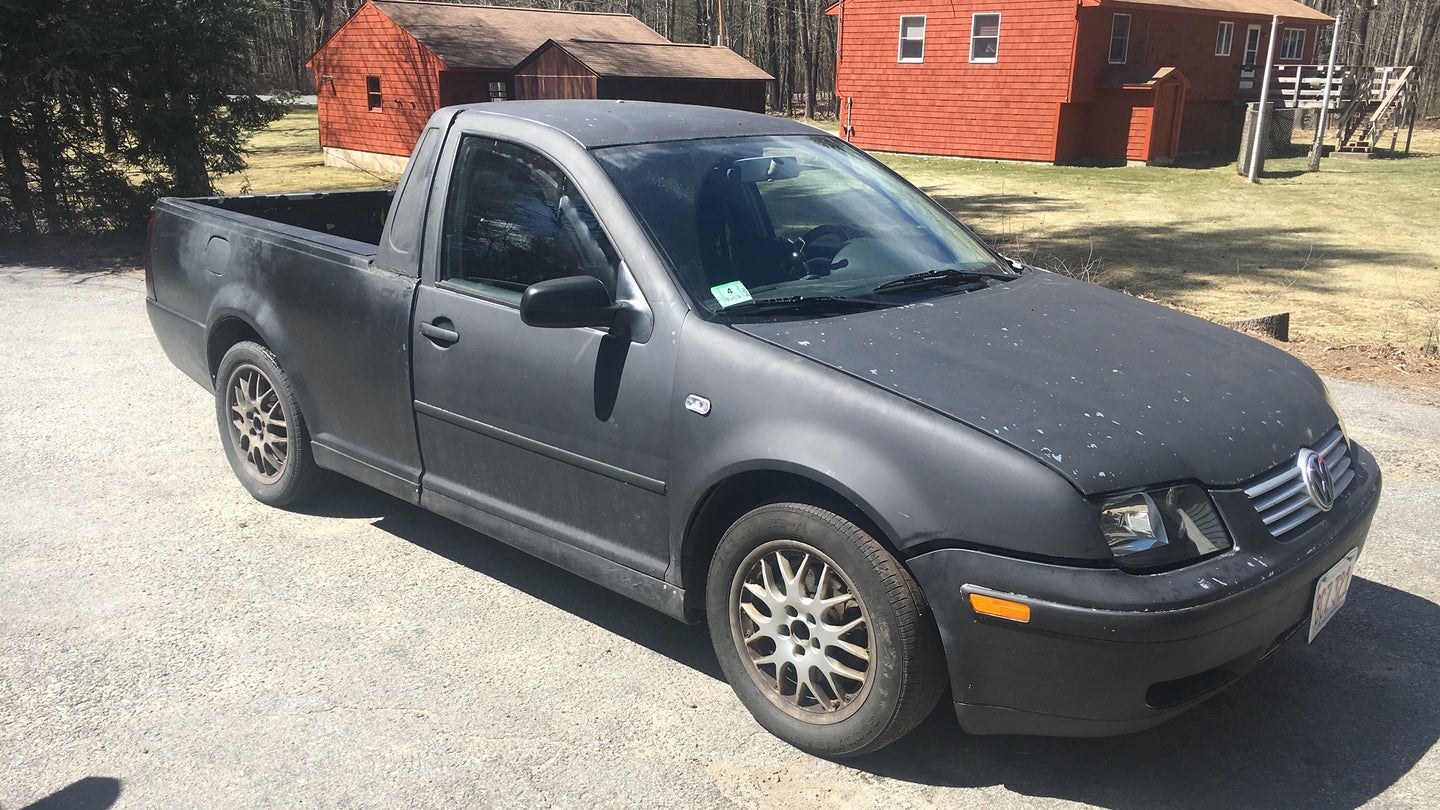 Having evicted a furry hitchhiker and replaced the cracked windshield, it was time to address one of the last known issues the Jetta Ute would need fixed to pass Massachusetts state inspection: new tires. Since the Jetta is now a truck, I decided it needed a set of truck tires, so I ordered a set of Yokohama Geolandar A/T G015 tires in size 205/70R15 to go on my spare set of 15-inch wheels. These are a bit larger in diameter than the stock tires, so I needed to give the Jetta a little bit of a lift to accommodate them. I found a $30 kit that did the trick.

Fortunately, one end of the car was already finished. The Smyth Performance ute kit replaced the original steel rear end with an aluminum and fiberglass bed, removing 200 pounds from the back of the car. As a result, the back sits higher than it used to, providing the amount of lift I want with no modifications to the suspension. What an easy job—I'm already halfway done.

The front, however, still sat as low as before, giving the Ute a dragster-style forward rake. I researched many options for raising the front. I could get custom springs for a few hundred bucks. Metalnerd and KermaTDI offer spacers, but at well over $100 they're not cheap. A thread on the TDIClub forum describes a $40 lift kit using nothing but off-the-shelf parts from the hardware store, but a lack of updates on the longevity of this setup made me question its long-term viability.

In the end, I chose the cheapest, simplest solution I could find. My Jetta is a Wolfsburg Edition with the 1.8-liter turbo four-cylinder engine. The top-of-the-line GLI model was available with VW's 2.8-liter VR6 six-cylinder engine. This engine weighs significantly more than the turbo four. Cars equipped with the VR6 use stiffer springs to handle the extra weight. So for $32.79 on RockAuto, I bought a pair of front springs for a 2003 VW Jetta with the VR6 engine.

These were easy enough to replace with a set of strut compressors. My biggest problem was not the stiffer springs, but years of corrosion from New England's salty roads holding suspension components together even after I had removed all the bolts. Liberal amounts of lubricant and percussive maintenance (in other words, whacking it with a hammer) convinced the parts to separate eventually. The VR6 springs are significantly taller than the ones I took off the car. The problem was compounded by the fact that the bottom coils of each original spring had actually broken off at some point. No wonder the front sat so low.

Installation was the opposite of removal, and the Ute sat on its own four wheels again. It was as if the stock VR6 springs had been designed by Volkswagen to level out a 1.8T car with a Ute conversion. The Jetta now sits perfectly level and a slightly higher than stock ride height that should be enough to fit the larger tires when they arrive.

Michael Gallant of Smyth Performance also runs VR6 springs on his Jetta Ute and has complained to me that when combined with Bilstein HD struts the ride is too harsh for his liking. My car has basic struts, not Bilsteins. I didn't replace them because they still work fine and I'm cheap. While I do notice the VR6 springs are stiffer than the broken original springs, the car still has the excellent ride quality it had before, which is what I was worried about losing. If anything, it soaks up the bumps even better now that its springs are all there, despite them being a bit taller and stiffer than before.

Sometimes the easiest cheapest solutions are the best ones.