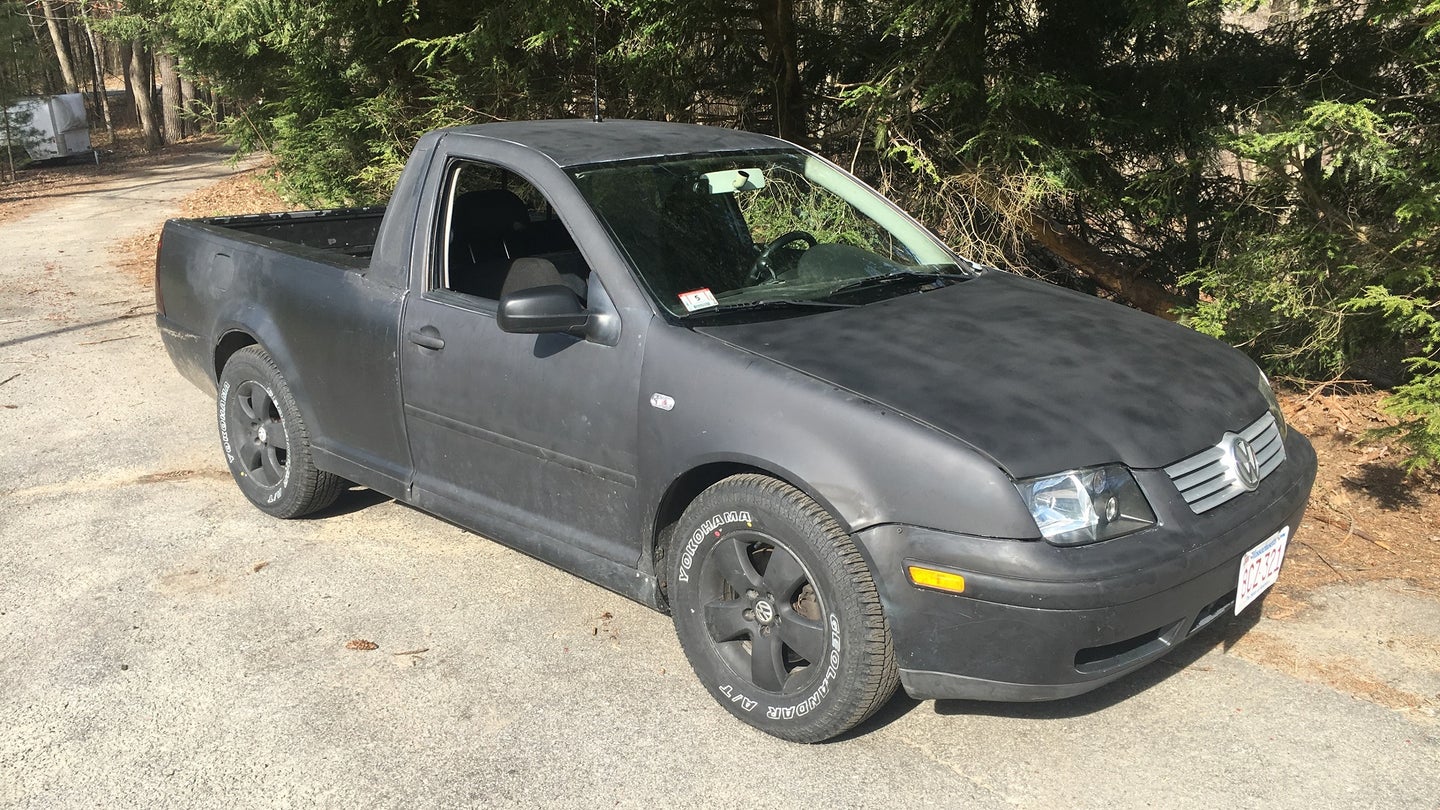 Ever since the beginning of the Smyth Ute project, there's been a very specific fear in the back of my head: that the strict Massachusetts car inspection system would deem my creation unworthy of its stamp of approval, banishing it from the Commonwealth's roadways for good (or until someone registered it in another state that thinks the Ute is okay).

The last time it was inspected was April 2017, while it was still an ordinary sedan. I had to jump through a number of hoops to make it pass the emissions test. Although it has since transformed from a sedan into a mini-truck, it did have one more factor in its favor this year. Massachusetts has a 15-year rolling exemption for emissions testing, which meant that this 2003 model is now exempt. This is great since the "check engine" light has been on for a P2400 evaporative emission system failure that I haven't been able to clear.

But the big roadblock, of course, was that one-quarter of the car's original structure is now gone, replaced with an aluminum and fiberglass bed. Would the inspector take one look at my contraption and just say no? Would I have to go through some highly bureaucratic procedure to get it registered as a kit car, despite the fact that the original Jetta drivetrain and floor pan are untouched? With the end of April approaching, it was time to find out.

The major change, and one of the biggest expenses of this project besides the Smyth Performance kit itself, is a new set of wheels and tires. When I first got the car I visited my friend Jonah's shop for a set of "inspection tires," basically the cheapest set of tires he could find that would pass inspection. I've been driving on those for a year now, and two of them are too worn to pass. I was given a set of 15-inch alloys from a lower model Jetta free of charge. They are smaller than the 16-inch wheels that came with the car, and that's according to plan.

To go on them, I splurged for a set of new Yokohama Geolandar A/T G015 tires in size 215/70R15, a bit larger than stock. These would certainly have enough tread, but also give the Ute a tougher, more truck-like look, especially with the white lettering on the sidewalls. Fitting these tires is why I replaced the stock front springs with springs intended for a heavier VR6 model, raising the car just enough to clear.

Beyond that, I made many small cosmetic tweaks. I'd bought new turn signal housings for the front fenders. One blew off the car at one point, so I had to wait to take it in for inspection until a replacement arrived. I attached the front bumper a bit more securely, both to reduce the panel gap and to reduce rubbing from the new tires. They do fit but rub a tiny bit at full lock, and I didn't want to risk tearing my own bumper off.

I added a rivet here and a rivet there to make the fiberglass body panels fit a little bit better. I re-sprayed the front of the car with black primer where it had come off during the winter. I tightened the parking brake so that it would hold the car in place if I attempted to drive off with the brake on. I made sure all the lights worked because I didn't want to fail for a stupid reason. Finally, after starting the car to drive to the inspection station, I used the OBD2 scanner by Uten that I'm evaluating (full review to follow) to clear the engine codes and turn off the "check engine" light. It didn't have to be tested for emissions, but I didn't want to give the inspector any excuse to fail it.

Waiting for the final replacement turn signal lens delayed the inspection past the end of April until May 2. I left the Jetta home until my drive to the inspection station. The inspector's looks weren't too funny. Of course, he asked some questions about the kit. Everyone does. He correctly pointed out that my registration still lists the body style as "sedan" when it's a truck, but it's not like Volkswagen built the Jetta in a truck version for me to change it to. The test was fair and square. He checked everything he was supposed to. Because I knew what he was going to check, I'd made sure all of these items were in order. There was no emissions test. In the end, despite the extensive body modifications, the computer printed out a shiny new inspection sticker with the number 5, not the dreaded red "R" of failure.

This further proves that although the Massachusetts car inspection system tough, it's honest, and apparently fair to Smyth Ute builders like me. Time will tell if the photo of the back of the car that does not look like an ordinary Jetta will come back to haunt me, but unless that happens, the Ute is officially roadworthy for one more year. Now that the worry of inspection is over, I can switch my attention to the work I actually want to be doing on it.