The Volkswagen Arteon Will Have An 'R-Line' Appearance Package 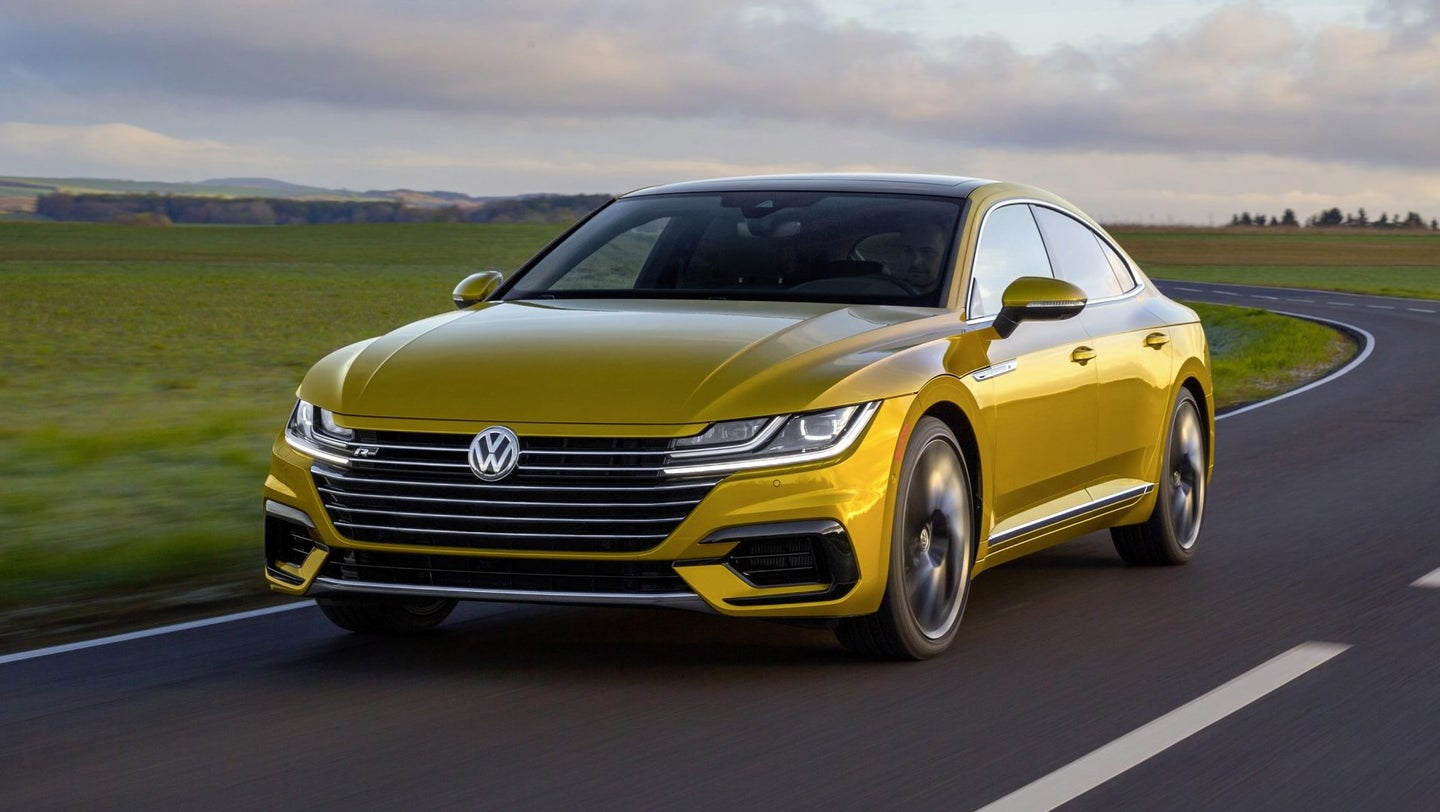 Volkswagen's upcoming Arteon four-door coupe will make a stand for the body style's right to exist in this Jurassic market, which favors bulky crossovers and sedan sale-slaughtering SUVs. The company hopes that the Arteon will prove successful in the market due to a "go-kart feeling to it and great driving dynamics," and VW evidently wants to get that point across from first glance, as it announced Tuesday that the car would receive an "R-Line" appearance package, to make apparent the car's professed sportiness.

Due for introduction at this year's New York International Auto Show, the Arteon's R-Line package encompasses a set of external and interior cosmetic changes. Buyers have a choice between 19-inch and 20-inch aluminum alloy wheels, while the R-Line badge comes standard. The front bumper adds intakes and everyone's favorite lack of color, black, which reappears on the car's trunk spoiler.

Cabin-wise, alterations are focused on driver-operated surfaces. The wheel will be backed by paddle shifters and sewn together with bright stitching, whose threads can be followed into the shift knob. Pedals and door sills are stainless steel, with the latter featuring more R-Line motifs. Metallic accents can be found throughout the interior, but not on the (surprise) black headliner.

The R-Line package, save for the hypothetical gains made with smaller sidewalls and a spoiler, adds no performance improvements of which to speak. The base Arteon will need respectable performance in order for the R-Line not to be snickered at by its competition, but Volkswagen may have that covered.

The car will use the company's 2.0-liter TSI inline four, a variant which powers the current Golf R, where it makes 276 horsepower and 280 pound-feet of torque. Power figures have not been announced for the Arteon, but regardless of power output, its 8-speed automatic transmission and optional 4Motion all-wheel-drive will keep power reigned. Some reports link a 400 horsepower, 3.0-liter turbo VR-6 engine to the Arteon with a possible shooting-brake body style, but whether these reported developments will make production is unknown.

The Drive reached out to Volkswagen to ask if variants sportier than the cosmetic R-Line were due down the road, such as a GTi model, or even a full-fat R.

"There are no plans to introduce a more sporty model than the R-Line," tells Pietro Zollino, VW North America's Executive Vice President of Communications. "Even I agree that it would be a good fit for this great car."

The Volkswagen Arteon and its R-Line package are anticipated to arrive on the market this fall.