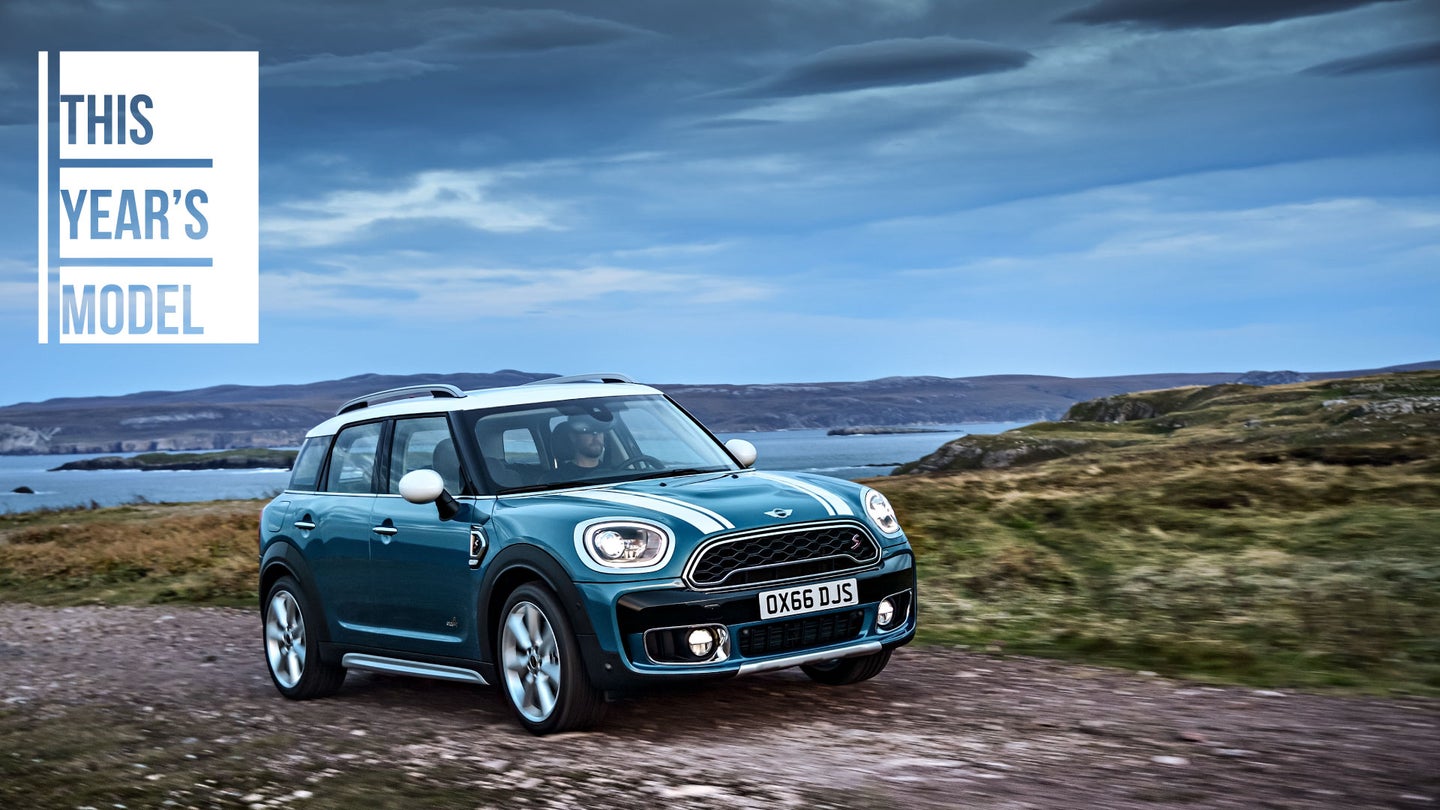 Bigger-is-better has rarely been a winning formula for Mini, whose entire ethos springs from molecular smallness. Even BMW's reborn Mini Cooper of 2002, though it dwarfed the seminal 1959 Mini designed by Alec Issigonis, was a renegade Ant-Man compared with the gigantic SUVs that were lording over America.

The further-enlarged Mini Countryman of 2010 illustrated this brand's first struggle with middle-age spread. There was a sense that Mini’s designers and product planners had battled over what the thing was supposed to be, and nobody won. Instead of a decisively roomier alternative to the standard Mini, the Countryman ended up the Pillsbury Doughboy of the lineup: Whimsical, lard-assed, and of dubious nutritional value for growing families.

This time, Mini isn’t settling for literal half measures. The resulting Countryman is a counter-intuitive winner, upsized to match other subcompact crossovers, but without losing the direct steering and sprightly performance that fans expect. What the BMW-owned brand proudly proclaims “The Biggest Mini Yet” shares its underpinnings with the BMW X1, the sharpest handler among the subcompact sport-ute set.

The 2017 Countryman grows one inch wider and 7.8 inches longer, and rides a 2.9-inch longer wheelbase. It’s only an inch longer than the stretched Mini Clubman model, but the Countryman’s roof stands much higher, while the seating position rises to supply the tall-crossover vistas many Americans favor. It all translates to genuine four-passenger comfort and small-family cargo space, clearly and finally differentiating the Countryman from a standard Mini Cooper.

One unexpected upside is that, by filling out its britches, this Countryman looks better and more proportional than before. At first glance, you’re barely aware that the Mini has grown larger, let alone by nearly eight inches. Instead of appearing like a tiny car with a case of the mumps, this Countryman looks more like a scaled-down crossover, packing 6.5 inches of ground clearance and optional all-wheel-drive. Yet the Mini’s familiar styling signatures are all there, from the bulldog stance and emoji-like frowning grille to optional racing stripes; contrasting roofs and side mirrors; and a huge range of flattering paint colors (including new Island Blue and Chestnut), and optional wheels like the handsome black alloys on my test model.

The premium cabin suggests what might happen if Hugo Boss had a cheekier cousin: It’s black Germanic soberness stirred with a spoonful of Mini sugar, from familiar center toggle switches to half-moon-shaped door handles. Gray-flannel journalists invariably grouse about the ring around the central display that lights up with various colors depending on functions—red and blue for climate adjustments, etc.—but Mini mavens tend to like the playful features.

Upgrades include a version of BMW’s solid iDrive infotainment system with an 8.8-inch center touchscreen that also adjusts via a generous rotary console knob. My tester’s leather-wrapped John Cooper Works steering wheel (a $400 option) boosted visual and tactile impressions. A head-up display, part of a $2,250 technology package, reflects its windshield image via a tiny clear plastic screen that motors up from the top of the dash. It recalls a miniature taxi divider, and this driver feels it intrudes upon, rather than enhances, the outward view.

My Mini did without a clever optional cushion that flips out over the rear bumper to create a comfy perch, but tailgaters will find it a must-have. (A powered liftgate is another new option). Manually-adjusted front seats keep Mini’s seatback recline switch, a little ring so awkwardly placed that only Gollum could snatch it quickly. Once properly positioned, though those seats—clad here in sturdy black fabric—are comfortably built for the long haul, including a manual thigh extender.

The Countryman’s expanded real estate is instantly noticeable in back. Reclining rear seats feature a versatile 40/20/40 split, and they slide five inches fore-and-aft to demarcate passenger and cargo space as needed. There’s 17.6 cubic feet of storage behind those seats, about what you get in a full-size sedan. Folding rear seats opens up 47.6 cubes of storage, enough for a modest IKEA run.

Both numbers beat the scrawny holds of a Mazda CX-3, Nissan Juke or Mercedes-Benz GLA-Class, and are on par with a roomier Audi Q3 or Buick Encore. For fans of traditional hatchbacks, a good mental image is a Volkswagen GTI, which nearly matches the Mini’s seat-down luggage space, while managing about 15 percent less cargo behind back seats. BMW’s X1 does crush its Countryman with 27 cubes behind the rear seats and 58.7 overall, but the Bimmer is also 6.2 inches longer.

In an increasingly homogeneous world of automatic transmissions, my Countryman S All4 threw a snappy salute to old school: A six-speed stick, in place of the excellent eight-speed, paddle-shifted automatic that’s an option. The stick is good, not great, with its long throws and crowded gates that make it easy to grab the wrong gear. Still, tied to the S model’s silky 2.0-liter four with 189 horsepower, this manual Mini delivered a clutch performance (sorry) negotiated via aluminum-trimmed pedals, one of many features that you won’t find on budget rivals.

Mini cites a 0-60 mph squirt in seven seconds flat, which trails the Mini Cooper Clubman S by just 0.4 seconds and the four-door Mini Cooper S hardtop by 0.7 seconds. From hole shots in Manhattan traffic to backcountry jaunts, the Mini was abetted by a sturdy 207 pound-feet of torque that’s fully on tap starting at just 1,250 rpm. The Countryman S All4 taps out at a very respectable 137 mph, or 139 mph in front-drive trim. EPA city fuel economy is below the class average at 22 mpg, but reaches a respectable 32 mpg on the highway.

The previous, flinty-riding Countryman delivered punishing blows on any scarred surface, including the brick cobbles of my Brooklyn side street. Fortunately, the redesigned model supplies notably smoother ride quality, even on my tester’s 18-inch wheels. (19-inch rims are optional.) One front wheel did succumb to a vicious pothole in Manhattan, but that monster crater might have swallowed an entire car. The misadventure did raise my continued objections to run-flat tires, and the BMW brands’ obsession with this most useless, treacherous invention: Instead of a spare that I could change in 15 minutes and be on my way, the ostensible run-flat was too destroyed to work at all, and Mini of Manhattan didn’t have another 225/50/18 tire in stock. As in several similar incidents, all the “run-flat” did was to leave me flat and walking. If this is modern technology, give me a Mickey Mouse spare any day.

Until the busted tire, the Mini performed ably, more like a tall-riding hot hatch than a typical muffin-soft crossover. Climbing and then descending Route 9W north of West Point and the U.S. Military Academy—a road that local motorcyclists have dubbed the Cliffs of Insanity—the Mini zinged through vertiginous curves with minimal body roll, even without its optional dynamic dampers. The Countryman doesn’t change direction as briskly as smaller Minis, though, and its higher stance, AWD and Mini-record curb weight of 3,671 pounds eventually write a recipe for understeer near the handling limit. (Drivers in warmer climes might easily forego optional AWD in favor of a lighter, more-affordable front-drive model). Yet the robust steering is one of many clues—along with the engine and transmissions—that trace the Mini’s design and engineering to Munich, Germany, with the Countryman itself built in a new factory in the Netherlands.

In coming months, a pair of 2018 models will fill out the lineup: the 228-horsepower John Cooper Works Countryman, and the plug-in hybrid Cooper S E Countryman. That hybrid model pairs the three-cylinder engine with an electric motor and 7.6-kilowatt-hour battery to supply 221 horsepower and 284 pound-feet of torque, along with 24 miles of all-electric driving range.

Price is relative to your admiration for Mini brand

Now, $32,000 may sound like a big chunk of change for a small crossover. One mainstream competitor, the 188-horsepower Nissan Juke Nismo AWD, starts at $28,170— about $3,800 less than a base Countryman S All4. But Minis cost more than Nissans for a reason: The cars may still be associated more with Britain than Bavaria, but each generation adopts more BMW features, which now extend to the chassis, engines, transmissions and infotainment. That stuff doesn’t come cheap.

The Mini’s fairer fight is with a like-priced pair of German cocktail wieners, the Audi Q3 and Mercedes-Benz GLA250. The Countryman outperforms either, especially the lame-duck Q3—the least-defensible car in the Audi lineup—and the Mini is just as deluxe and fully featured. (Audi's downsized, upcoming Q2 looks to be worthier competition).

I suspect that many young, sleep-deprived parents will walk into a showroom to check out a Mini Cooper and walk out a Countryman owner instead, once they get a load of its superior space, practicality and available AWD. Considering our native proclivities, it may only be a matter of time before Mini rolls out the first three-row SUV in its long history. The name will be a snap: The Countryman USA.