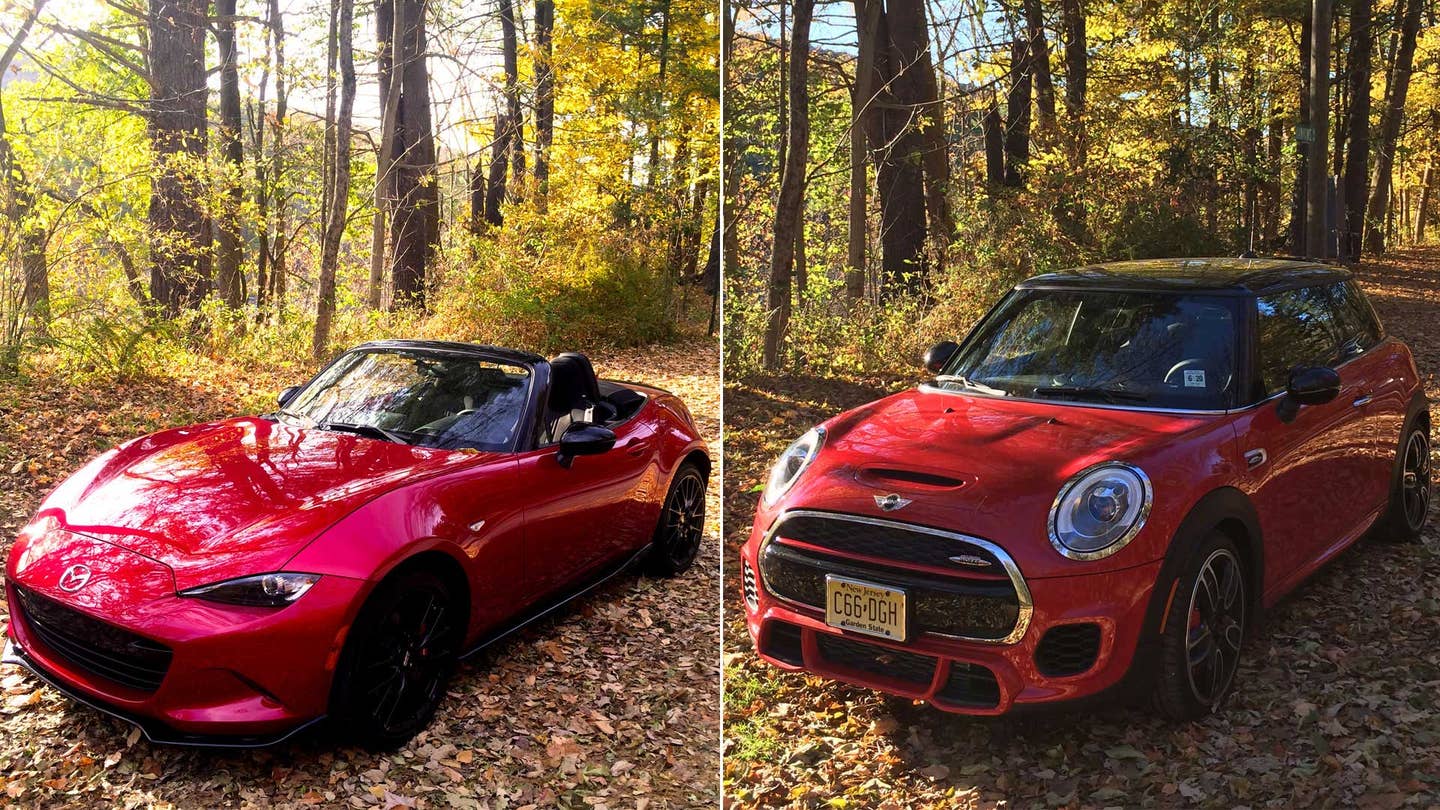 In this golden age of cars, autophiles face wonderful choices. If you’re too shy (or offspring-encumbered) for a Racing Yellow Chevrolet Corvette Stingray Convertible, there’s the quilted-leather hatchiness of a loaded Mercedes-Benz GLA 45 AMG, or the thrashy vinyl muscle of a Dodge Charger Hellcat retro-sedan—each around 60 grand, each able to launch to 60 mph in the four-second range.

But what of more modestly priced vehicular delights? It’s hard to argue with the versatility, driving enjoyment and interior fitment of a Volkswagen GTI, our go-to in such discussions. But there are other options that don’t necessarily package the stereotypes the GTI heaps on its drivers. (See: overly rational, overly brand-invested, “starter sports car,” etc.).

They package other stereotypes, yes, but still.

The two cars below are priced, as tested, within a stone’s throw of $33,560, which indicates the average transaction cost for a new car. But they represent antithetical approaches to what an impractical, red-bodied, black-topped sportster should be. Front drive vs. rear drive. Hardtop vs. roadster. Turbo vs. naturally aspirated. Four seats (well, sort of) vs. two seats. Hatch vs. trunk.

Which should you buy? We have our opinion. You’re entitled to ignore it if you’d like to be wrong.

Coopers, especially the range-topping John Cooper Works iterations, feature tight handling, buzzsaw acceleration, a raspy exhaust note and, despite their BMW Group parentage, a vestigial air of ersatz tweediness. They’re small and sporty, everything people claim to desire in a vehicle. But after spending a week in one, driving nearly 1,000 miles on an isosceles-like trajectory between New York, Washington and rural Pennsylvania, we say with confidence: This car is an asshole.

Yes, it’s fun to drive—or, at least, speed up, snick through gears and steer. Just don’t go over any bumps. And by bumps, we mean anything larger than a quark. How much do you like the current condition and placement of your spine? The JCW will have you wishing you could swap skeletons with a cartilaginous shark, even given the beast’s ill reputation and sour odor of digesting fish.

Also, has no one told Mini that interior decorating does not require tossing onto the étagère every single tchotchke you own? The inside of the car resembles a Christmas tree decorated by a horde or Ritalin-addled tweens set loose in Hobby Lobby. Every time we sat in this $37,000 toy box we wanted to punch it right in the big, round not-speedometer that dominates its center stack. Even the emotive multicolored ring that illuminates the rim of this clown nose—graphically demonstrating things like increased revs or stereo volume—couldn't delight us. And we’re usually suckers for pretty lights.

Most suspect is the exterior “styling.” Mini is so enslaved to its squared-up, bug-eyed 1959 ur-caricature, it has nowhere to go but out. The bigger these cars get—and this one isn't small, at least on the outside—the more they look like a hyper-inflated Dollar Store pool toy: Cloying, phony, smug, bulging with hot air. This car is the over-wrapped gift box in which a fart arrives. Take a big whiff.

“Why does everyone look at the Miata?” my passenger asks, as we pass a gaggle of teenage skateboarders practicing their ollies on the local UPS depot loading ramp, throwing thumbs-ups and flipping birds at us from their apexes. “Because it embodies fun, and people love fun,” I offered. “Also, jealousy and mocking.”

The Miata elicits derision, mainly from people who have never driven a Miata. The car is elemental, as close as you can get to the road without being dragged along it, or impregnated into it. But it’s never punishing. The best gloves are not always the warmest ones, but the ones that best transfer a sense of touch and range of motion. Smaller and lighter than its predecessor, yet offering more usable room inside, the Miata fits like a bespoke pair.

The previous-generation car had a vacantly grimacing visage that always reminded us of a developmentally delayed kid who’d just been caught interfering with his cousin in the basement. This new one has more of a sneer. Our face’s resting position is similar, so we imprinted immediately. Happier people, or people who think they’re happier than we know we’re not, might prefer something a bit friendlier.

The rest of the body follows this taut smirk, rising and falling—mostly falling—in unified harmony. From the front three-quarter view, it looks ever so much like a flattened frog. But we have a soft spot for the soft spots of spotted amphibians. Blame an early childhood experience with a lost Kermit puppet and a heavy sofa-bed.

The interior is flawless, save for the slightly prehensile reach required to twerk the infotainment controller. Everything is legible and where it should be and can be operated, mainly, without looking away from the road. If we want to quibble, the digital gas gauge is a bit illegible with the top down (we always had the top down), but it doesn’t really move so you don’t have to worry about it. We drove this car for 300 miles through city and country like we were herding buffalo off a distant escarpment, and when we were done, we’d achieved almost 33 mpg.

The $32,300 sticker on our kitted-out Club Sport isn’t low. But it’s less than the $37,700 on the Mini JCW. And the Miata is about as close to perfect as a contemporary car can be. How much is your happiness worth?