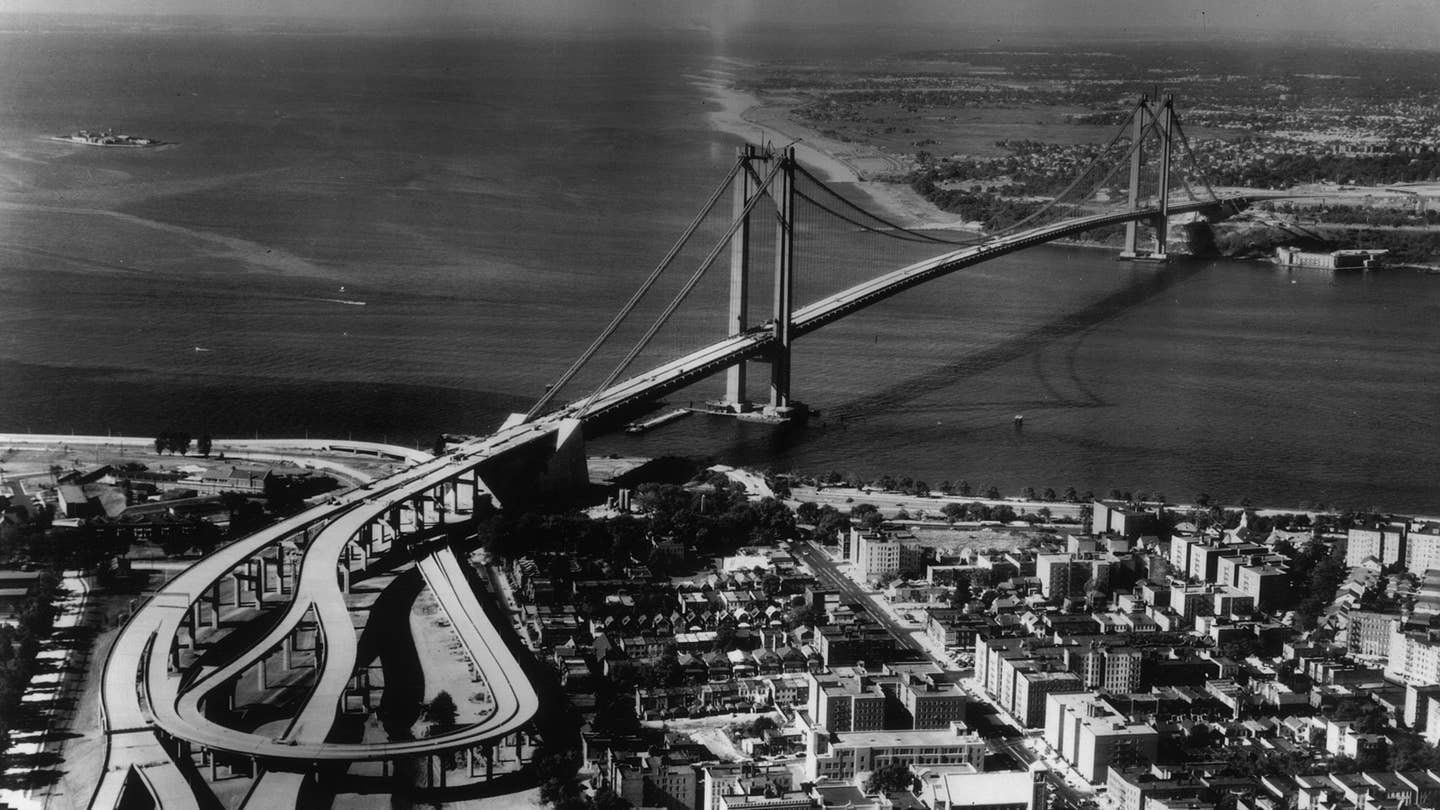 For those of you planning to hop into your cars—or Zipcars or whatever—to leave the city this weekend, here are a few things to mull over as your kidneys recoil between pothole impacts. Beneath the pockmarked surface of New York City's roads are—well, substrate and reasons for yet more potholes to be sure, but also... – stories hidden by the gray-brown urban road grit of time.

So buckle your seatbelts—lest you hit your head on the car's ceiling when it lurches over the next uneven pavement patch—and dive into a brief and portable highway history of America's busiest city.

As you drive between 23rd and 34th streets on the Franklin D. Roosevelt East River Drive, chunks of a strange and terrible epoch of world history lie beneath the highway's moonscape surface. After World War II, American Liberty ships were called into service for a second time in their brief history. Cranked out of US shipyards with alarming speed when there was a need to get troops and matériel to the European theater during the war, these slapdash workhorses came in handy again when hostilities ceased, delivering aid supplies to the war-ravaged continent.

They crossed the Atlantic fully laden with goods, but the return voyage called for some sort of ballast, to keep the mass-produced tubs from capsizing in the wind-tossed North Atlantic. It just so happened that work had already begun to clear away the rubble in Bristol, a British port city that had suffered heavy damage during the German Luftwaffe's bombing campaign. The Liberty ships took onboard bits of demolished buildings and sailed back to New York City, where road construction crews used the rubble as a base for a section of the FDR Drive.

This section of the road is called Bristol Basin, but you won't see too many signs for it. There was a plaque dedicated to the people of Bristol who forfeited their lives during the war, and another that was dedicated by Cary Grant when construction forced the relocation of the plaque in the early Seventies. Today, Bristol Basin is a historical footnote that has receded into the shadows of our collective consciousness.

Beneath this East River Drive of the City of New York lie stones, bricks and rubble from the bombed City of Bristol in England … Brought here in ballast from overseas, these fragments that once were homes shall testify while men love freedom to the resolution and fortitude of the people of Britain. They saw their homes struck down without warning. It was not their walls but their valor that kept them free… And broad-based under all is planted England’s oaken-hearted mood, as rich in fortitude as e’er went worldward from the island wall

In 2003, federal officials arrested Khalid Shaikh Mohammed, who had been determined to be one of the Al-Qaeda masterminds behind the Sept. 11th attacks. Through National Security Agency wiretaps associated with his arrest, investigators also uncovered a plot to destroy the Brooklyn Bridge.

Mohammed had enlisted the help of Iyman Faris, a 33-year-old truck driver from Columbus, Ohio. Faris, a naturalized US citizen, had traveled to Afghanistan in 2002, met with Osama bin Laden and had subsequently been tasked with scouting the Brooklyn Bridge and obtaining gas cutting torches to destroy some of the bridge's support cables. After inspecting the bridge late in 2002, Faris told his al-Qaeda bosses that the plan wouldn't work. But it was too late; the conspiracy net had been cast into the waters of evil. On May 1, 2003, Faris was convicted of conspiracy and providing material support to al-Qaeda. According to the federal bureau of prisons, his scheduled release date is Dec. 23, 2020.

Next time you're sitting in horrible traffic on the Brooklyn Bridge, think how much worse it would be if those guys you thought were construction workers were actually terrorists, sending you to your doom with a few well-aimed swipes of a blow torch.

For more than 50 years, motorists from Brooklyn, Queens and Long Island have found the Verrazano-Narrows Bridge a convenient way to escape New York City—via Staten Island—to more tranquil locations situated south and west of the metropolitan area. It's also the only way to leave Long Island without having to drive through the traffic and madness of Manhattan. But construction of the bridge, which lasted from from 1959 until the bridge's completion, in 1964, did more than just create a slick new interstate link to the mainland. It destroyed people's lives.

If you want to know nearly everything there is to know about New York City's highway infrastructure and all of the trials surrounding its creation, pick up a copy of Robert Caro's landmark book, The Power Broker. This 1,336-page tome is not for the faint of heart (it took me an entire year of subway rides to finish it), but there's a lot of interesting information in there that applies highways in general and their impact upon existing communities.

Bay Ridge, the Brooklyn neighborhood where the eastern end of the mighty Verrazano makes landfall, was ripped apart by the approaches to the bridge. In all, 800 homes were destroyed to make way for roadways leading to the bridge, displacing 7,000 people. More than 5,000 people showed up at the ribbon cutting ceremony in 1964, and today, Bay Ridge seems to have adapted to the change. But it's good to remember than a few eggs were broken to make that transportation omelette.