The Mighty $265,000 Earthcruiser Is a Prepper's Fantasy

With the Doomsday Clock ticking to midnight, this mighty 4X4 Earthcruiser makes a lot of sense. 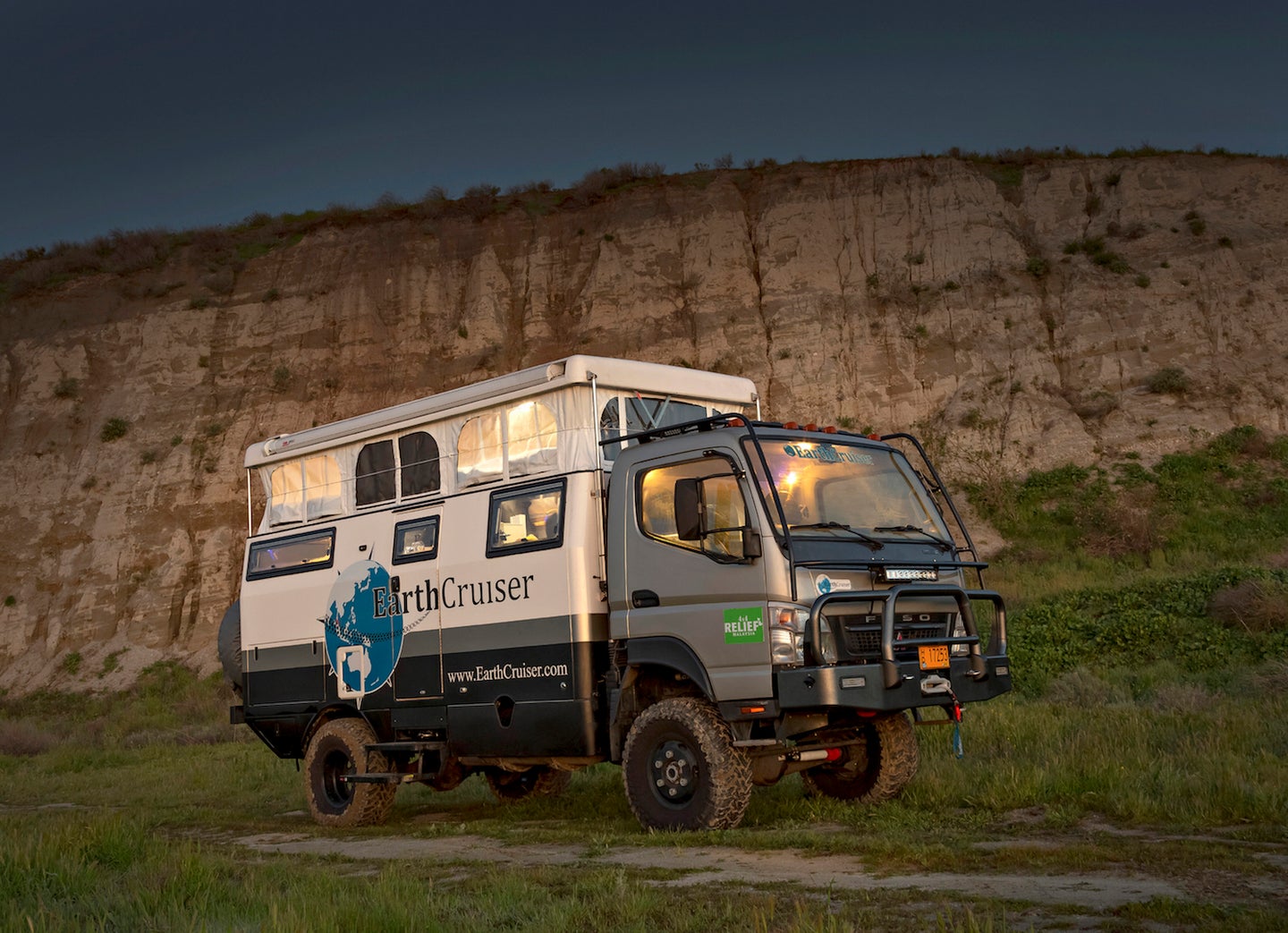 In my years, I have driven almost every make of car on earth: Ferrari, Lamborghini, Rolls Royce, Bentley. I have powered through racetrack corners in Aston Martins, BMWs, Mercedes, Corvettes, and Dodge Vipers. The vehicle I would buy if I could have any on earth right now, however, is uglier and slower than all of them. It’s called EarthCruiser, and it has the drag coefficient of a 12,000-pound mailbox.

It is a chilly afternoon on a blueberry ranch in Simi Valley, California, and I’m sitting in an EarthCruiser EXP with its ingenious builder, Lance Gillies. His yellow lab, Goldy, is lounging in back. A high school dropout from Australia who builds his vehicles in Bend, Oregon, Gillies is explaining the ideological framework of this “landyacht.”

The Earthcruiser is an outsized VW Westfalia

This landyacht begins life as a Mitsubishi Fuso—a commercial truck. Lance then builds it out using components his team builds, in Bend. They even designed their own proprietary suspension. The interior has a bed, a pop top with zippable windows, a table, drawers and counter space—basically a small RV setup that feels more compact than an RV but significantly bigger than a VW Westfalia. Then comes the marine equipment: a toilet that slides in and out of a storage area, a roomy working shower space, lithium batteries under the floor, and a “command panel” that controls on/off to all the equipment: stove top, fridge, freezer, water pump, dual water heaters, interior night lights, flood lights for every side of the vehicle (even under it), an awning that folds out off the roof in 25 seconds, DC outlets that can charge devices even when the keys are not in the ignition…

The toilet tank empties into any toilet with plumbing, so you don’t need a dump station. The water filter allows you to shovel your drinking water out of muddy puddles. (“I do it all the time,” says Lance.) And solar panels imbedded into the roof keep all the batteries charged.

The Earthcruiser is extremely practical—for a reason

Lance is a practical man. There is no customization with this vehicle. “Custom in my opinion is an experiment with someone else’s money,” he says. Why a Mitsubishi Fuso? Because it fits in a shipping container so you can ship it anywhere, and because it’s sold in 70 countries, so you’ll find mechanics in Bombay or Banff who will know how to fix it. Why a 315/75 R16 tire? It’s one of the most popular tire sizes on earth so you can find a replacement in Greenland or Gdansk. Why so much marine equipment? It’s proven to work in harsh conditions, it’s waterproof, and it’s equipment that any marine shop in the world will be able to fix or replace.

Point: This vehicle is specifically built to set you free. “That means whatever it means to you,” says Lance. “These things are bought by people who are not the wannabes; they are for people who are actually going to do it. You need the best tool for the job. You want everything to work, so you can do what you want to do. Chase snow, drive around the planet, whatever you want. There’s no wrong answer.”

At the wheel, I throw the EarthCruiser in gear and motor off road around unpaved fields, creeping up and down grassy knolls. On this lumpy terrain, the vehicle lurches and creeps. You are not in a hurry in this thing; that’s sort of the point. Lance is in the passenger seat answering questions. Although he didn’t do much schooling, he spent his life in the auto biz and feels “pretty comfortable with heavy engineering.” He started building the EarthCruiser in Australia in 2008, then moved to Oregon in 2011, relaunching his business here in 2013. Between the two continents, he estimates that there are nearly 100 EarthCruisers out there today. He himself has driven an EarthCruiser all over Australia, the U.S., and the Far East.

It’s clear he is a world-class insomniac. He has thought through everything in remarkable detail—“a lot of 2 am thinking.” Some examples: The rear camera is infrared, so you can see at night. There’s a hidden safe next to the driver’s seat for passports and perhaps a Glock. The water systems are built using marine pipes that will not break in extreme cold, and solar panels are programed to “sweep” the vehicle, always making sure first and foremost that the engine battery has enough juice to start the motor and get out fast, in case of the kinds of emergencies that can happen when you are adventuring in places where people are generally afraid to go.

The drivetrain can lock in two- or four-wheel drive, so the vehicle has a balanced feel on highways (top speed: 70 mph), dirt roads, or on terrain long after the road has ended. Everything that needs fuel (the motor, the cook top, the water heaters) runs on diesel because diesel is reliably found anywhere.

So what’s the damage? Lance is selling the EarthCruiser EXP for $265,000. (There are three models, and this one is the most expensive.) That’s tens of thousands of dollars more than, say, the new Aston Martin DB11. That’s nearly $100K more than Porsche’s 911 GT3 RS. But think of it this way: What can you do with those cars? You can look at them, you can be seen in them, and you can enjoy the beauty of the engineering and the speed while trying not to lose your license. Some of you will spend the ungodly sums it takes to drive these types of vehicles on racetracks. The homely EarthCruiser is not a dream machine like those cars are, but it is a machine for dreamers.

All of which makes you think: What would you do with one? Chase snow and surf? Hunt authentic cuisines in the Far East? Or perhaps you would just vanish off the face of the earth?

As we motor in the EarthCruiser, I find myself congratulating Lance on launching his company, to which he is obviously and profoundly devoted. He has customers, employees, and all manner of responsibilities that can grate heavily on business owners. (“I am chief floor sweeper,” he says of his works in Bend. “I am literally the dumbest person who works there.”)

“And what if it all goes wrong?” I ask him. He laughs, and tells me that he has been broke before.

“What’s the worst possible thing that could happen?” Lance says. “I get in my EarthCruiser with my wife and we cruise away.”