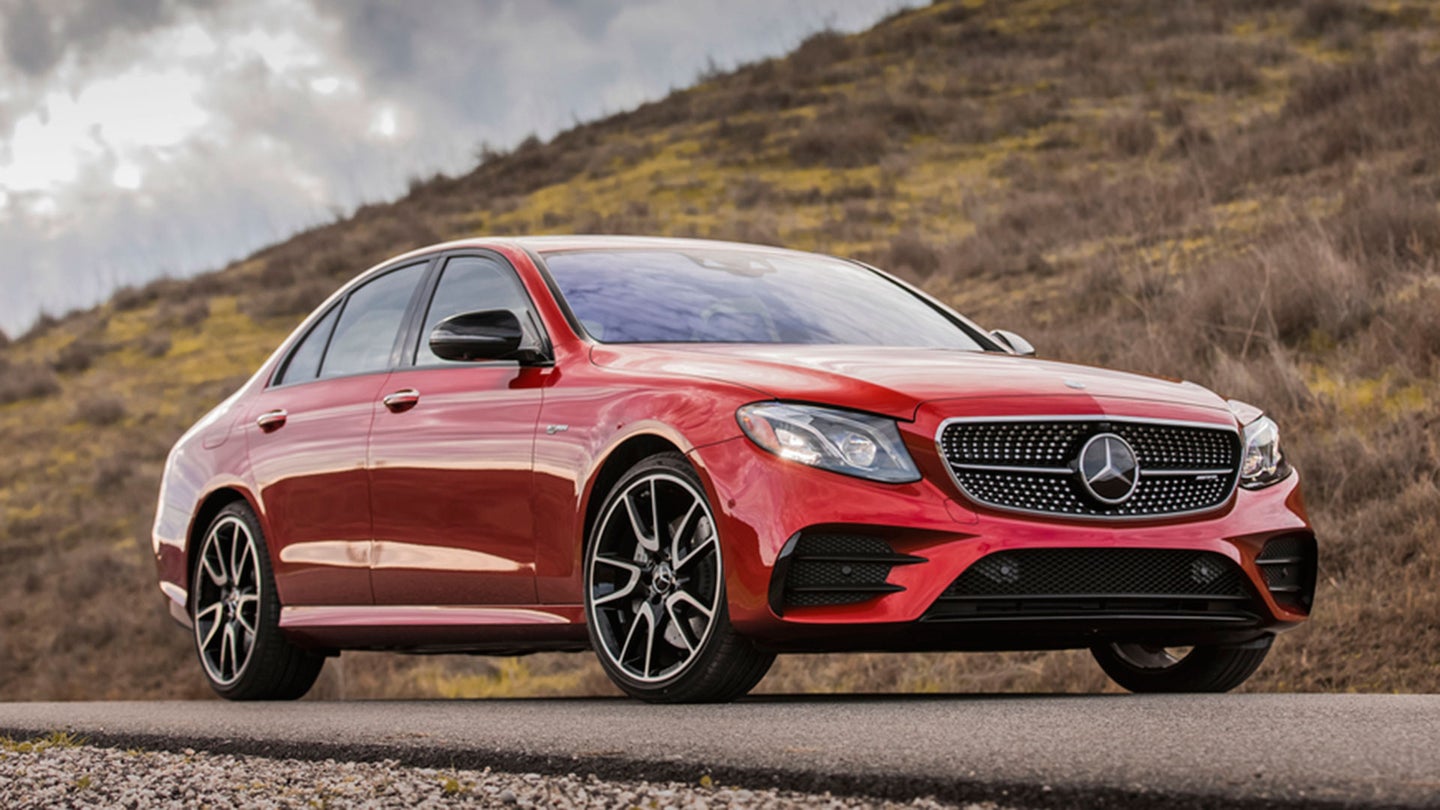 This week, The Drive is out in Los Angeles testing out Mercedes-Benz's lineup of new AMG 43 vehicles.  Rather than deluge you with one massive post on all of them, however, we figured we'd split it up into separate posts with our off-the-cuff first impressions from each car. We already brought you the AMG C43 coupe, the AMG GLC43 Coupe, and the C43 sedan; now it's time for the E63's little brother, the AMG E43.

1. It looks so much more modern than the rest of the AMG 43 lineup. The E-Class is one of the newest members of the Mercedes-Benz family, and it shows. The sleek, understated styling may not stand out the way previous four-eyed E-Classes did, but it's unmistakably new, and unmistakably a Mercedes.

2. Some of the controls seem counterintuitive compared to the rest of the Mercedes range. In all the other cars Mercedes brought out for the media to drive, the volume controls are on the right side of the steering wheel; on the E43, they're on the left. The C-Class and GLC-Class make you toggle upwards on the drive mode selector to make the dynamics sportier; the E43 has you go down. It's not a problem likely to burden many owners, who'll be driving the same car every day for years, but the lack of a common standard does seem oddly un-Germanic.

3. The interior is top-notch. The test car Mercedes-Benz hauled out for us came bedecked in two-tone leather, coffee-colored seats separated from a black dash by sweeping expanses of silver trim and dark-stained, open pore wood. It's elegant, refined, and comfortable.

4. And the technology features are on point. The twin TFT displays—one for the instrument panel, one for the infotainment system—look like something ripped from the Bang & Olufsen catalog. Learning to work them takes some time; don't expect to hop in and sort out how everything works on the fly, but once you figure them out, it feels better-engineered than anything Microsoft has made since Windows 98.

5. It's incredibly quick, but not as fun as the C43 models. The E43 makes a little more power than its smaller cousins, with its 3.0-liter twin-turbo V6 cranking out 396 horsepower, but it still feels a little slower than the equivalent C-Class. You can feel the engine working just a little bit harder to keep up the same pace.

6. It can't hide its size. Compared with the GLC or C, the E-Class feels so much wider on tight B-roads, where every inch matters. It makes for a far more comfortable interior, and on most roads, you'd never notice it...but this big Benz is clearly an open road conqueror, not a canyon carver.

7. It's incredible...but it left me wanting just a little bit more. Like, the E63. The E43 is fast and fleet-footed, and I'd never complain about it...if there weren't a faster, more capable model sitting right next to it in the showroom that offers just as much luxury. Somebody who wanted a C63 would probably be happy with a C43; somebody who wanted an E63 would probably feel a mite disappointed by the E43. But they'd be the only one.