Just the ticket for us wagon ho's. 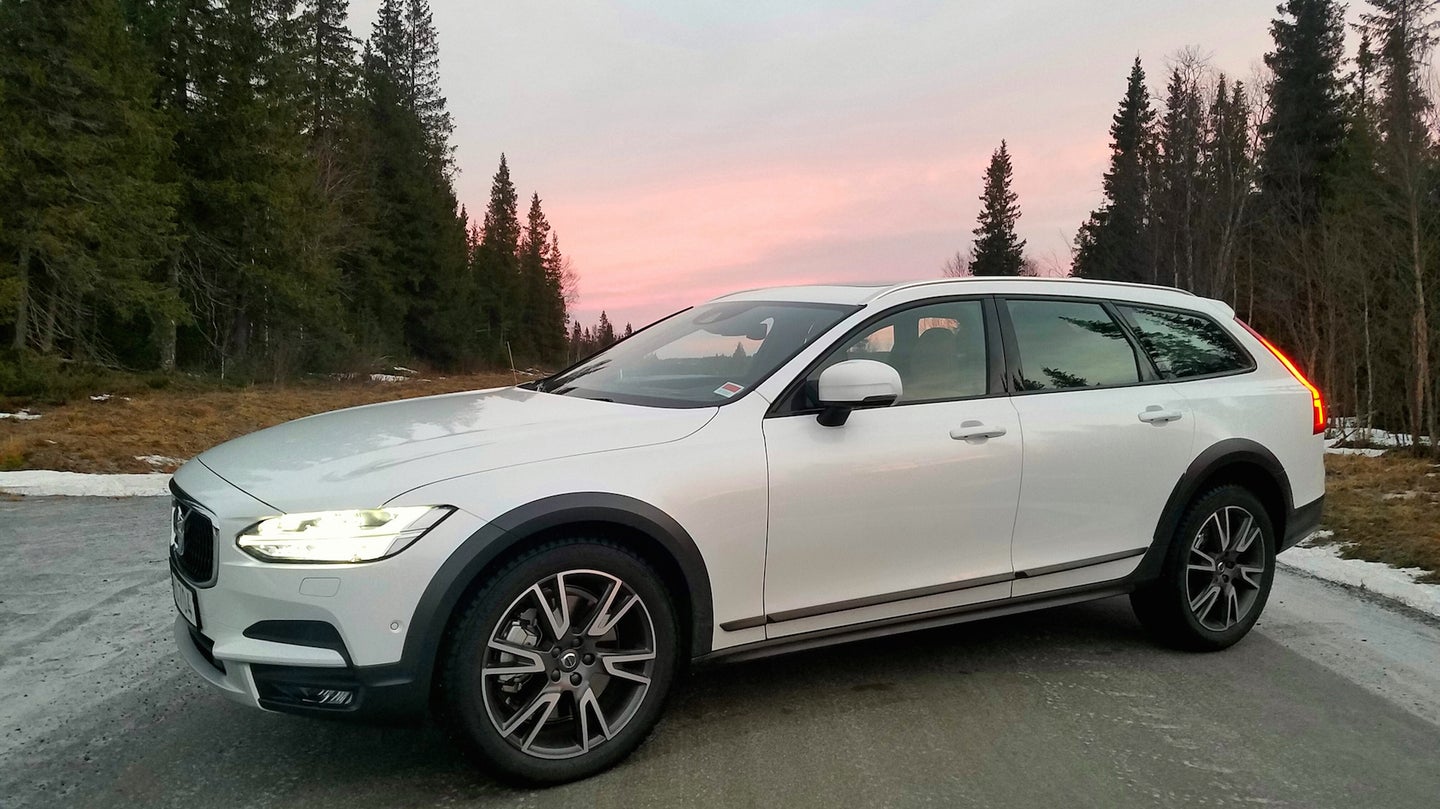 Asking Volvo to defy the tsunami wave of SUVs, all by its Swedish self, is asking too much. But here in Åre, Sweden’s premier-yet-unpretentious skiing destination, the V90 Cross Country smacks my senses like a black-diamond powder run: Why would anyone want a Stepford-suburban SUV when they could be driving this elegant wagon instead?

Leaving aside the question of American tastes, here are seven opening impressions of the 2017 Cross Country, scribbled sans mittens after my opening test drive, including drifting on frozen Lake Andsjön. And check back for a full Cross Country review next week.

Sure, there's some obligatory black-plastic body cladding, and a 2.3-inch lift in ride height versus the standard V90 wagon. But the Cross Country emerges as a proud, almost spectacularly lovely wagon, even if Volvo's cocoon is no longer square.

There's no reason to mess with the things that made the S90 a critical and design smash. That includes the staunch SPA modular platform, creamy and sophisticated road manners, and a luxury interior as airy and refreshing as an icy Nordic plunge. Even sharp-eyed fans will struggle to find telltale interior differences between sedan and wagon, so here are two: Handsome “Pearl Stitching” alternates thicker and thinner stitches on the Cross Country’s seats. And slabs of dark, near-ebony walnut trim replace the sedan's lighter “Linear Walnut.”

The Cross Country sees Volvo sticking with its pledge: Four cylinders or nothing. A 2.0-liter four whose tag team of supercharging and turbocharging produce 316 horsepower is the only propulsion offered for now. As with many four-bangers, the exhaust note is "meh." But it's still good for a 5.7-second sprint from 0-60 mph, so we're not wringing our hands.

4. Hybrid, schmibrid. At least for this car.

Volvo is mum for now on whether the Cross Country will offer the 400-horsepower plug-in hybrid powertrain of the XC90 T8 SUV. But if they do, trust us: The modest mileage and performance gains won’t be worth the roughly $15,000 upcharge.

The Volvo's rear-sloping roof and dramatically forward-raked hatch glass are among its most visually appealing features, but they limit cargo space behind the second row to a modest 19.7 cubic feet; a Honda CR-V nearly doubles its luggage space with 39.2 cubes. Fold those second-row seats, and the official 53.9 cubic feet of total cargo area seems deceivingly low. The actual space is wide and long enough for a serious IKEA shopping spree.

Conformists and other unimaginative types will already scratch their heads over your choice in automotive body styles. So you might as well go full Revenge of the Nerds, and slap on a rooftop cargo box, designed by Volvo to mirror the wagon's streamlined shape. I did a double take when I saw a Cross Country so equipped, with an aluminum-trimmed box that's LED illuminated, mounts in a one-handed operation, and looks miles better than the usual cheap plastic coffin.

You likely won’t see the standard V90 wagon -- minus the Cross Country treatment -- in Volvo showrooms. But Americans can still get one, by special order through a dealer or via Volvo's overseas delivery program. Since the Cross Country starts from $56,205 beginning in March, bargain hunters can wait for summer and the V90. That Volvo will offer front-wheel-drive and a 240-horsepower turbo four in base trim. For fans who want a more-attainable wagon (with a lower, conventional-car ride height), or have no need for AWD, the V90 should shave several thousand dollars off the Cross Country's lofty base price.