By the light of the moon, a torrid affair with the Mercedes baby brawler. 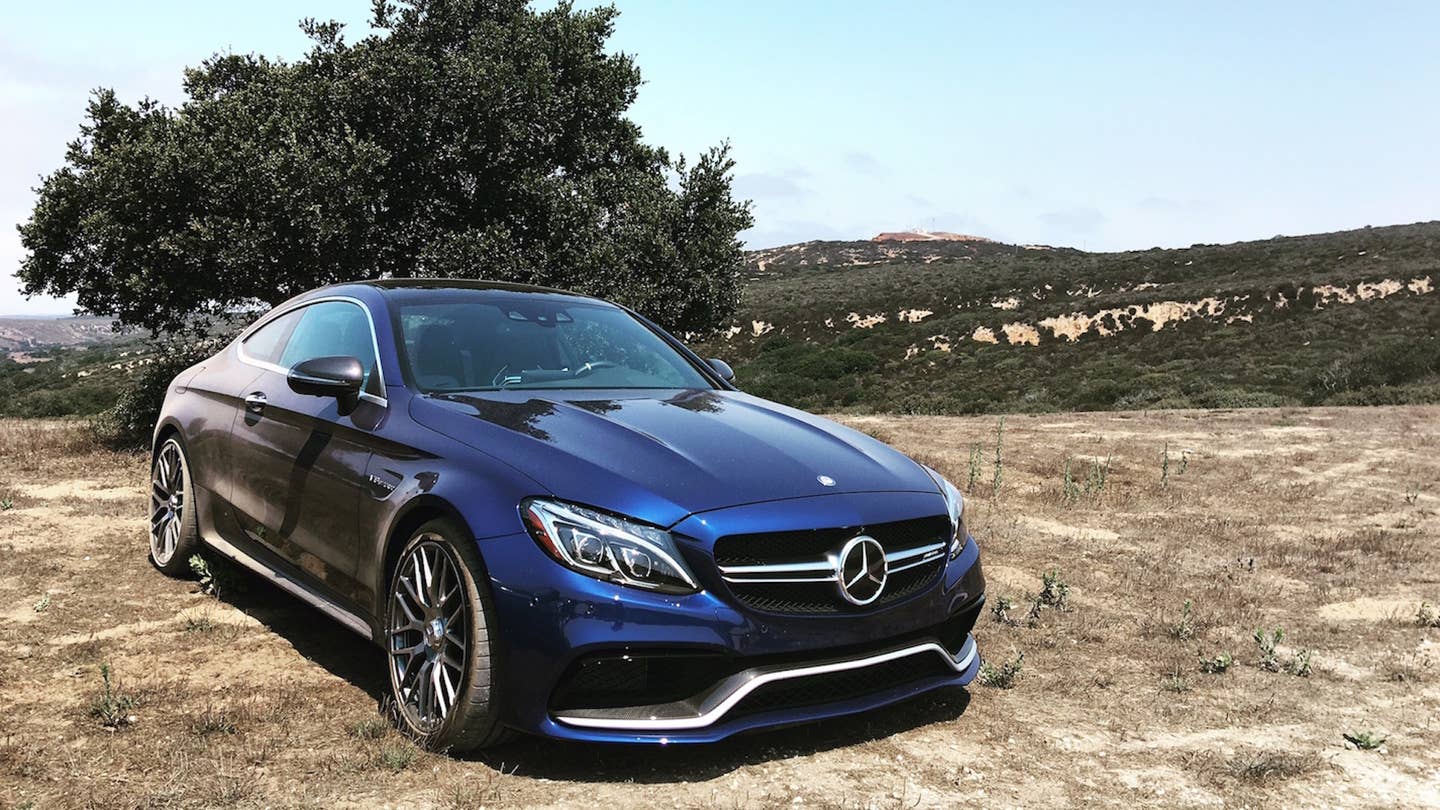 The 2017 Mercedes AMG C63S is not my first romance with a coupe, believe me. That would be the 2012 model of the car, in the Black Series trim—a stripped-down, steroidal two-door that carried the old AMG 6.3-liter V8. Very late one Sunday night, I nearly tore off the Black’s tires.

It was well before dawn on my own little test track, which runs the barren southern border of Greenlawn Cemetery, in Queens, NY. As I powered through the gears and shot past light manufacturing buildings, the 6.3-liter V8 opened and woke the dead, as it were. That’s a car that caught me off guard, which is nice every once in a while. It seduced me with power, smeared lipstick all over my oxford-cloth shirt, and messed up my hair.

The newest version of the C63S is another hand-built lovely from AMG that, after one sultry night together on the Monterey Peninsula, made me forget all about the recent dalliance I’d had in the BMW M4, another girl-next-door coupe that sells for around $85,000 and is custom-crafted for the autobahn. The M4 left me wanting, feeling like there’s more to life.

So during the Pebble Beach Concours d’Elegance, the Caligula of the car world, I found a Mercedes publicist willing to give me his C63S in exchange for my delectable mustard yellow AMG GT S press car. Only a few coupes had made it off the boats in North America. That’s how easy car writers have it: You want an AMG GT S? Sure! Want to trade it for something else? Why not?

On the last night of the Concours, after the prizes are awarded and the zillions spent at auctions, the rest of the world collapses into bed, exhausted from a week of overdressing and over-drinking. Not me. I set my alarm for 1:00 AM and get ready for a night drive. When I wake up there are still glowing embers in my hotel room fireplace. Outside, I put on a layer of fleece against the crisp night. The air is smoked with fog, and a light wind carries the sound of waves crashing onto the rocks off Ghost Tree.

The overhead lights in the parking lot shine onto the deep blue coupe parked beside a fairway. The new C63S is a beautiful car from almost every angle. It has a wider track length than the previous version—wider also than the BMW M4—and that’s immediately obvious. The rear tires are wide, 285s compared to the M4’s 275s. To make space for all this rubber, flared wheel arches offer a pleasingly aggressive attitude you don’t often see in an orthodontist-mobile; they reach out and knock you on the shins.

The hood is a couple inches longer than the previous version, and it has the dual bulges, called “powerdomes,” that are the mark of the AMG and are meant, I suppose, to brag about the terrible beauty of the V8 beneath. On the C63S, the front wheels have 13.8-inch carbon ceramic brakes with red 6-piston calipers, but standard-issue goes in the back. (Here’s a clever cost-savings device: AMG only offers carbon ceramics in the front, where most of the stopping physics collect, so the upgrade costs just $5,450, compared to the $8,150, four-wheel carbon option in the BMW.)

The only weak design point on this exterior is that all the pleasing assertiveness that's accrued up front—the snarly grille, the rising line along the doors, the powerdomes on the hood, those fuck-you fenders—seem to dissipate as the C-pillar meets the trunk, and the heart-rate seems to just drop a couple beats in response.

But they pick up again when I climb into the cockpit and fire up that sexy biturbo V8. The growl sends insects scattering up into the lights. There are four driving modes on the Dynamic dial—Normal, Sport, Sport+, and Race—and I select Sport+.

There’s an engine underneath those powerdomes, bubba, and it’s a thing of beauty. This biturbo V8 is hand-built by the stoics in Affalterbach, Germany, where AMG builds most of its engines, and all of its V8s. Despite having a smaller displacement than its legendary predecessor, it's lost none of its brashness. This engine is the same fundamental powerplant in the AMG GT S I was driving yesterday, as well as the AMG GT R, Mercedes’ terrifying-sounding halo scheduled to come out next year. It's rated at 503 horsepower and a heaping 517 pound-feet of torque.

I cruise slowly to the end of the Lodge driveway, turn left, open my window, and open the throttle. The full force of all eight cylinders makes a demonic sound. With all the emotion they can muster, the Germans call the engine note “emotional.” I call it a savage howl that tears apart the Peninsula’s expensive peace and quiet.

The published speed says this car runs 0-60 mph in 3.8 seconds, a smidge faster than the standard C63 AMG (3.9) and the BMW M4 (4.1). I tap the paddles and shift quickly through the seven-speed “AMG SPEEDSHIFT” sport transmission.

Right turn, then a left, now I’m rising north into the hills. The road narrows and the cypress trees close in, the LED headlights forming a silvery tunnel in the dark night. I rotate mercilessly through each corner, toeing the throttle in an attempt to unbalance the car, but electronic rear-axle limited-slip differential in the S version is too effective. This is an exhilarating car, with style, punch, and more than enough edge to make it something I want to take on a track—far from these beckoning tree trunks.

Driving back to the hotel, I select Comfort mode, softening the dampers and remapping the engine and exhaust. The car matches the mood—quiet and comfortable, ready for a night’s sleep after a hellacious week.