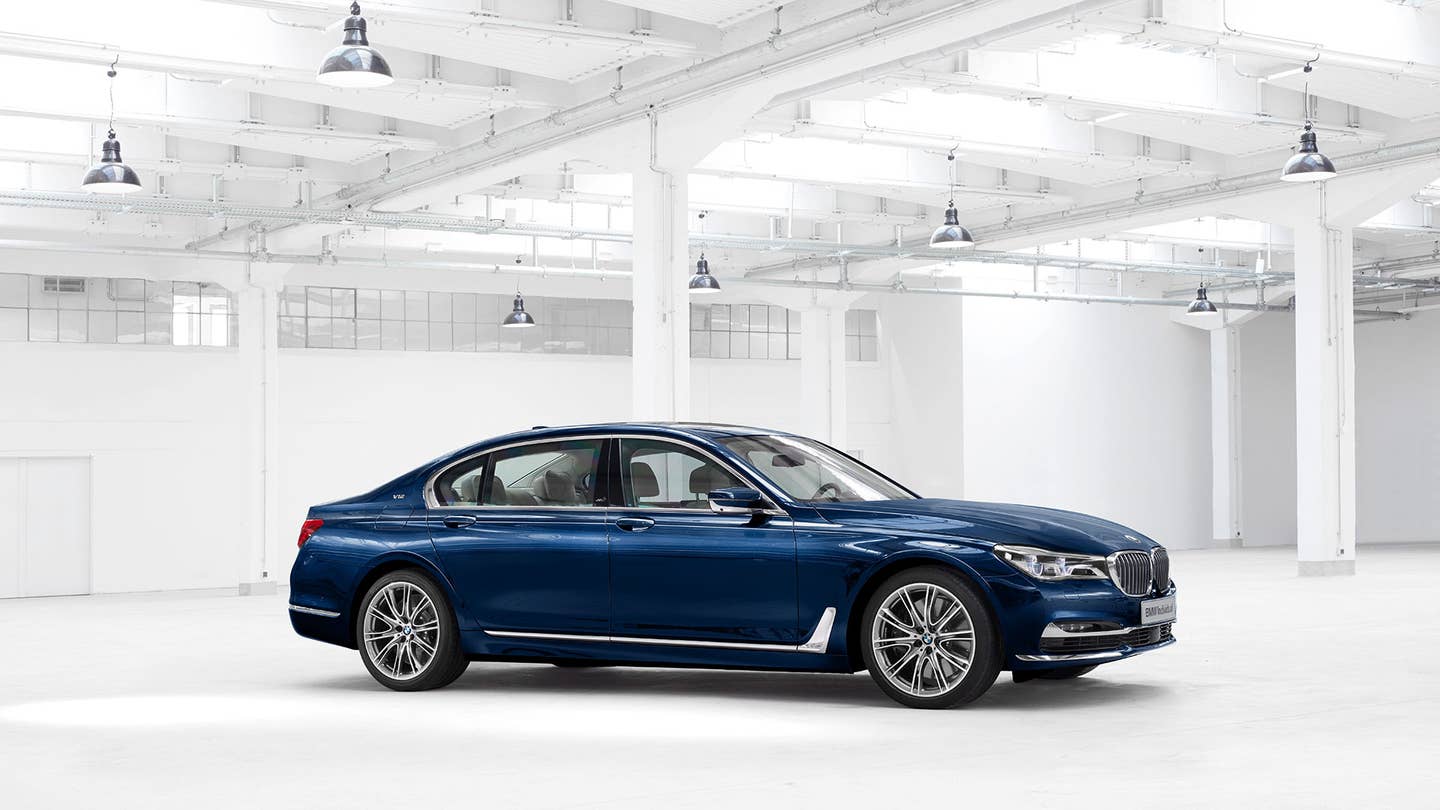 BMW has recently been mocked for its dedication to a cumbersome, silly, and at times misleading naming scheme. Take its small SUV, the BMW X4 sDrive28i M Sport, thirteen syllables of mini sport-crossover mouth fart. Perhaps in response to this criticism, the people at BMW have doubled down by releasing a commemorative-edition 7 Series named, yes, The BMW Individual M760i xDrive Model Excellence THE NEXT 100 YEARS (gratuitous capitalization theirs). Splendid, for a car whose owners will blithely direct the valet to "go get the BMW."

Of course, only 100 units of the centenary-celebrating limousine will be made, and just five will make it to the United States, a bombast-loving country that nevertheless would likely blanche at so much caps-lock. All will be FULLY LOADED, with 20-inch wheels, Merino leather, all-wheel drive and a 610-horsepower V12 engine. For a garnishing dollop of Full Eighties CEO, each of the BMW Rich Kids of Instagram M760i xDrive Supermodel Extravagance NEXT YEAR IN JERUSALEM will come with its own Montblanc pen that will run out of ink before you can finish writing the car's name.

It occurred to us that perhaps BMW named this 7 Series by running a regular car name through several German-to-English-to-Cantonese-to-Japanese-to-Finnish Google Translate sessions. So, we did the same with this article, as you can see below. We have ACHIEVED THIS ARTICLE!

BMW in recent years, and sometimes misleading, to give her name, silly, laugh at his DEVOTION TO THE STUPID. Its small SUV, the BMW X4 sDrive28i M Sport, the young athletes will cross fart 13:00 byte. Perhaps in response to this criticism by people in the name of BMW release, yes, Personal Systems BMW M760i xDrive system, 7 Series Anniversary Edition is excellent for reducing the NEXT HUNDRED YEARS (non-payment of their capital) as a model doubled. Great, the owner does not care. Salesmen "WILL GET A BMW."

Of course, only 100 cars centenary CELEBRATIONS held in the United States only five years to do so, such as loud, the country so much that you can lock LOVE OF COUNTRY. All 20-inch wheels, leather bound, in the V12 motor drive four-wheel drive and 610 horsepower has been filled. Leave your name before, written in the '80s and Chief Executive Officer (CEO), all rich kids came from the BMW M760i xDrive system Instagram MONTBLANC supermodel JERUSALEM pen ink runs out in their agreement in FULL SWING NEXT YEAR. YOU CAN NOT WRITE HIS OWN NAME.

This is done in the US session, several German business English Cantonese Finland BMW 7 Series sedan, which is expected in Japan after the project is likely to name. As you can see below, we have ACHIEVED THIS ARTICLE.