This Is the Worst Custom Car in the World

What began life as a BMW X6 now harbors more croc skin than the Everglades. 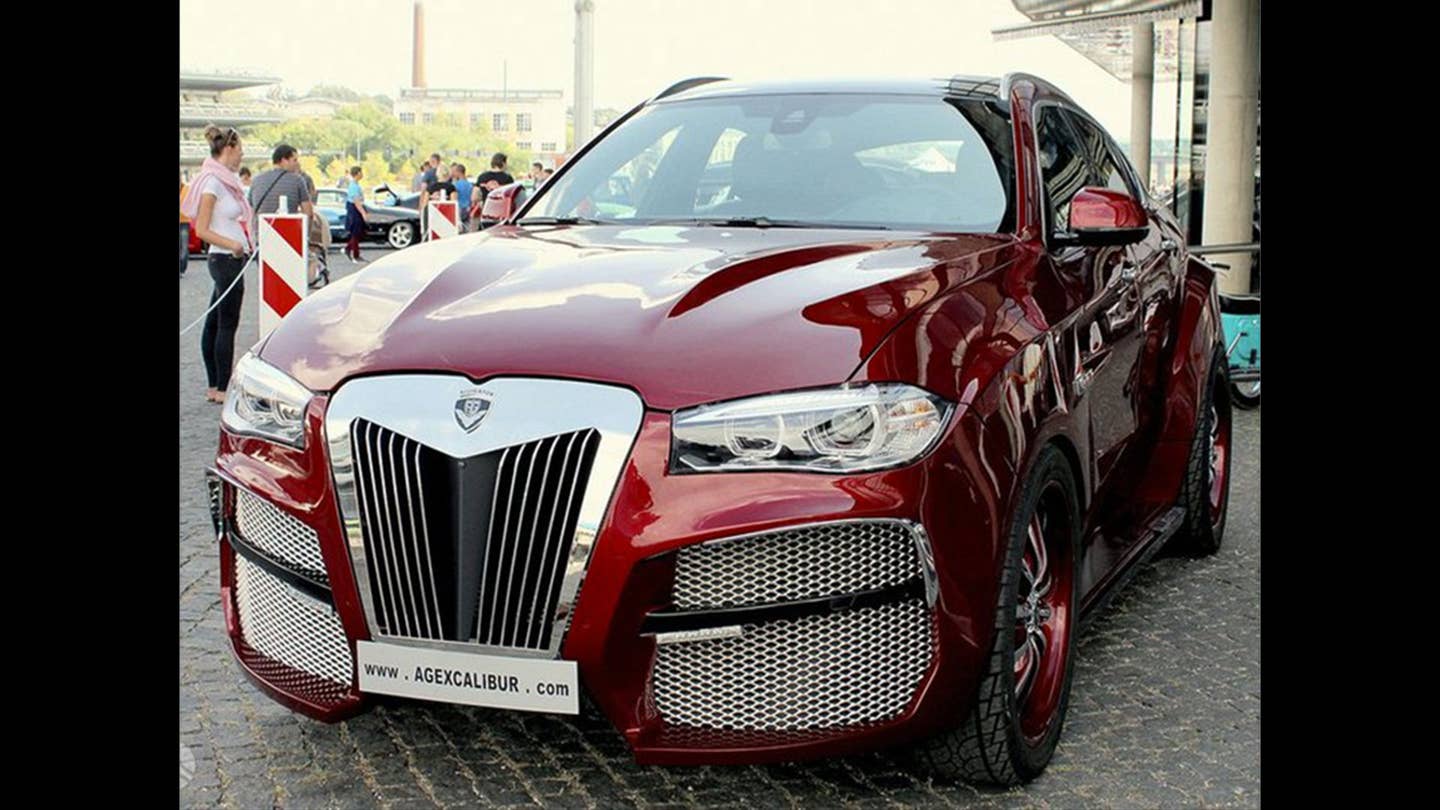 Besides Beyonce’s mysteriously collapsible pregnant belly, I am not really one for conspiracy theories. Most of life’s objects and situations, per Occam’s Razor, come to exist via the simplest means. Earth is just a lucky space rock; nobody could maintain a meticulous Paul McCartney impression for forty years. Still, this absolutely catastrophic BMW X6—a glittering pustule scraped off the floor of a Lithuanian discotheque—leads me only to conclude that the entire former Eastern Bloc, with Russia at the forefront, is a sham set up by CIA for our entertainment and to legitimate the maintenance of our robust nuclear arsenal. Look at this customized BMW, this surly sparkle-potato, in its grotesque face and tell me otherwise.

My partner in reporting this monstrosity is Google Translate, who notes that this 2016 BMW X6 3.0d is for sale in Lithuania for £90,000, or $128,556. (And that the “handlebar” is “to the left.”) For that baronly sum, you get the Bavarian brand’s ugliest model, with all of its worst attributes accentuated, enlarged, painted in red and dipped in chrome. It’s akin to a plastic surgeon going rogue and augmenting his clients’ muffintop. Love handles? How about love armoires?

Take the X6’s pavement-scraping front spoiler, which been ripped off, and replaced with a mesh-filled shovel. Or its already-engorged behind, which has been further plumped with enough hog lard feed Paula Deen’s brood for a week. Then, massive strakes were applied throughout. You know, because pasting shark gills on a humpback really makes it sporty. The custom exhausts look like a bauble stolen from a sci-fi B-movie starring Denise Richards; the wheels, unequivocally, are the worst round objects in the world. Worse than a searingly hot bagel bite. Worse than Prince Albert piercings. Worse than Steven Tyler’s mouth.

The interior is similarly blasphemed. An ordinarily nice BMW cabin has been slathered in crocodile skin and carbon fiber, and what look to be hood vents from a Mercedes C-Class. Imagine the inside of King Arthur’s scabbard, were he a sturgeon-poaching oil baron who may or may not hunt bears from a helicopter with Vladimir P. himself. That metaphor really works out, actually, because this isn’t even a modified BMW X6. It is an Alligator Excalibur. Merlin strike me dead. Or at least take my eyes.