SUV-obsessed Americans may profess allegiance the Dodge Demon, but their guilty pleasure is actually the Nissan Rogue. 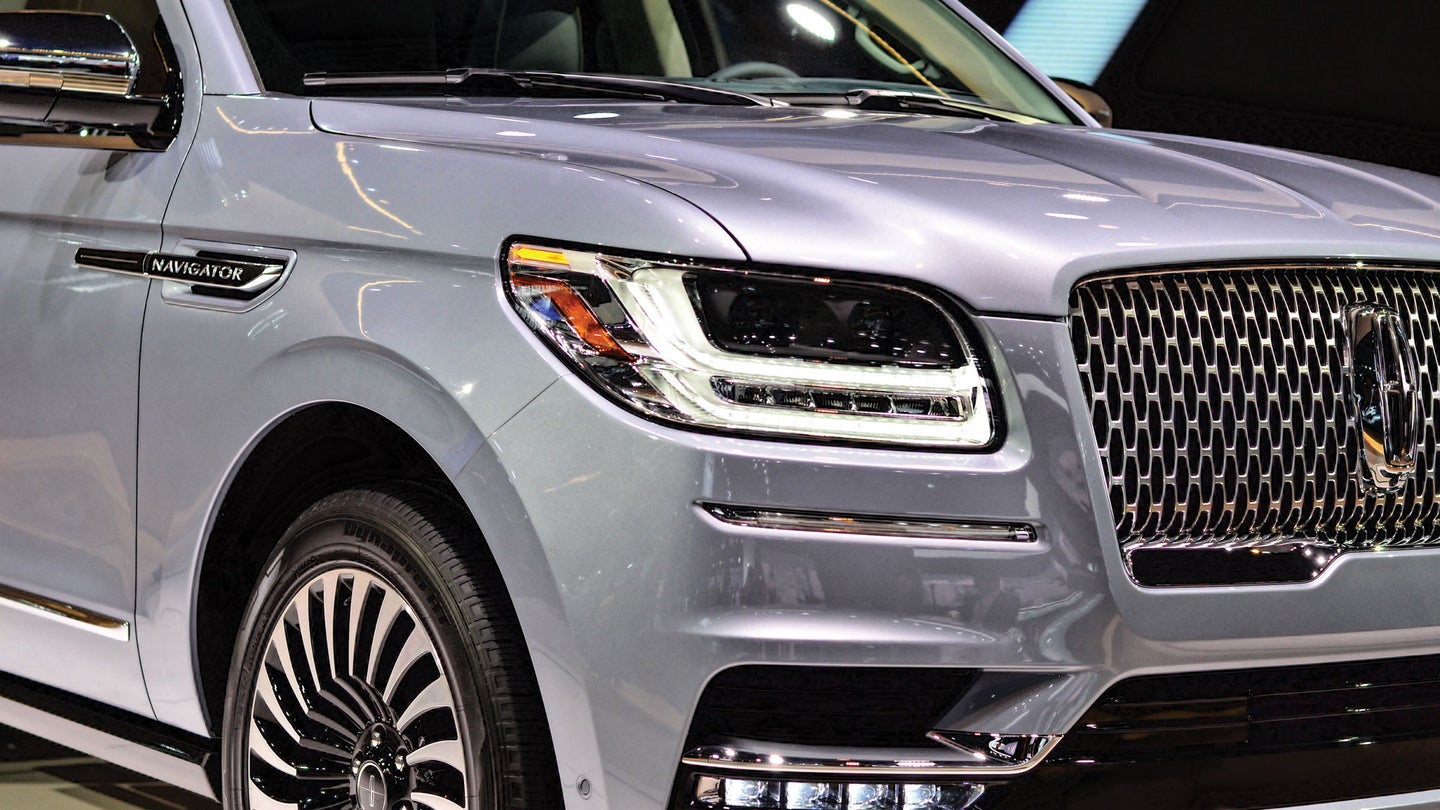 The Dodge Challenger Demon is duly noted as the wheelie-popping, street-legal drag queen of the New York International Auto Show: 840 horsepower, a 9.65-second quarter-mile, blah blah. But the fact is, most car consumers would probably fall harder for the Nissan Rogue Dogue, the puppy-hauling concept version of what is suddenly America’s best-selling SUV. Or, for that matter, any of the big-dog SUVs or Chihuahua-scaled crossovers that are littering auto show floors and seemingly every driveway in America.

Here in New York, the relentless market takeover of the SUV was perhaps best exemplified by the 2018 Lincoln Navigator, the show car’s newly smoothened body and interior resplendent in a matching shade of amethyst blue. Not so long ago, Lincoln’s biggest SUV was widely dismissed as a prehistoric pig, seemingly existing only so critics could pick over its carcass. Now people are interested again, and the Navigator’s 450-horsepower Ecoboost V6; 30-way adjustable, French-leather thrones; and sheer Costco bulk may put in back on the American map alongside Cadillac’s Escalade. (But do watch out for a potential bait-and-switch on the interior, just as the Lincoln Continental concept’s posh cabin was dumbed down for showroom consumption).

The Nissan Rogue is the king of all cars

Nissan showed its new Rogue Sport, a downsized version of the Rogue crossover that will take on subcompacts like the Honda HR-V. Normally, I’d devote two sentences to a seeming niche model like Rogue Sport, but suddenly attention and respect must be paid: The Rogue Sport’s entire class didn’t even exist five years ago. Now it seems no crossover is too small to become a viable option for Americans who seem utterly bored by traditional sedans, hatchbacks or wagons. The larger, low-key Rogue itself is defying all predictions, shooting past even the mighty Honda CR-V and Toyota RAV4 to find a remarkable 329,904 buyers last year. That’s more than any car or SUV sold in America. It’s also the fourth-best selling model of any type, trailing only a proudly “Murican trio of pickup perennials.

That bears repeating: Set aside the Ford F-Series, Chevy Silverado and Dodge Ram pickups, and America’s favorite car is... the Nissan Rogue.

How crazy is the exodus from cars to SUVs? Dan Passe, Nissan spokesman, said that 60 percent of the brand’s sales were cars in 2014, 40 percent pickups and SUV’s. In barely two years, sales of car models have plummeted to 53 percent of the total, with light trucks well on pace to deliver the majority of Nissan sales.

“It used to be that Altima was the perennial sales leader, but now it’s Rogue—and by a lot,” Passe says.

Weirdly shaped or unusually scaled crossovers were once the oddballs of every auto show—think the original Scion xB, Nissan Juke or BMW X6—they’re now the popular kids, firmly in the mainstream. Mercedes, which has used an explosion of SUV models to dominate American luxury sales, pulled three more from its bottomless hat in New York: The Mercedes-AMG GLC63, GLC63 Coupe and GLC63 S Coupe. We’re talking Toyota RAV4 sized SUVs, only stuffed with hand-built biturbo V8’s with up to 503 horsepower and 516 pound-feet of torque.

Like some other journalists, I used to get upset when I saw too many SUV’s at auto shows, clogging up my views of Ferraris and Aston Martins. I’d bemoan the jejune tastes of consumers, shake my fist at the cynical, pandering automakers. But there seems no use in getting as bent out of shape as the aforementioned GLC coupe. At this point, it’s like shouting that there are too many pawns on the chessboard, and hoping they’ll all turn into queens. It’s just not how the game works.

Sports cars are even more niche

In a 180-degree reversal, it’s the cars that increasingly feel like the niche products for the show’s dustier corners; however uncomfortably for enthusiasts (like a lot of us at The Drive) who assumed that conventional sports cars, sedans or hot hatches would forever dominate the discussion. At the risk of being flippant, New York brought us a flagship sedan, the LS 500 F Sport, for stubborn old folks who still subscribe to newspapers, and will soon be dead. The Audi RS3, a $55,000 take on a Honda Civic Si that’s perfect for an Audi salesman, but only if he’s under 40 and takes home a shitload of money. A 500-horsepower Porsche 911 GT3 with an available stick, for the gentleman industrialist who just bought his racing license and a team to go with it. The Buick Regal Sportback, for the woman who secretly wanted an Audi A7. Oh, and the Dodge Demon, for the 17 people in America who decided a Hellcat isn’t expensive enough. Make that 13 people, because the other four can’t afford the tires.

Is the Honda Clarity just a cultural curiosity?

Hell, one of the most technically and culturally interesting “cars” at the show can only be had in California: I drove the Honda Clarity, the hydrogen-powered midsize sedan, prior to the show, and was impressed with its near-silent operation; along with a finely engineered fuel cell—roughly the size of a desktop computer—that supplies electricity for a 366-mile driving range, with fill-ups in five minutes or less. (Check back for a full review on the Clarity). Unfortunately, there are so few places to find hydrogen in the Golden State, roughly 26 at last count, that Honda will give lease customers $15,000 in free hydrogen just to lease the thing for three years.

A pair of wagons stood out as even more iconoclastic than usual, considering the sport-ute onslaught: The lovely Buick Regal TourX wagon, showed alongside its Saab-esque Regal Sportback cousin, only underlined that Buick sees the pointlessness of offering a standard  Regal sedan. Porsche won’t call the Panamera Sport Turismo a wagon, so allow us. The hottest hauler this side of a Ferrari GTC4 Lusso adds square footage to what was already the most practical of the four-door GT’s.

Top Players Among the SUVS

Taking stock of all the SUVs in New York would require several Wall Street quants, but let’s hit the highlights:

Volvo showed its 2018 Volvo XC60, a scaled-down, more-affordable version of its hit XC90, which maxes out with a 400-horsepower hybrid powertrain in T8 trim. The Subaru Ascent concept shows the mega-popular brand aiming for bigger game, with a genuine three-row people hauler that will aim squarely at the Ford Explorer, Toyota Highlander, Honda Pilot and now Volkswagen Atlas. (A showroom-ready 2018 Ascent will be unveiled in Los Angeles in November).

Land Rover pulled out the flowery prose to celebrate the Range Rover Velar—bigger than an Evoque, smaller than a Rover Sport—and it sounded convincing in the plummy British tones of sauve design chief Gerry McGovern. But suspect that the new Land Rover Discovery, with seating for up to seven, is the more persuasive and significant model for them: It’s notably roomier and more off-road-capable than the Velar, and its $49,900 base price should undercut the Velar by about $5,000. The Jeep Grand Cherokee Trackhawk adopts the 707-hp V8 from the Challenger and Charger Hellcats, good for a 180-mph top speed. Enjoy its unhinged approach while gas is still hovering around $3 a gallon. Because when fuel prices spike and the middle class gets hosed and foreclosed again, the perhaps-$85,000 Trackhawk may become the biggest cash sinkhole since the Hummer. I’m not saying I don’t want to drive one, but I would like to remind people that when the party is over, you don’t want to be the one wearing the lampshade.

The best of the concept cars

Aside from the striking, four-door Mercedes-AMG GT Concept—the kind of candy-apple poison that Snow White or her prince would kill for—the show’s coolest concept by far was the Toyota FT-4X. Looking like a Kia Soul by way of Burning Man, the Toyota features a North Face tent for a center armrest, grab handles that double as water bottles, and a funky multi-action liftgate—picture a spaceship airlock—with a warm box to keep your long underwear toasty and a cool box to chill some craft beers. The Toyota is a campground fantasy seemingly fueled by peyote and dreams of FJ Cruisers.

Lawrence Ulrich is the The Drive's Chief Auto Critic. Email him at lawrence@thedrive.com