Almost a decade into its life cycle, the F-Type’s aesthetics and V8 rumble have held up nicely. The way it drives, however, is another story. 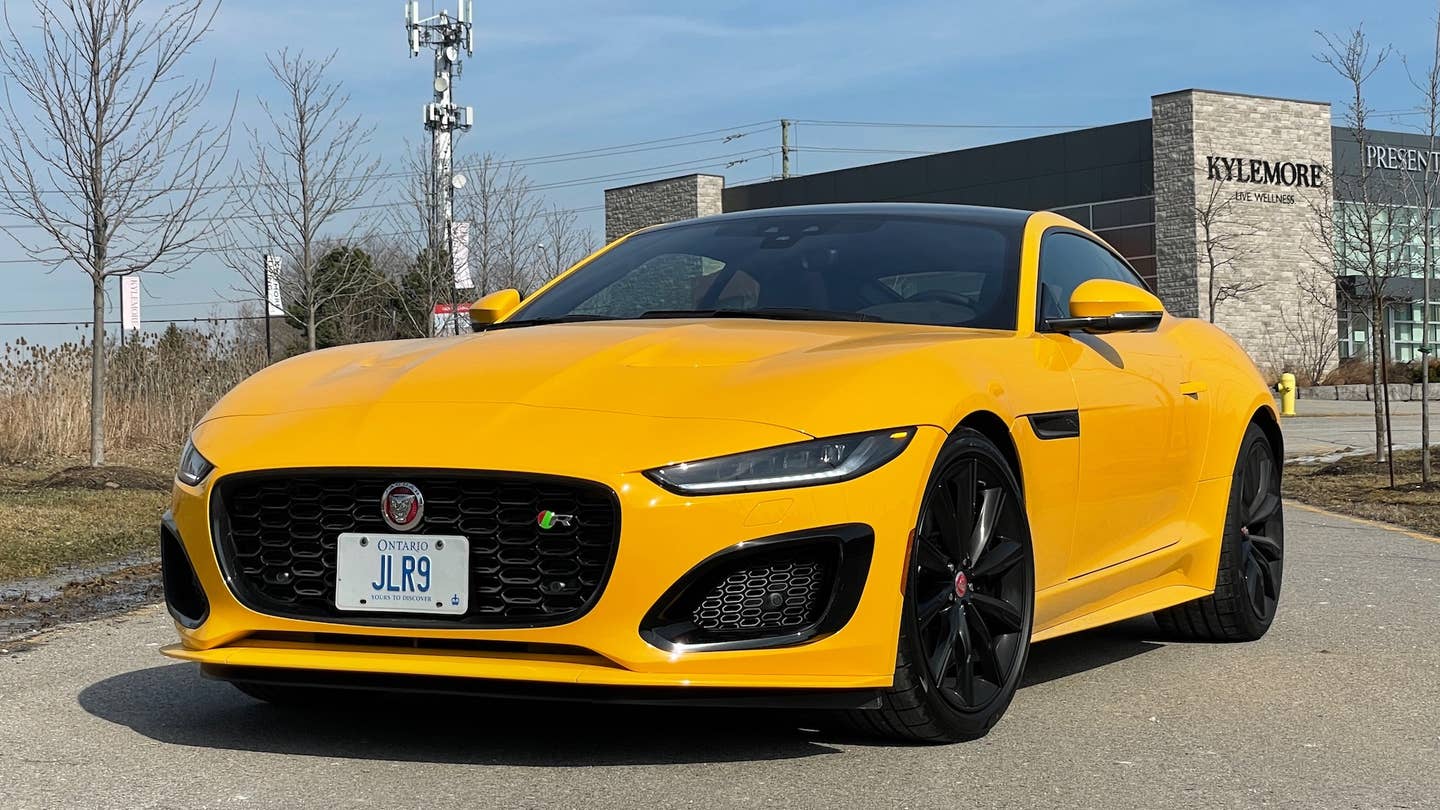 I could feel him staring from the other car. Stopped at a light, I looked over to my left, and lo and behold, a boy—no more than eight or nine years old—had his face pressed against the window of what I'm assuming was his mother's minivan, transfixed by the 2022 Jaguar F-Type R. And who could blame him? It's a gorgeous car and the bright yellow paint the tester came in isn't exactly inconspicuous.

We made eye contact and—because it's what I wanted every Cool Car Guy to do every time I came across a Cool Car when I was his age—I put it in neutral and gave it a couple of heavy revs. His face lit up, thumbs-ups were exchanged, and, hopefully, his day was made.

From the outside looking (and listening) in, the F-Type is undoubtedly quite the thing to behold. But, as it turns out, the driving experience doesn't quite measure up to its own visual and aural drama.

*All figures in CAD unless otherwise noted.

This late in the game, the Jaguar F-Type shouldn't need much of an introduction. As a design, it's been around for almost a decade—more if you count the 2011 C-X16 concept from which it was clearly based. In December 2019, Jag revealed the facelift you see plastered on the car here, and probably due to the fact that our collective interpretation of time was massively warped shortly afterward, the F-Type's refresh somehow simultaneously feels both brand new and something that happened a lifetime ago.

Purely from an aesthetic standpoint, though, I'm still pretty lukewarm on it. Don't get me wrong, the F-Type as a whole remains a stunningly proportioned sports car, with side and rear-end designs that are still as gorgeous as when they first came out. The very extraverted $6,100 CAD Sorrento Yellow paint is a delight. But to me, the reworked front end isn't really an improvement over what came before. I tried to like it and held out hope that it would grow on me, but after a week of being in its presence, its squintier headlights that have been moved to below the hood and facial pareidolia mean it still reminds me of Fudgie the Whale.

On the inside, it's... fine. The 2021 model year refresh gave it a fully digital 12.3-inch instrumental cluster but the overall design is unchanged from the cabin that came in the F-Type when it first arrived nine years ago. This makes it quite old—that big passenger-side center grab handle that felt so gosh-darn cool back in the day can now be found in the Hyundai freakin' Elantra. On the other hand, the $1,300 CAD fixed pano roof (fixed, as in it doesn't open) makes sitting inside feel a lot less claustrophobic, and I'm still a sucker for the air vents that rise out of the dash only when they're needed.

This is a sports car, though, and if it's a winner out on the road, who cares if it's got a relatively unremarkable interior, right? In that department, the F-Type is... also just sort of fine. In this most powerful R form, power comes from a 5.0-liter supercharged V8 pumping out 575 horsepower and 516 pound-feet of torque, the same numbers as the discontinued SVR and limited-run Project 7. A ZF eight-speed auto and all-wheel drive mean 3.5 seconds to 60 mph and a top speed of 186. That zero-to-60 time means the fire-breathing Jag will keep up with an unbridled Ford Mustang Mach-E GT Performance Edition. But where it handily beats that EV—and every single other EV out there, in fact—is in the audio department.

Let me make this clear: The noises produced by this car's V8 are, far and away, the best part of the F-Type R (er, maybe except for that rear three-quarter view). Coming out of a quartet of very purposeful-looking, upward-tilted exhaust tips is the sound of gravel being pelted out of a giant, firecracker-powered pressure washer. Rolling down the window and giving it the beans every time you enter a tunnel (and you will do this at every tunnel. It's a contractual obligation as part of this car's purchase agreement, I'm pretty sure) sounds like God pulling on the metal ripcord of the world's largest, gnarliest Beyblade. It's machine gun-like in its quality and, from behind the wheel, felt just as loud. (Also adding to the sense of occasion is an active rear spoiler that can clearly be seen in the rear-view mirror, rising up at speeds north of 70 mph.)

Acceleration was undoubtedly strong and served up with a luxuriously smooth demeanor, garnished with an appropriately rowdy kick in the back of the head on hard upshifts. Paired with the weapons-grade audio, flooring the F-Type R feels like a deliberately cushy and measured way of giving yourself adrenaline. Like if the fitness center at the Four Seasons started offering kickboxing lessons.

In the hands, the two-door Jag steered and moved with an... acceptable level of precision and poise, but its handling doesn't urge you to push as much as its exhaust does. The way it moved was also just flat-out less entertaining than the way it sounded. It wasn't bad in the corners but neither is, say, a normie-spec Mercedes-Benz C-Class. And considering what this is and what it looks like, that turned out to be a bit of a letdown. The eight-speed auto changed gears on paddle-operated request quickly, as the ZF eight-speed is wont to do. Meanwhile, the F-Type R's brakes—380mm up front and 376mm in the back with calipers that say "Jaguar" on 'em—ultimately did their job well but are attached to a pedal that was slightly squishier than how I'd like a top-tier performance car's brake pedal to feel.

The Janky-Yet-Charming Aspect of It All

In the interest of starting this section on a positive, the seats look quite cool.

But they weren't remarkably comfortable to sit in, nor were they positioned particularly purposefully in relation to the steering wheel and pedals. The dead pedal was somehow too narrow and uncomfortably placed, and—it has to be said—there was considerable road noise on the highway and the ride definitely erred on the side of stiff. All that, in my view, made the F-Type a no-go as a grand tourer.

What's more, the infotainment screen looked washed out and consistently took, like, a full minute or two to go dim after pulling into my underground parking garage, meaning both it and the digital gauge cluster remained blindingly bright while I was trying to not scratch the car against a bunch of concrete posts. The $1,050 CAD, 12-speaker Meridian audio system sounded pretty meh when I could hear it over the road noise, and the stitching on the passenger door hilariously did not line up with the same stitching on the dash. I wouldn't have minded this if it showed up in a cheaper sports car, but seeing as the F-Type is being sold to people for about $106,000 USD in 2022, it's a bit ridiculous.

So, the Jaguar isn't quite as sharp, daily-able, or well-built as a BMW or a Porsche. But surely, the art—the looks, the noise, the aura, the slightly janky-yet-charming aspect of it all—make this a car worthy of recommendation. Right?

Eh, kind of. When it came to matters of the heart, the one car I kept comparing it to in my head was the Lexus LC 500. They both have two doors, they both have 5.0-liter V8s, and neither would look out of place on a proverbial automotive best-dressed list. Like the Jag, the LC isn't quite best-in-class when it comes to hoonability, either, so these two are battling on intangibles. And when it comes to intangibles, the LC blows the F-Type out of the water.

The Japanese car arguably looks better on the outside and its impeccably built, art deco interior is frankly in an entirely different league than the F-Type's. The LC's more musical and high-pitched voice also sounds better than the Jag's rougher, brasher supercharged racket. Here, have a listen:

The Lexus also scores bonus points for being a bit of an underdog in this particular arena. Jags are supposed to be ridiculous, beautiful, and emotional. How'd it get outdone by the company responsible for the Toyota RAV4? (Spoiler alert: Money. The answer is money.)

Keen readers of The Drive may have noticed that we've recently started assigning numbered scores to our car reviews. When this was first mandated by the powers that be, I wasn't a huge fan because distilling a car and all of its flaws and virtues into a single number is frankly a difficult task that feels like a disservice to my craft and the different degrees to which one reviews a car. But in the case of the F-Type R, I knew what that number would be within an hour of driving it.

This is firmly a seven out of 10 car. It does everything just well enough to make it a decent weekend ride for those who love its specific visuals and exhaust audio. And... that's kind of it. The week I spent with it was quite enjoyable, but when it was over, I didn't feel myself yearning to drive another F-Type again. Sure, it looked and sounded plenty exciting in the moment but there are a lot of other fish in the sea. Fish that are better put-together, more fun to drive, and—believe it or not—look and sound even better than this.

It's the sort of car you rent on your honeymoon in England because it feels right—and even then, only if all of the Astons have been taken already. It's like a Lexus LC but worse in all of the ways that matter. And for the outraged spec-sheet racers who will undoubtedly rebut this by reminding me that the F-Type R has about 100 hp on the Lex: Cars are driven on tarmac, not paper, and out on the tarmac, the LC is the one to have.

With all that said, there is something inherently cool about climbing into a bright yellow two-seater that was built in a place called Castle Bromwich. I just wished that feeling would've lasted a little longer after setting off.

Got a tip or question for the author about the F-Type R? You can reach them here: chris.tsui@thedrive.com

It’s got the looks, brains, and brawn to conquer anything you throw at it on and off the road.

The XF is Jaguar’s only sedan left, but it’s good to drive and priced lower than other European competitors.