A 400-horsepower Lincoln shows old dogs can learn new tricks. But is it worth the price of admission? 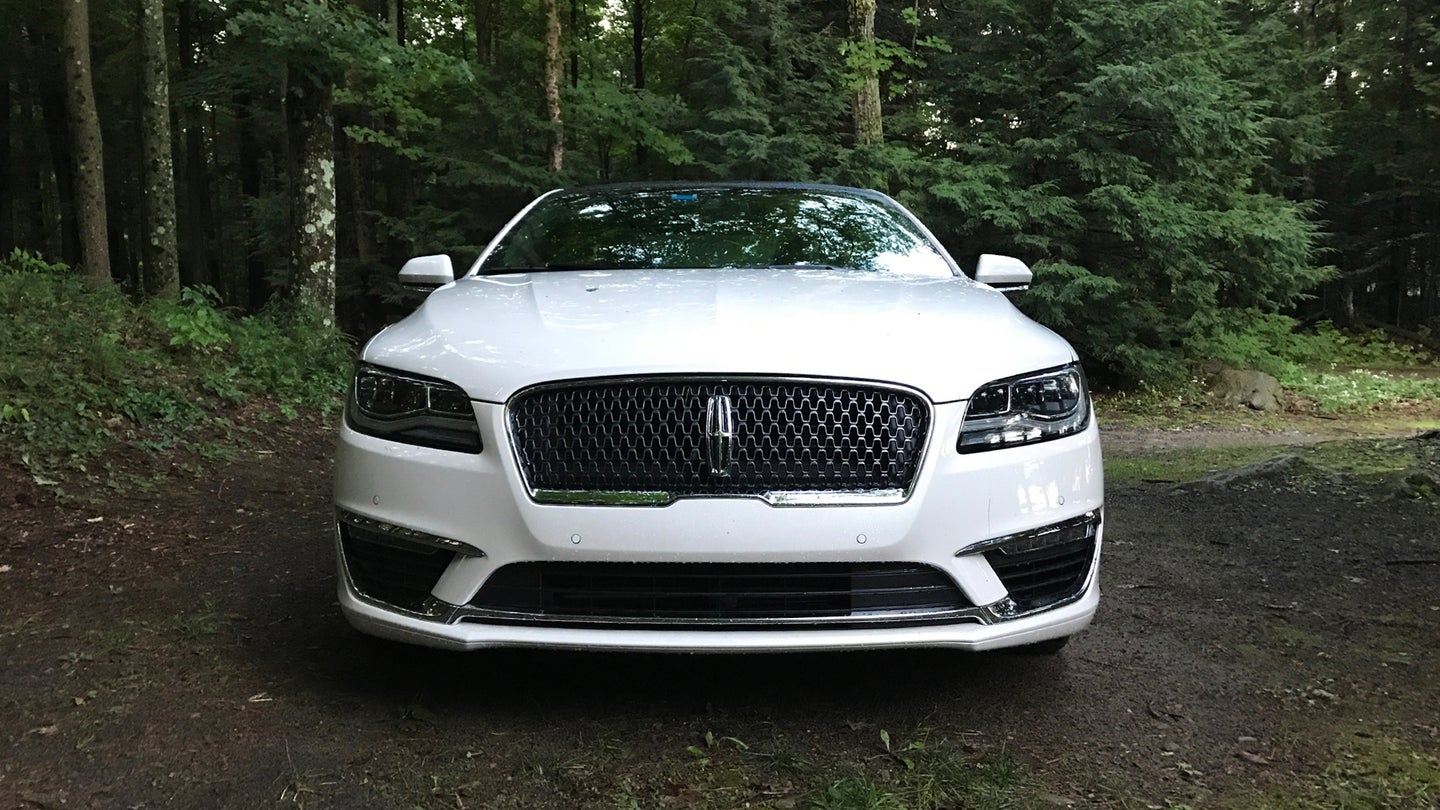 to Critic's Notebook, a quick and off-the-cuff car review consisting of impressions, jottings, and marginalia regarding whatever The Drive writers happen to be driving. Today's edition: the 2017 Lincoln MKZ Reserve.

World War II ended 72 years ago, but echoes of the conflict are still bouncing around the hallways of Dearborn and New York. How else to explain the way the standard-bearers for American luxury have become obsessed with beating the Germans at their own game? After decades of listless bloat and creative stagnation, both Cadillac and Lincoln emerged from the recession with the sleek, sporty sedans of Deutschland squarely in their sights. So for the past seven years, it's been out with the old, musty trappings of domestic opulence—boat-like suspensions, La-Z-Boy seats, and lazier engines—and in with the stylish, tightly-wound mystique of their European competitors.

And while you can spend all day mocking the way things used to be, it does feel like some quintessential parts of American luxury are sorely missing from current high-end domestic offerings. I'm not saying things were better when you could fit 20 bodies in the trunk of a softly-sprung Town Car, but there was a comforting grandeur to the old vanguard that's missing from the flashy new recruits. For all their faults, the cars both U.S. luxury carmakers made in the closing years of the 20th Century were all remarkably self-assured, no matter how terrible they really were. Building on nearly a century of experience, they had arrived.

But in this new era, it's back to square one. They're the new kids, anxious and unsure, and they've each taken a different approach to fitting in. With its lithe, rear-wheel-drive sedans and V Series division, Cadillac wants to steal buyers from BMW. Meanwhile, Lincoln's path has been less clear. Its high-end moves, like re-introducing the Continental as a flagship sedan and further fancifying the Navigator, seem targeted at Mercedes-Benz. When you look at its whole lineup, though, the attempts to shape the mushy concept of "generalized luxury" into something marketable call Audi to mind. And let's not even get into those Matthew McConaughey ads.

It's exactly that kind of split thinking that led to today's subject. The Ford Fusion-based Lincoln MKZ has a slick design inside and out, a 400 horsepower, twin-turbo engine, the same torque vectoring all-wheel-drive system from the Ford Focus RS, and loads of fancy tech. But it's also caught between two worlds, like a middle-aged American tourist who's not quite sure about the gimp suit he just put on in a Berlin nightclub. To see which side it lands on, The Drive borrowed a 2017 Lincoln MKZ Reserve for a holiday weekend slog from New York City to the beautiful Adirondack Mountains upstate and back.

It's been clear for a while now that Lincoln is determined to leave behind the days when American luxury meant floaty land barges and rich Corinthian Leather (though that one was a Chrysler invention, to be fair). But what's less clear is how exactly they intend to make that happen. With its powerful engine and sporting pretensions running headlong into the company's basic impulses, the 2017 Lincoln MKZ Reserve is something of a product in search of a market. It's not a bad car by any means, but it is disjointed, and it's fair to say that a $60,000 car should have a more thoughtful, settled feel to it.

You can't expect automakers to turn on a dime, or outrun their legacy overnight. When Lincoln first announced they'd be hotting up the MKZ back in 2015, the overarching industry reaction can be best described as "pleasant surprise" rather than "excitement." No one looked at this as a real potential Audi-killer, because that's not how buyers act in the real world. A car with comparable specs is not automatically a competitor—just look at the Koreans' attempts at moving upmarket in America. But what it did show was that the company was finally getting serious about defining itself with something other than a vague notion of general luxury.

How successful they've been is another question entirely. The reintroduced Lincoln Continental is a good look for the brand, even if it is built on the same front-wheel-drive Ford platform as the MKZ. The new Navigator is also finally here, and both those vehicles are big and brash enough to give Lincoln a little bit of cultural cache as they continue to trickle down into the real world. It's working well enough, with overall brand sales still above the nadir of the immediate post-recession era (and forget about the mid-Aughts, when Lincoln had exactly four models to pick from). But products like the 2017 MKZ are frustrating in what they get right, like a big engine, and what they still get wrong, like a confused interior and a dated platform.

There is a market for a $60,000 Lincoln sedan, but I'm just not sure this is it, and the relatively low sales numbers (about 2,300 a month this year) back that up. Ford probably knows this too, hence the half-done redesign to at least get the new corporate grille on there before debuting an all-new, third-generation model sometime in the next few years. That will be the real test to see if Lincoln has learned its lesson: You come at the king, you best not miss.

The 2017 Lincoln MKZ Reserve, By the Numbers

Number of butt massages received over a weekend of driving: 13

AMG turns the C-Class convertible into a macho ride—and gives drivers the best way to hear the engine’s roar.