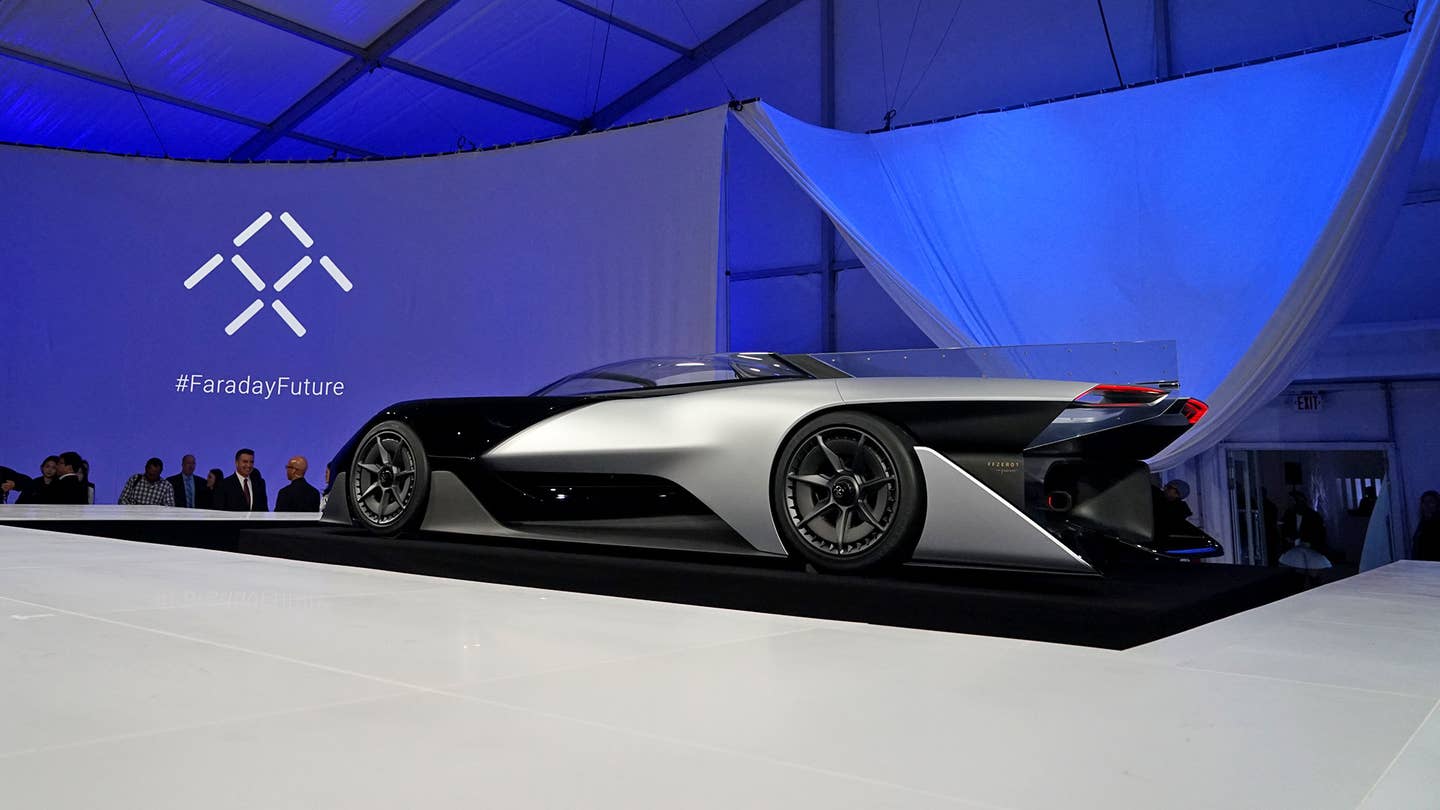 The real-deal Faraday, the Faraday they meant to show, the Faraday that’s supposed to change the world, is something completely different. I’m utterly convinced that Faraday is onto something, but it has almost nothing to do with the entertaining monstrosity that was unveiled.

Do you remember this period? Life was pretty good. I didn’t know what the Segway was going to be, but I hoped and dreamed it would live up to expectations. Those boys at Segway sure knew how to build buzz. They promised to redesign our very lives by revolutionizing transportation. I drank all the Kool-Aid and decided to call my best friend Paolo and make a bet:

If the Segway was an actual Teleportation device, he had to buy me one.
If it wasn’t, I had to buy him one of whatever it actually was.

Come Dec. 3, 2001, we were both pretty disappointed, because an electric wheel-board with a handle was not anyone’s idea of how to change the world. Today such things are called Hoverboards, even though they’re just Segways without a handle. Lame then. Lame now.

Life After the FFZero1

Faraday has done two things perfectly. It has assembled a great team and generated incredible buzz. That buzz orbited the idea that they were going to “change the world.” As Apple did. Apple comes up a lot with Faraday. The startup has attracted some shining lights from Google, BMW, Tesla and, indeed, Apple.

Faraday seems to have sufficient talent and money to go head-to-head with Tesla and Google on EV and Self-Driving tech. There’s so much talent in-house that just a few days ago, a high-ranking Audi official asked me if the whole apparatus was just a front for Apple’s Project Titan. I said no, for reasons that deserve another story.

Faraday’s first public event was so highly anticipated that we had to see something transformative. It needed to be the automotive equivalent of the first iPod, or iPhone.

Ohhhh, the FFZero1 is shocking, but not in a good way.

It’s not bad, per se. It’s definitely interesting. It contains all the things Faraday promised, and more. It’s all electric. It’s all-wheel drive. It’s fully autonomous. It’s got 1,000 hp. It’ll do zero to 60 mph in three seconds. That’s all great, but utterly meaningless, because you can’t buy one. It will never do those things. It’s a concept.

The Lyons LM2 was a concept, too.

Even if it could do 0-60 in three seconds, how far would it get after a few launches?

I wasn’t the only Faraday fanboy at the unveiling, and let me tell you, this wasn’t what Faraday fanboys wanted. I don’t care about supercars, electric or otherwise. I wanted to see the future, and the future isn’t about supercars. You’ve already seen hints of the Faraday we were supposed to see, if you’ve paid attention to the vehicle silhouetted in Faraday’s teasers.

There’s only one possible explanation for the FFZero1. It’s a cover story for something having gone wrong with the real Faraday car, which forced them to roll out the only other thing they had lying around their secret location.

Perhaps the real Faraday concept caught fire last week. Or was accidentally crushed by a semi. Or had a some massive electronic failure that would have sunk the brand more than showing the shell of a supercar.

Someone at the unveiling suggested the FFZero1 reveal mirrored Tesla’s reveal of the Roadster, and that Faraday’s plan was to follow this up with a sedan, then an SUV. That would make sense, if the FFZero1 weren’t vaporware. Nothing I saw last night suggested that the car is anything more than a shell. It didn’t move under its own power. The interior systems didn’t light up. The car in its promotional video looked like CGI.

Because one thing about the FFZero1 does make sense. It supposedly sits on Faraday’s Variable Platform Architecture (VPA), which allows for multiple battery and motor configurations. Nick Sampson, VP of engineering, said as much, suggesting that the FFZero1 was a cool way to showcase VPA.

If that was the plan, it was a misfire, because with buzz like Faraday had, the only cool way to showcase VPA would have been to show the FFZero1 side-by-side with the car we all expected, preferably in a cutaway.

The FFZero1 looks as confused as the decision to show it, like something rushed through the design process against the wishes of anyone who went to design school. It’s crazy and ambitious and wrong, but just interesting enough that the brand just bought itself six more months to get a real, viable concept ready.

Whatever happened, Faraday’s PR people should all get raises.

The Real Faraday Is Coming, and This Is It

As you can see, the FFZero1 looks nothing like the two cars in the official Faraday images released a few months ago. There are clearly two cars here, one larger than the other, but similar in profile.

The one I saw was the larger one, with several people standing beside it.

How did I come to see the real Faraday? Sadly, I can’t explain, but let’s just say that I got a glimpse of a car. A big car. Almost minivan-size. Bigger than a Mercedes-Benz F 015 Concept. Something that could fit five to seven people. Something like a Model X, but bigger and cooler and more futuristic. You can see its rear in the bottom pic, and its silhouette in the top pic, where it’s the larger of the two concepts in shadow.

The real Faraday is some kind of insane offspring of a minivan and a Citroën XM. Like a bloated Ford Scorpio or Renault Avantime. Think… a megapod family transporter, or a Megavan—fully electrified and autonomous—like something out of Sleeper or the original Judge Dredd comics. It is far more daring and revolutionary than anything from anyone else, although the F 015 is its spiritual brethren.

I wish we had seen that, so I wouldn’t have to show you my crappy car-drawing skills. Here’s the best I could do in two minutes, from memory:

Sorry, that’s all you get until The Drive can wrangle, steal or finagle a real picture. I sure hope I don’t get blacklisted. I’m really rooting for these people.

More on VPA in the coming days, which is very interesting, assuming we can find any real differences between it and, say, Volvo’s new architecture. Also odd is the recent departure of Faraday’s battery expert. There’s clearly a lot more going on behind the scenes.

I want to believe. I really do. Faraday, please show us what you’ve really got.