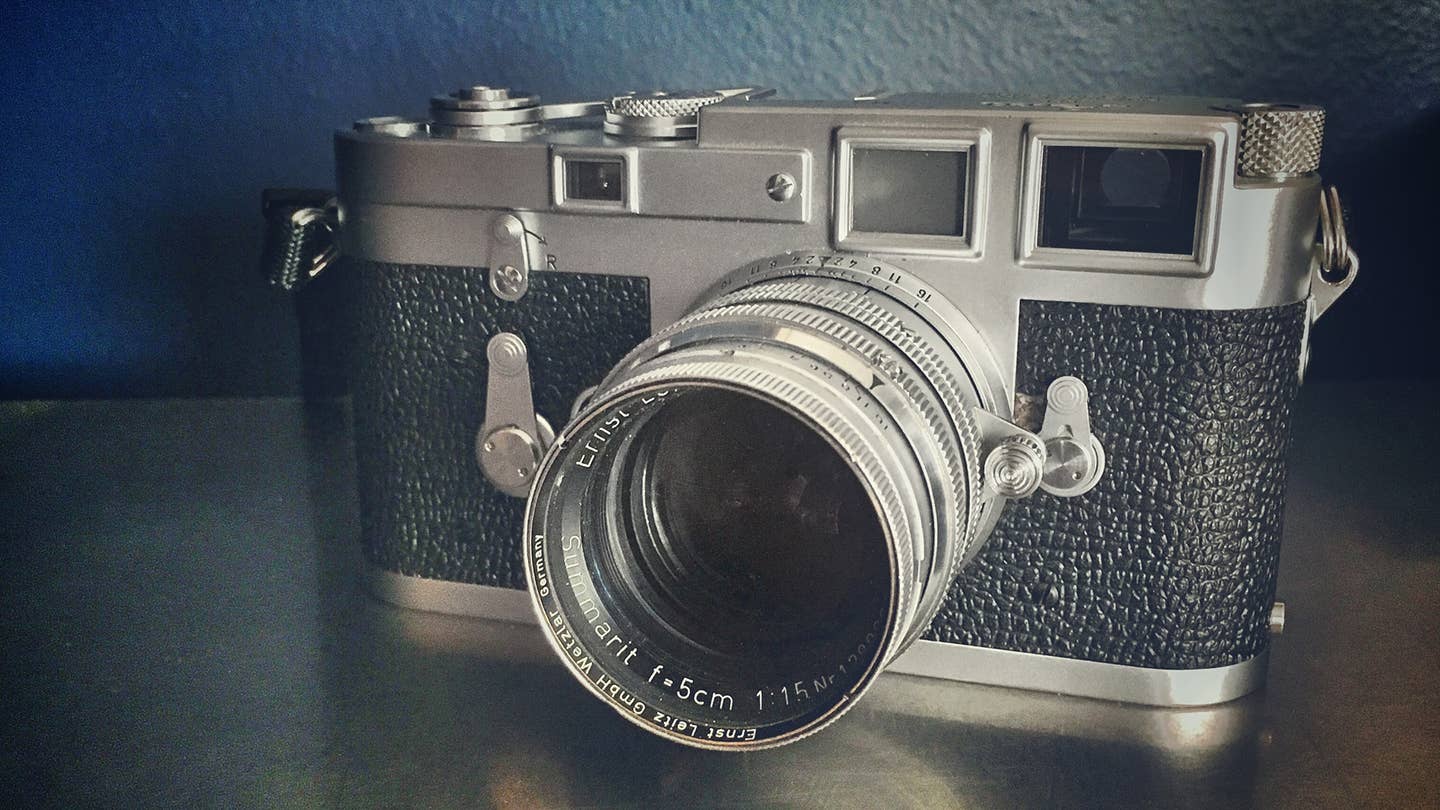 Optional Accessories explains our love and irrational attachment to our favorite heirlooms, objects, gear and gadgets.

It was the M3 that made Leica a legend. Incorporating a bayonet mount and a bright, accurate rangefinder, the Leica was a giant step forward for ergonomics—and its precise German optics made for great images. But it wasn’t just that. The M3 was compact, and unbelievably durable. And it was quiet. The camera quickly became a favorite among war photographephrs and photojournalists.

The list of users and adorers of the M3 is long and distinguished. There are photographs of the Queen of England and Elvis and Miles Davis enjoying their cameras, but it was the professionals that made the little camera legitimate—men and women shooting on the street, or out of trenches, or in Vietnamese jungles. They made it sing, and a great many iconic images were taken on the M3. Alongside the Graham Hills and Fabrizio Meonis of the racing world, these people were my heroes, and alongside Lotus 49's and absurdly large KTMs, it was the Leica M3 that I lusted for.

There's a precious familiarity to a Leica M3, even if you're not a photographer. The influence of it's design—so German, its form so clearly following its function—has come to rest on many of the things we use and touch and lust after every day. From the iconic pairing of crinkled vulcanite and silver-chrome, to the precise indents of the shutter speed dial, or the buttery movement of a Zeiss lens. Car designers reference Leica constantly. In turn, when Leica needed a leg into the modern era of design they looked to Audi to help advance their Leica T. Apple's Jony Ive, likely the most influential designer of our era, was no doubt inspired by the simplicity of Leica's design. When asked to create functional one-off designs for HIV charity Product (RED)'s auction, Ive and designer Marc Newson collaborated on two products: a metal desk and a Leica. This time when design came full-circle, the hammer price for the Leica was 1.8-million dollars. This is all to say that, after a hundred years in the business, Leica's cameras are very nearly as iconic as the images they help make.

My Leica is a new acquisition. The M3 went out of production in 1966, almost 40 years before I graduated college with a degree in visual journalism. After spending the first year of my professional career shooting film, I’ve never had the nostalgic fondness for celluloid that younger generations of photographers seem to. Film is a dick. It's fussy, clumsy and inconvenient. And the Leica is analog everywhere. Entirely mechanical. Focusing is manual, exposure data comes memory and experience. Even years shooting Leica's, they're still absurdly slow to load, and ridiculous by modern standards. Those 36 hand-cranked shots are great when you make them count. The 2000-something I get on a bomb-proof solid-state 128gb card? Better.

I don’t harbor any mistaken notions about the M3. It's an antique. It won’t make my photographs better—the Sony A7RII I shoot for work is a superior camera by almost every measure. But, like a vintage car, the Leica will make me work harder. It'll make me remember old tricks, find pleasure in mechanical sounds and good design. And it’ll look good doing it. I wouldn't have it any other way.