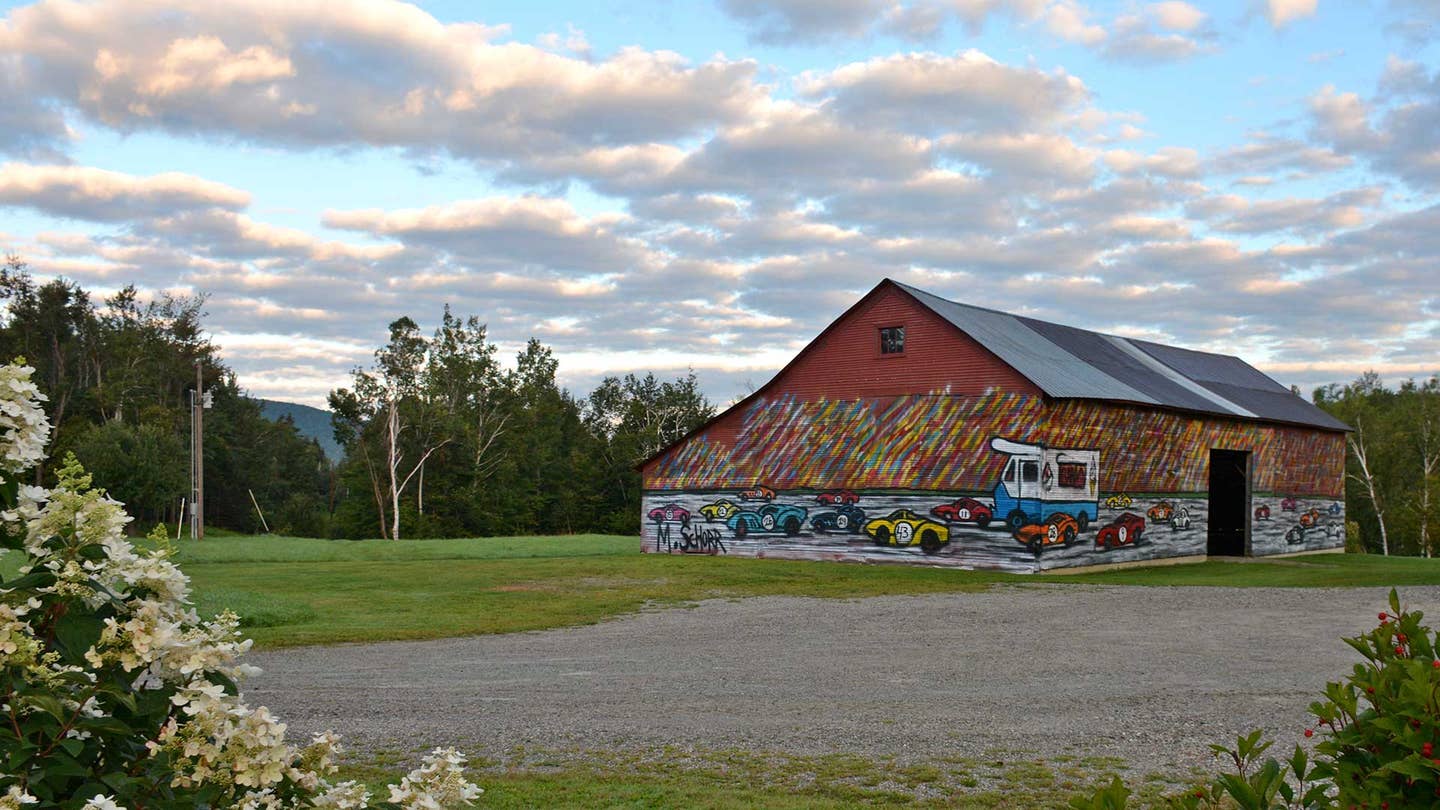 If you have any affection for cars or graffiti or art or pretty colors, and happen to have spent time in Manhattan, you’ve probably seen the work of Mitchell Schorr. The artist’s delightful mural series Da Race—in which an old-school Mister Softee ice cream truck is pitted, on a track, against an ever-changing amalgam of rainbow-hued vintage sports cars and Kojak-era police cruisers—has been appearing on buildings, barriers, security gates, sidewalks, fences, garage doors and temporary construction walls around the island for the past half-dozen years or so.

“In New York, there were over 40 of them,” Schorr explains, sitting on a black leather couch in his central casting aerie—a double-height, pyramidical, skylit rooftop studio in an innocuous Times Square office building. “But, you know, they kind of disappear. What happens is, the buildings get torn down.”

The temporality is part of the point. Schorr’s paintings are rooted in reminiscence and evanescence. “Da Race originated from two series being put together,” he says. “I was doing paintings of ice cream trucks, which was about memories of my youth. And I was doing race cars, which were actually a similar sort of thing, about being a kid and playing with cars and trading cars. And then I figured I could combine the two on a street project where it’s similar every time, but different.”

Da Race is thus in perpetual flux. It’s a moving project, seen in staid snapshots. It’s an ongoing idea, fragmented into pieces. It’s a recollection, rendered tangible but fleeting. And it’s about cars, in our nation’s most car un-friendly city.

“Each successive location serves as a snapshot of the ever-progressing nip-and-tuck auto race,” Schorr writes on his website, “keeping the viewers in suspense about the eventual winner.” But there’s never a winner. Or even a finish line.

Schorr grew up in New York and studied art formally at Carnegie Mellon, Ithaca College, the New York Academy of Art and the De Medici Institute in Florence, Italy. But having come of age downtown in the Seventies and Eighties, he revered the street artists of the day, particularly Keith Haring. It is he who inspired Schorr to sign his real name to his work, an uncommon practice among street artists, for whom “permission” to paint is not always sought, granted or desired. “I see it as making the neighborhoods look nicer. But I guess everybody has their own view on things,” he says.

“It’s about cars, in our nation’s most car un-friendly city.”

Having thoroughly bombed New York, Schorr has recently expanded Da Race, garnering commissions in Burlington, Vermont, as well as Grand Rapids and Detroit, Michigan. The Burlington locations included an old red barn, fulfilling a dream of Schorr’s. In Grand Rapids, he painted a bus. But it is in the Motor City that the work is featured most prominently. Among 10 locales, it is a part of the art-laden, subterranean, rails-to-trails “urban recreational path” known as The Dequindre Cut, as well as just below General Motors’ headquarters, the Renaissance Center, in River Walk Park. Schorr even had a painting purchased by the Detroit Institute of Arts in 2014, his first museum acquisition. “They called me at the beginning of the summer,” he says, “and said, ‘it will be hung.’”

Next up for Schorr is a series of automotive-related art projects in Hong Kong. He has long painted commissioned portraits of vintage vehicles, and some of this work was brought out for the Hong Kong Classic car show earlier this month. He’s also painting a mural installation there destined for a hotel lobby. And, of course, he wants to continue his ice cream truck and racecar series. “They’re trying to get me to do some other stuff throughout China. Like, bring Da Race to China. So, we’re working on that now.”

Large-scale projects await closer to home, too. We exit his studio, and walk up a flight of narrow stairs to the roof of the office building. There, executed on a grand scale, is a giant Da Race mural, completed at the behest of the building’s managers.

“I’m actually trying to get more roofs, to convince the real estate company to let me do roof projects for all of their buildings in the city,” Schorr says, as we step over pipes, ducts, vents, tiles, shingles and flashing, all incorporated into a wild, three-dimensional mélange of Softees and low-slung grand tourers. “My goal would be to try and get Google involved in the project—do something that could only be viewed in full through Google Earth.

“That’s kinda some weird goal,” Schorr says. “I have a lot of weird goals.”