PodRide is the Volvo of Velomobiles

A Swedish designer seeks backers on Indiegogo for polar-bear-approved half car, half bike. 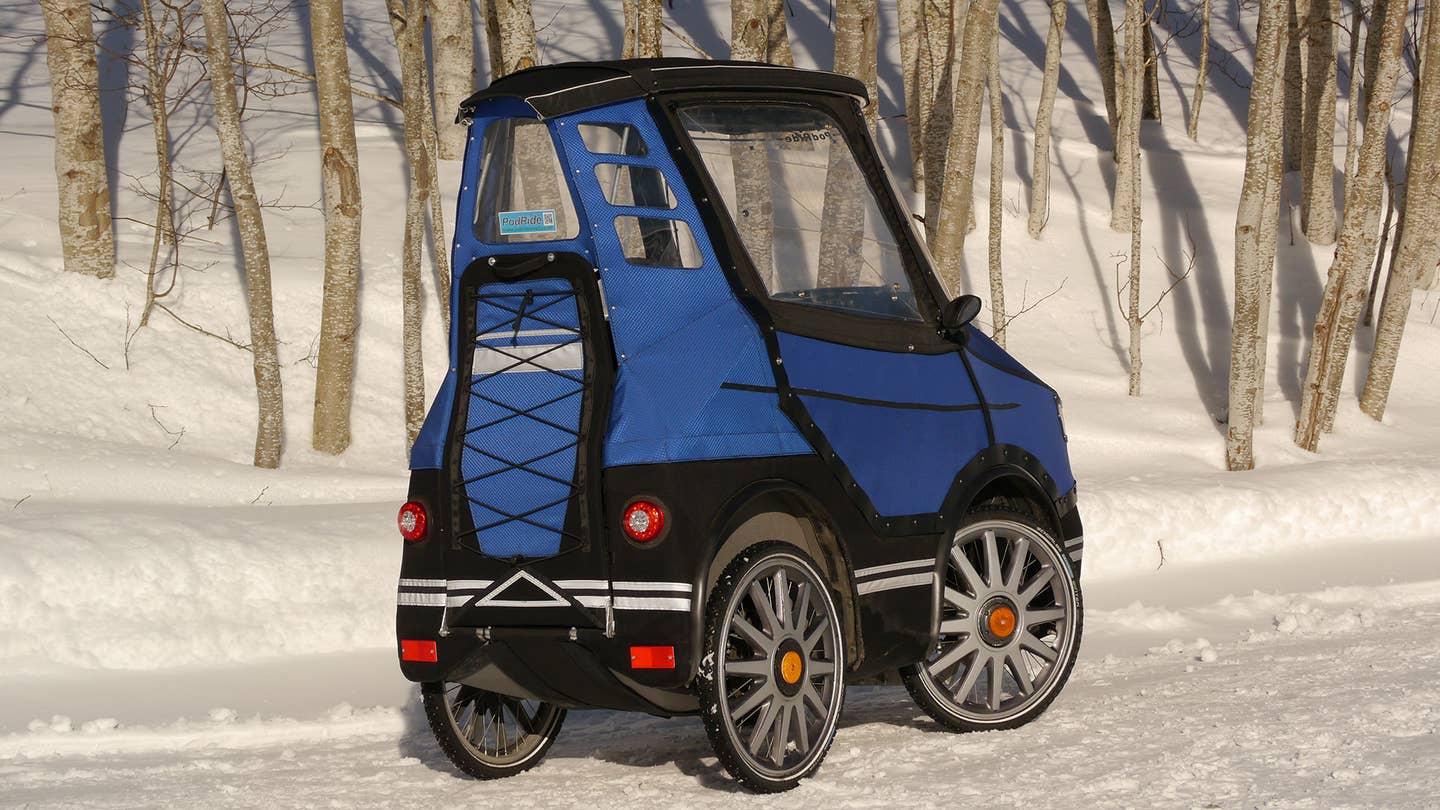 A velomobile is low-slung contraption that mixes the practicality of a bicycle with the comforts of a car – essentially a recumbent bicycle with a full-body covering and perhaps an electric motor for a little extra shove. Around for more than a century, they come in a profusion of styles comparable to the automotive world: the evovelo is the Prius C, the Katanga is the Ferrari 488, the Velove Armadillo is the box truck. Now, Swedish designer Mikael Kjellman has an electrified entry he’s trying to get funded on Indiegogo. Called the Podride, this is the Volvo V60 compact crossover of velomobiles, with tons of features, a hatchback and cargo area, an air suspension, and all-weather capability.

The aluminum tube frame is covered in waterproof fabric. The rider enters by swinging the front section forward and plopping into the padded seat that’s about the same height as the seat in a small car, making it easier to see and be seen. Yes, the PodRide looks like something from the storyboard for a children’s book, but it dangles its bait at adults.

That waterproof shell envelops a removable windshield with a defogger, a hand-cranked windshield wiper, a cargo area behind the seat with space for groceries and pockets and loops for tools, LED headlights and taillights with turn signals, and a tow hitch for a bike trailer. The swingarm front and rear suspensions get Rock Shocks shock absorbers for a smoother ride. All of this in a package 30 inches wide means it’s narrow enough for a bike path, and it’s probably the only bicycle there that’s got 20-inch rims.

Loading up on extras does shoot the Podride's weight up to 154 pounds, but the 250-watt electric motor makes all those pounds moot. Configured as a standard e-bike system, top speed is 15.5 miles per hour, the lithium-ion battery is good for 37 miles of range. With 18 gears when the driver pedals and 14 gears in the internal hub transmission, the PodRide can get up steep hills on its own power, and four wheels plus independent drum brakes means it can do something many other velomobiles can’t: drift.

Kjellman says he’s driven the PodRide to work every day for a year, including through all those months of Swedish winter. His Indiegogo campaign targets $30,000 to produce the primary components like wheels and driveshafts. If he reaches $50,000 he’ll develop a DIY kit so home builders can fabricate their own PodRides, at $100,000 he’ll put together a some-assembly-required PodRide that doesn’t need any fabrication. At the time of writing he’s only got $243, but Kjellman wants everyone to know that if you give $5 the coral reefs will thank you, $10 gets a shoutout from the polar bears.

The Twofer: Buy This Tiny Tool and This Cartoon Car

They’re like two tiny peas in a diminutive, sugar-coated pod.