Why the Renault Wind’s Roof Trumps the Miata RF

Mazda’s folding targa is smart, but it doesn’t stack up to a French Barbie car. 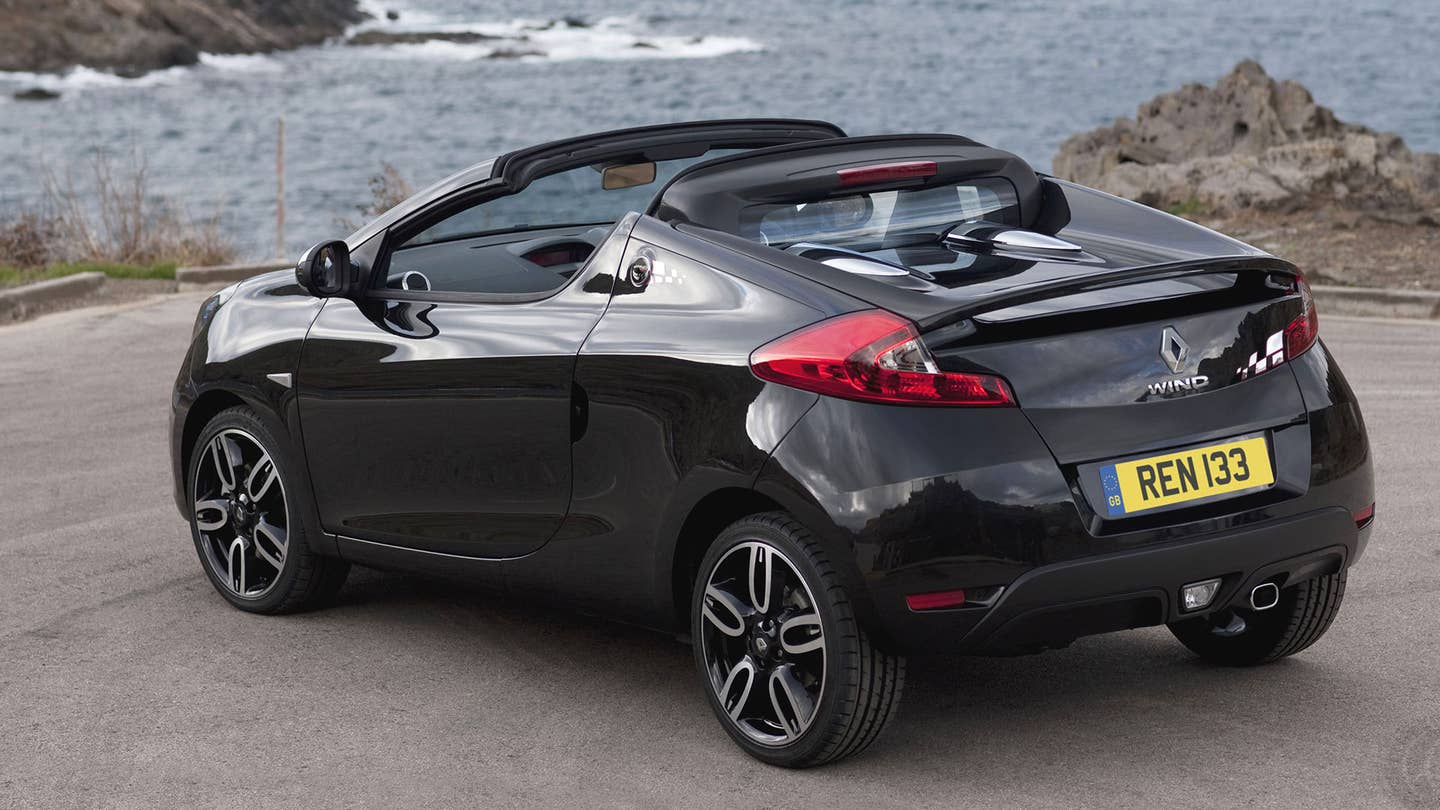 What’s left to say about the new MX-5 Miata? Mazda’s plucky little roadster is a triumph. It’s a triumph for drivers and lightweighting, for sunshine and manual gearboxes. Mark Twain said he wondered if the world was run by smart people pulling a stunt or idiots being sincere. If Mazda doesn’t sell every single fourth-gen Miata, we’ll know the latter is true.

The new MX-5 RF should help move inventory. This retractable hardtop version is a handsome thing, all flying buttresses and fastback swagger, a silhouette that’ll pull non-enthusiasts into dealerships. But the RF isn’t a convertible. Not really. It’s a folding targa, the roof panel slotting into the trunk like a jukebox stashes away records. The mechanism weighs roughly 110 pounds. And, functionally, it isn’t too far off the 911 Targa’s hypnotizing robotic clasp-and-tentacle movement. So the RF is being applauded for pulling that level of showmanship from the Porsche-osphere into any schmuck’s driveway.

Too bad a weird French roadster did it better six years ago.

Odds are you aren’t too familiar with the Renault Wind. It never sold in the U.S., and in Europe was produced sparingly between 2010 and 2012. By most accounts, the Wind is also a pretty forgettable drive. Tiny engine. Iffy suspension. Styling like the bastard daughter of a Hyundai Tiburon and Honda del Sol. But its roof mechanism was the cat’s pajamas.

The design came from Leonardo Fioravanti. He’s the man behind basically every worthwhile modern Ferrari. (See: Dino, Daytona, 288 GTO, F40. The list goes on.) One of his more interesting works is the Ferrari 575 Superamerica targa convertible. Because he’s damn clever, Fioravanti actually patented the Superamerica’s unique roof movement. When production ended, he sold it off to Renault.

There’s a simple latch, then a little electronic jig. A trap-door-style clamshell on top of the trunk lifts; the top pivots at the B-pillars and falls straight back, like a Rolodex card; the clamshell closes, sandwiching the roof panel. Fin.The whole dance takes 12 seconds. It also weighs less than 50 lbs. All this, in a car that cost less than the U.S. equivalent of $22k new, inflation adjusted.

The RF has a sexier stunt, sure, but the Renault’s sincere as they come. Simplicity is the ultimate in sophistication. The Miata is a triumph, well worth celebrating. Just don’t forget about the Fioravanti roof.