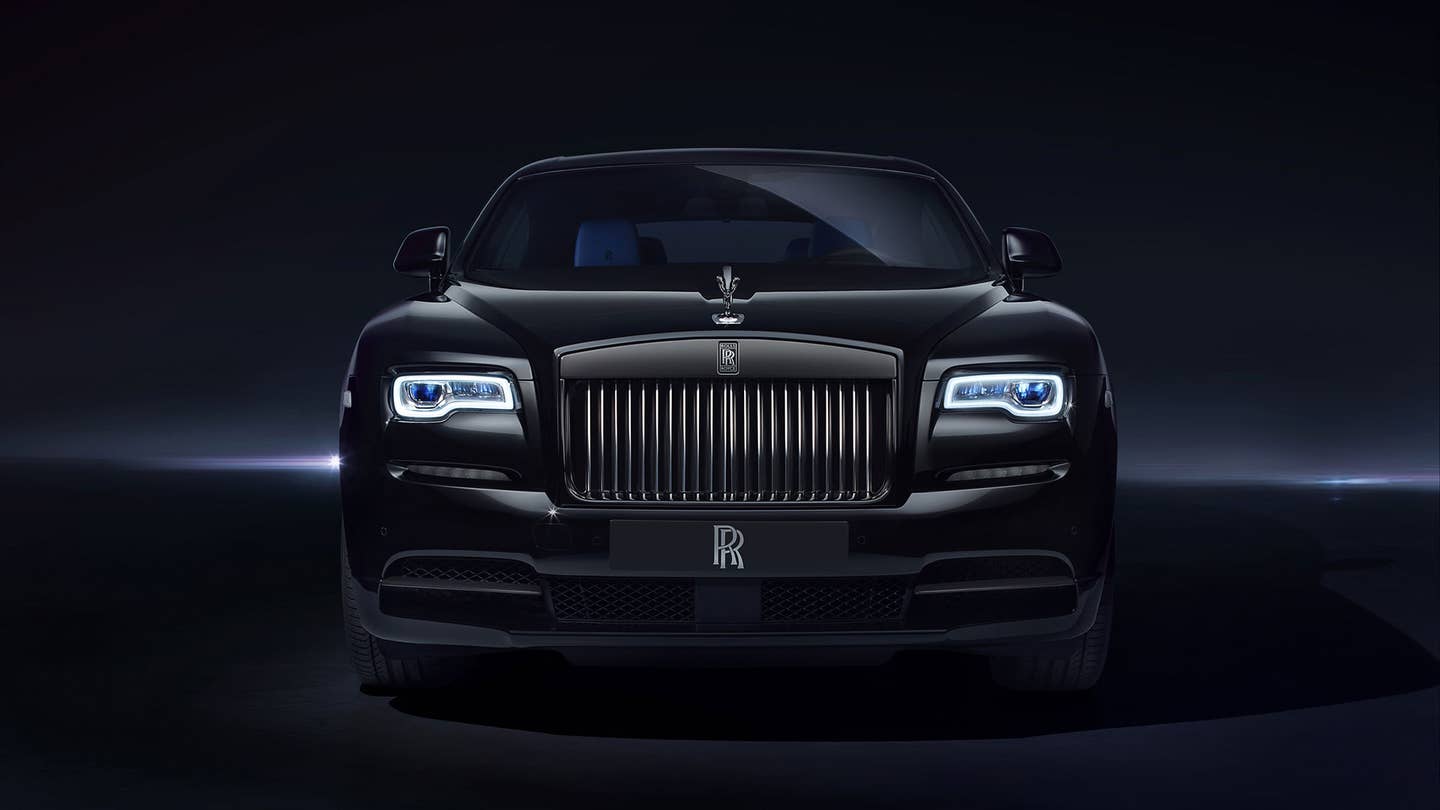 There’s a cynical take on The New York Times and its night-life coverage: If the Grey Lady is reporting on a dank, sexy haunt in Chinatown or a password-only bar hidden behind a West Village townhouse, odds are, the cool kids stopped going years ago. (That’s not Cara Delevigne sipping a Negroni in the corner—that’s just Cara the cosmetologist, from Jersey.) Now Rolls-Royce is imparting a similar kiss of death: The World's Finest Motor Car Company will, for the first time, offered “murdered out” models from the factory. That is, Rolls-Royce will be offering a Ghost or Wraith with black paint, black leather and black wheels, the world’s most luxurious and shapely coal lumps. A friend from RIDES Magazine noted that no one innovative in the customizing scene has “murdered out” a car—let alone used that term—in about a decade. Seems about right.

While Rolls-Royce clients have doubtlessly been taking out hits on big-mouthed mistresses and inheritance-obstructing great uncles for years, the brand is pushing its stylish, murdery-y agenda with renewed vigor. Hark, cometh the Black Badge, a noirish Spirit of Ecstasy that marks an explicit courtship of the young, reckless and wealthy. According to a statement from Torsten Müller-Ötvös, CEO of Rolls-Royce, the Black Badge car will “appeal to those people who are elusive and defiant, the risk takers and disruptors who break the rules.” It seems the Black Badge Rolls-Royce is for the kind of heavy-drinking success stories who run over a neighbor’s exchange student and settle out of court, or the kind of fellow who has to be told thrice to keep his nude self out of the fountain in the garden. (Note: Should I read an automaker's breathless copy about “disruptors” one more time, I will eagerly “disrupt” my brain stem from my basal ganglia.)

Beyond the rich and glossy coats of marketing lacquer, the Black Badge Barges for Baddies also boast a carbon-fiber console—a touch of lightness amid the heavy curtain of existential gloom. The 6.6-liter turbo V12 gets a 40-50 pound-foot bump in torque, depending on the model, and both get larger brakes and tighter suspension. Lastly, Rolls is outfitting the its ebony stallions with special wheels. Via the magic of Rolls-Royce arithmetic, the wheels are said to sport 22 layers of carbon fiber, yet “44 layers of strength.” There I was, thinking that the only thing requiring so many fortifying layers was my man Spanx.

Colors beyond the sub-brand’s signature Black Badge Black are available—Rolls-Royce would rather tip its heritage collection into the Irish Sea than deny a customer his wishes—though to specify your murdered-out Rolls in Sea Foam is to unmurder it, and then what are you left with? A reanimated corpse. Misanthropic playboys: Stick with black until something darker comes along.

In the manner of a 110-year-old company appealing to The Youth, Rolls-Royce ended the Black Badge press release with a social media cue. So, should you bear a trust fund and commit a crime under cover of darkness, please take to Twitter and organize your exploits accordingly: #blackbadge, the official hashtag of That was a frightfully large bump… More road gin?