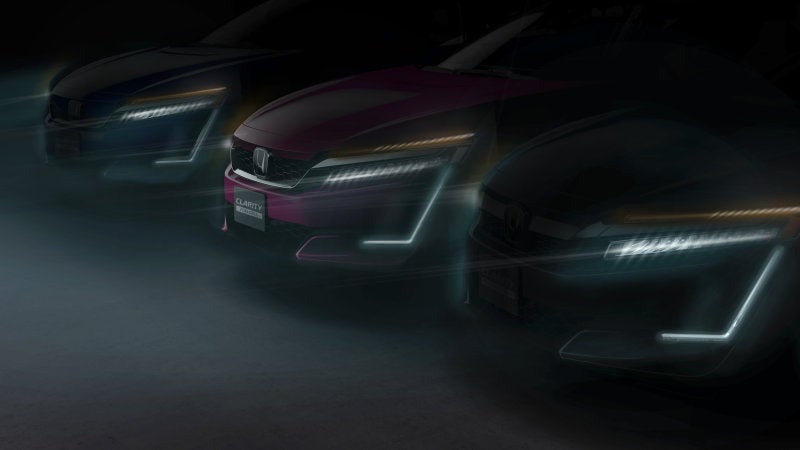 Honda is building its Clarity lineup to include three distinct models: the currently available fuel cell vehicle, a plug-in hybrid, and lastly, an all electric version. The first of those debuted last year, achieving a range of 366 miles on a single tank of hydrogen. The automaker hopes that the latter two will help develop the Clarity's global popularity, and it looks like they'll be revealed at the New York Auto Show later in the year.

The Clarity Electric may be the most puzzling of this group. Whereas EVs have mostly become the best choice for those going green (and willing to pay for it), the Honda pitches a different strategy to buyers. Instead of bothering with large range figures, this Honda can only go 80 miles on one electric fill up according to Automotive News. That's a recognizably small number, especially as mid-$30K EVs like the Chevrolet Bolt and Tesla Model 3 will travel nearly three times that on one charge.

The Plug-In Hybrid will be the volume push for the Clarity lineup. It's a safe bet that's been proven to work in a variety of markets, showing itself as a worthwhile venture for Honda. It will have an all-electric driving range of 40 miles, a moderate number for its class. The manufacturer claims it will be available in all 50 states, improving availability to increase sales.

Each of the new models will compliment the Clarity Fuel Cell in unique ways. On one hand, we see why Honda wouldn't want the Clarity Electric to surpass the hydrogen car in range -- after all, that'd be aiding the enemy. Secondly, the plug-in hybrid should ensure higher sales success for the automaker, enabling further development of fuel cell technology. The current Clarity Fuel Cell poses major improvements over the FCX Clarity it replaces with a powerplant that is 33 percent smaller and has a 60 percent increase in power density.