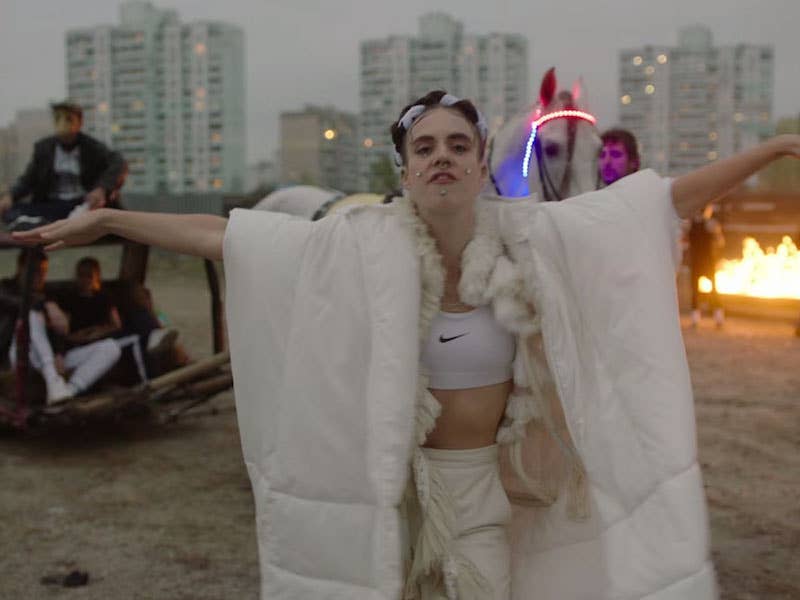 For the uninitiated, MØ is a Danish electropop star. Here name is both an acronym for her middle and last names, Marie Ørsted, and Danish slang for “virgin.” She has a Madonna-like tendency toward sexual provocation, a sound not unlike critical darling Grimes, Miley Cyrus’ athleisureware-enabled dance moves and a heap of Bjørk’s unalloyed, low-country weirdness. Suffice it to say, MØ is very cool.

Recently, she provided vocals for Major Lazer’s huge international dance hit “Lean On,” and has followed up that success with a major single release of her own, “Kamikaze.” The song is high-quality mid-tempo dance music about youthful indifference and the right to party; the video was shot in an abandoned lot in Kiev, Ukraine. There’s a little rascally tussling, a litany of headdresses, a gold-painted tire throne and a lot of Nike sportswear. Car stunts, undertaken in some trashed Russian-market economy, are less meticulous versions of the aerobatics M.I.A. used in “Bad Girls.”

A great beat, a Danish ingenue and Ukrainian dirt—a festival of edgy, post-Soviet chic. Play it at your Halloween bash and folks will think you’re cool. And maybe Danish.

Like waterskiing with cars, and the Alps instead of Lake Winnipesaukee.

Try to look away from this slow-motion disaster.