What’s Your Favorite Peter Dinklage On a Scooter Photoshop Scene?

Bless you, graphically-inclined denizens of the Internet. 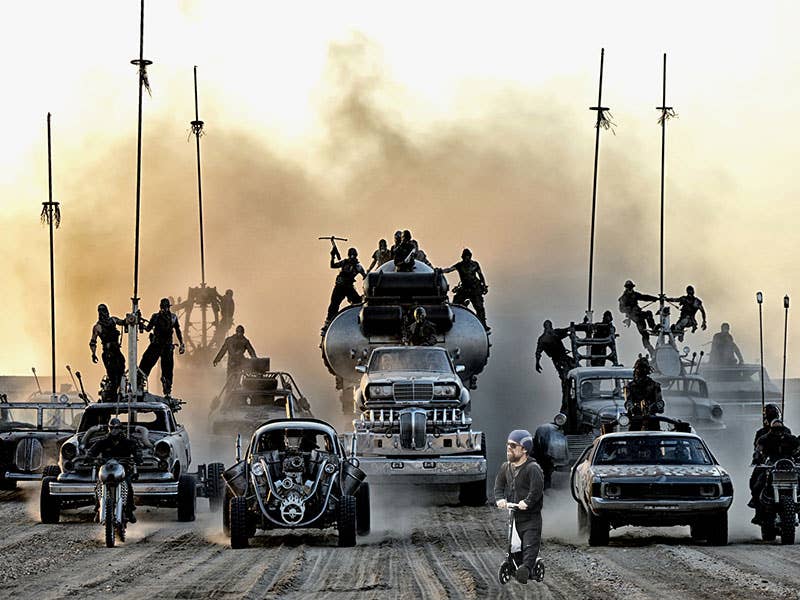 When Peter Dinklage bundled up and set out on the streets of New York City on a scooter, it's unlikely that he thought a fan snap of him whizzing around would blow up into a full-blown meme. But the wonderful, marvelous Internet Photoshoppers have taken the Game of Thrones actor's simple day around town and turned it into a glorious, glorious thing: The Peter Dinklage on a Scooter meme.

A challenge went out on Reddit last week calling for Tyrion Lannister, bedecked in his North Face, shades, and fingerless gloves, to be inserted into comical scenes. And bless the original poster for that. When the Internet bands together in the pursuit of hilarity, everyone wins. The top-voted image to hit Imgur features Dinklage alongside a motorcycle gang, entitled “Born to Be Wild.” There’s also one where Dinklage is in E.T.,just behind Elliott on his bicycle. Someone else put the alien in a basket on Dinklage’s actual scooter. OneGame of Thrones fan inserted the actor into his own show, alongside an army charging into battle, from this season's penultimate episode.

Our favorite ‘shop job is a hard-fought tie between two incredible scenes. The first is Dinklage leading the pack of marauding vehicles from Mad Max, because the submitter took great care to include dust coming from underneath his wheels. The second is where he joins the nonplussed gang of Spongebob Squarepants and Patrick Star as they amble across the bottom of the ocean. While these are all great, what we’d really love to do is start a scooter gang with Dinklage, for real. If anyone knows how to make that happen, and/or wants to ride with us, drop us a line.