Annual Rodeo Drive Concours happens on Sunday for a reason. 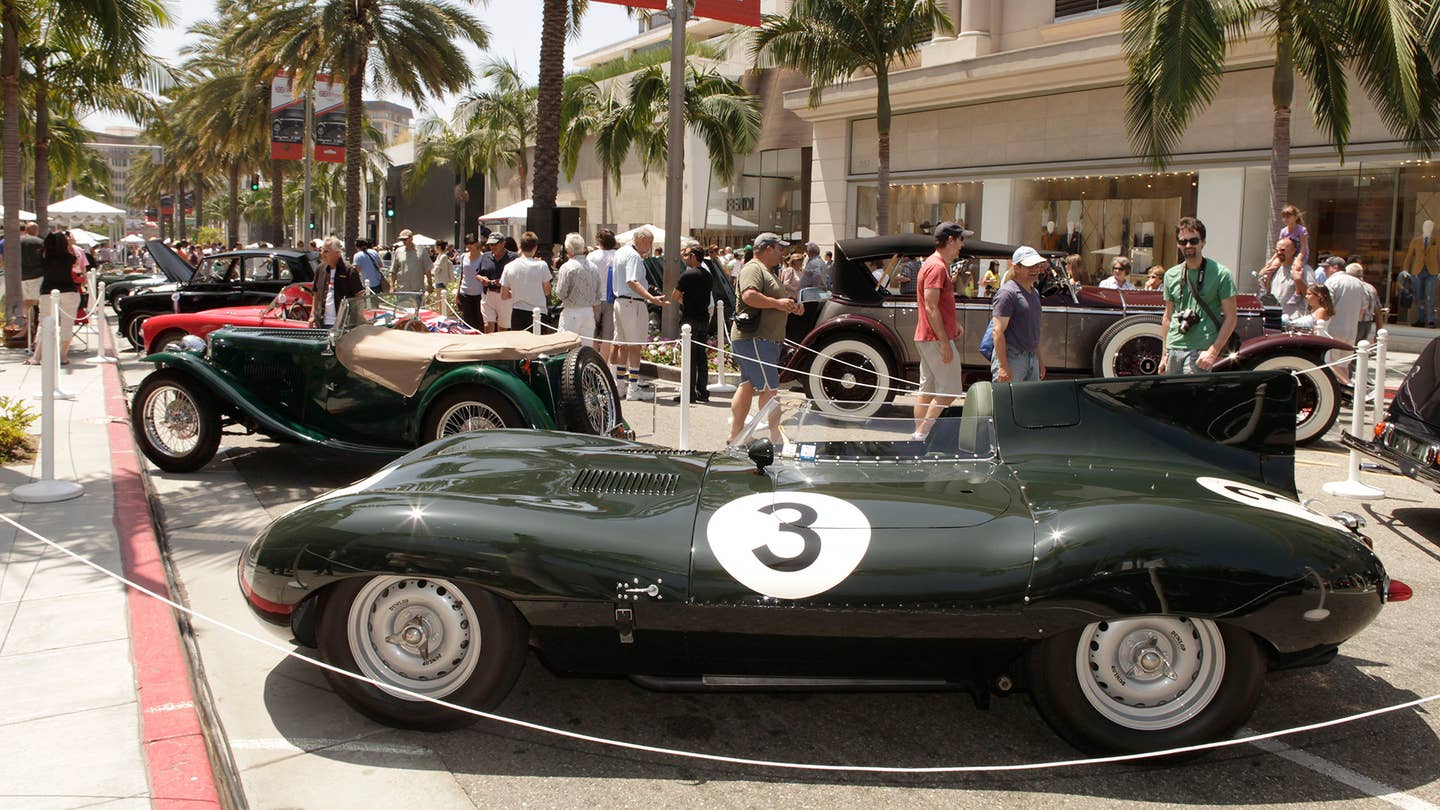 If you’re one of the 30,000 people who will attend the 23rd annual Rodeo Drive Concours d’Elegance in Beverly Hills this Sunday, you will witness, as you walk along one of the world's most expensive retail addresses, a display of some of the world’s most amazing supercars: a 1956 Jaguar XKSS, a 1959 Ferrari 250GT LWB California, a 1967 Shelby Cobra 427, a 1968 Lamborghini Miura, a 1992 Bugatti EB110. You will also walk within yards of the entrance Bruce Meyer’s private garage. But you will not be invited in.

Meyer is both a property owner and a merchant on Rodeo Drive—his family has run the Geary’s fine housewares and horology shops for three generations. He is one of the founders of the local Concours, and still acts as its Committee Chairman. The office of his real estate development company, Meyer Pacific, is in town. And he lives in Beverly Hills, in a large house with a large garage. But the crème de la crème of his personal collection is housed in a top secret, unmarked location near Bijan, BCBG, and Burberry.

“The concours goes for a whole day, and then often afterward, I’ll do an open house in my garage,” Meyer tells me during a phone call. “For just a few personal friends.”

Meyer keeps the location undisclosed for good reason: the place would otherwise be mobbed with car nerds trying to scratch through the walls for a mere glimpse. Bruce has one of the finest private vehicle collections in the world. There is of course a 300 SL Gullwing. Of course there’s a Duesenberg Model J. And a perfect Porsche 356 Speedster. But then there’s the Porsche 935 K3 that won Le Mans in 1979. There’s a 1960 Chevrolet Corvette that was raced at Le Mans by Briggs Cunningham. There’s a 1961 Ferrari 250GT SWB that won its class at Le Mans. And there’s a 1957 Ferrari 250 TRC Testa Rossa. The last time one like it changed hands, it sold for about $40 million.

I ask Bruce if he’s looking for anything else to, ahem, round out his collection. “No,” he says emphatically. “I’m seventy-five years old now. I’m not looking for any five-year restoration projects. Been there, done that. So, I’m very selective on what I add to my garage.”

Bruce’s collection is so discerning and valuable, its contents so delicate and precious, that when I visited I was scared to even look at some of the cars straight-on. But just because the general public is (understandably) not invited to pop by, it doesn’t mean Bruce isn’t generous with sharing his vehicles. Every year, he displays special cars from his collection at the Concours. “This year, the theme is Supercars, so we’re doing our Bugatti,” he says. “We have a 1936 Bugatti Type 57,” he says. Of course we do.

Bruce also pulls in favors from some of the other top-notch collectors he knows, getting them to bring their cars out for a free, non-judged event—in essence, the most glorious Cars and Coffee parking lot ever. “We’ve had the best of the best bring their cars,” he says. “You know, it’s really a relationship-based hobby at the end of the day, and I call on all of my friends to bring their spectacular cars. The big names like Peter Mullin, the Nethercutts, Chip Connor, David Gooding, they’ve all brought cars.”

I love collectors who aren’t afraid to drive their cars, and who aren’t afraid to show their cars, especially outside of the exclusive (and pricey, and crowded) Concours I’m privileged enough to attend. So, naturally, I revere Bruce. But I can’t help but wonder why he goes to the trouble of chairing this messy event (even if, as he tells me, the local merchants love it and it brings in all sorts of new consumers and provides a big business boost)?

“It’s on Father’s Day,” he says. “It’s a no-excuses day for dad. He can just say, 'let’s go to the car show,' and he doesn’t have to provide any explanation, because it’s his day.”