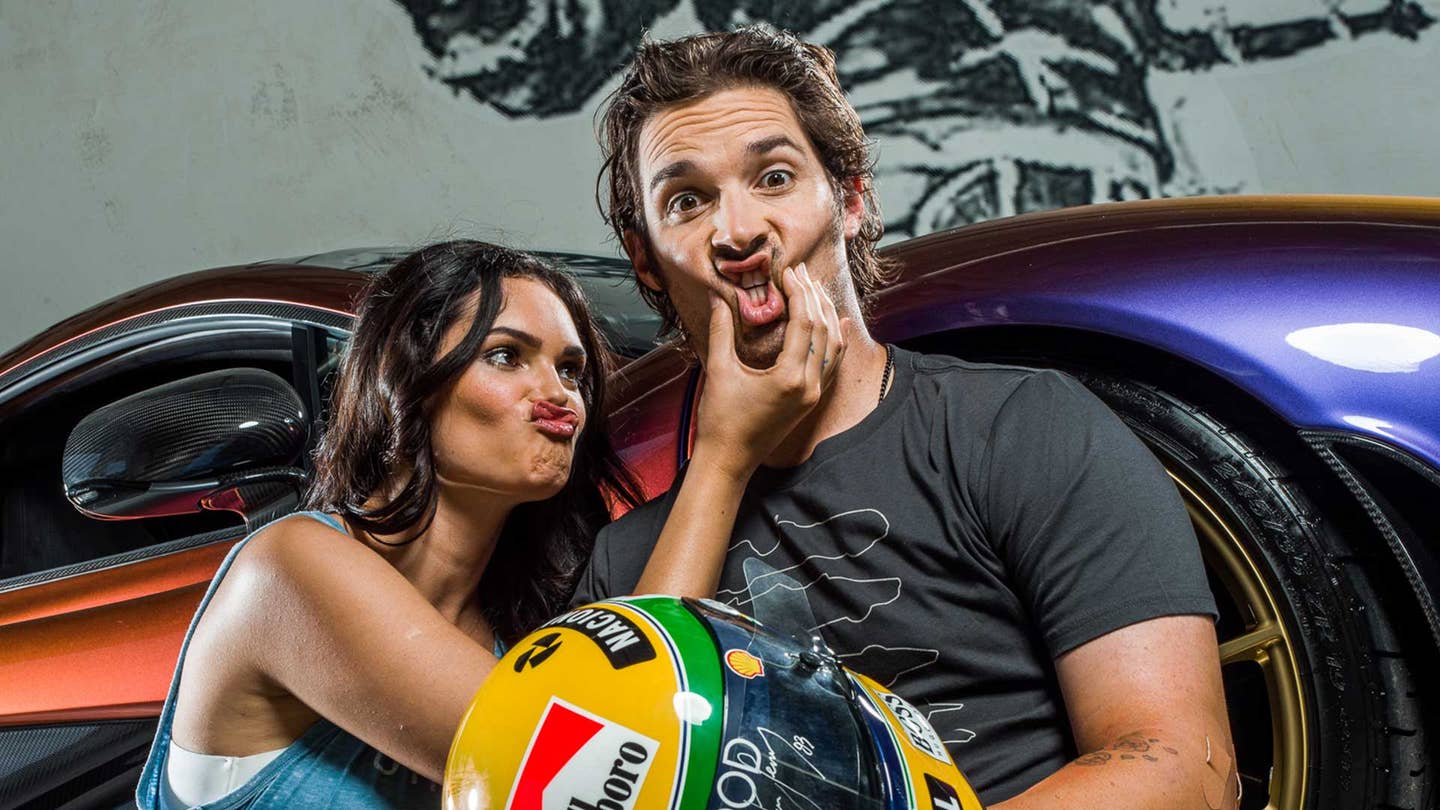 On May 1, 1994, C.J. Wilson, age 13, sat in his home in Orange County, California, watching his hero Ayrton Senna on TV. The Brazilian was cruising at the front of the pack in the early laps of the San Marino Grand Prix. “He was my favorite driver,” C.J. recalls. “I remember seeing an interview with him when I was a kid, and I was just entranced.”

Senna, already a Formula 1 idol with a reputation as a driver with a deathwish, stretched his lead in lap 7. Then, suddenly, he crashed into a wall at extremely high speed. The TV showed a frenzy of activity, a medical crew rushing to the scene, and Senna sitting strangely limp in his car.

“It was totally unexpected,” C.J. says. “You’re watching your hero go around a corner and something goes wrong.” One of the greatest racing drivers of all time perished in that crash. “I was really young and impressionable. I couldn’t watch racing for years after that.”

Thousands of miles away, on that same day in 1994—in Goiania, Brazil—Lisalla Montenegro was in her home and her father was in front of the television. “I was six when the tragedy happened,” she says. “I remember my dad in front of the TV and he was just devastated. For a week, all of Brazil just stopped. I remember my dad telling me: Our hero has died.”

You can watch on-board videos of Senna and see that he’s attempting things that no one else would even conceive of.

Launch forward a couple decades, and C.J. and Liz (for short) are in their garage in Costa Mesa, California, which today looks like a shrine to Senna. The Los Angeles Angels left-handed pitcher (career 94-70, 3.74 ERA) and his model wife (she emigrated to the States a few years back) have turned the space into a gearhead funhouse. Besides all the machinery (cars, motorcycles), there’s a mural of Mad Max characters on the wall, and an entire room filled with helmets and racing gear.

“We first bonded over our passion for racing and Senna,” Wilson says. That passion has rolled onto the street in all manner of hot machinery. Liz has a racing license and a motorcycle license. He owns a Porsche Carrera GT and a 911 GT3 RS, but truly lusts over McLaren, which is, not coincidentally, the same marque that Senna drove his three F1 World Championships.

Among the couple’s collection: a McLaren 650S Spider; a 1993 Acura NSX, a mid-engine sports car Senna helped develop (since he was racing for Honda-powered McLaren cars and, of course, Honda owns Acura); and the mother lode—a McLaren P1, one of the most sought-after supercars in the world. Only 375 P1s were built starting in 2013; Wilson and his wife have chassis number 127.

The color is Cerberus Pearl, which he chose because it’s the color of a Pacific sunset. (“I’ll never get bored of the color,” C.J. says, not sounding much like an All-Star MLB pitcher. “It has multiple personalities.”) The P1 came with a helmet in matching color, a racing suit and gloves, matching luggage that fits perfectly in the frunk (being the small trunk space in the front, of course), and a color-correct miniature of the car that’s the size of a shoebox.

Some owners are too scared to drive their seven figure cars. The day Wilson took delivery of his P1, he was in Dallas. He picked up his wife at the airport and drove straight to the Grand Canyon with her and no luggage.

“It’s all my dad’s fault,” says Wilson, whose father worked on a pit crew for a dirt track team back in the day. “He took us to races on weekends and I thought the ultimate thing that a human could do was to be a good racecar driver.”

As a kid, the future major leaguer was “fascinated by the shape” of the 1980s-era supercars like the Countach and the Testarossa. Baseball was his third choice of career, behind fighter pilot and racecar driver. He decided the first two were unrealistic, so he went with his fallback: major league stardom. It’s not an easy way of life, requiring months on the road and plenty of Pepto-Bismol on pitching days. And so, when he has time off—like now, when he’s recovering from season-ending elbow surgery—he unwinds with his wife and their loud engines.

While Wilson’s baseball contract forbids him from racing or riding motorcycles during the season, he owns CJ Wilson Racing, which currently lies in second place in the Continental Tire SportsCar Challenge ST class, with two wins on the season. Two years ago, the team won the MX-5 Cup.

His passion for Senna keeps growing. “The older I’ve gotten and the more I’ve learned, the more of a fan I’ve become,” Wilson says. “You start to read more of the philosophy of these great people. It could be Bruce Lee or Ayrton Senna, these guys have a spiritual connectedness to what they’re doing. They’re good because they started at a young age, they went through hardship, and that helped them blossom. The competition brought greatness out of them. It wasn’t just a gift. They weren’t just better than everyone else. They became better than everyone else. That becoming, I identify with, because it was a choice.”

“You can watch on-board videos of Senna and see that he’s attempting things that no one else would even conceive of. There’s a fear factor that holds you back from achieving your highest level. He’d get to his limit, then he’d find a new limit. He put his life on the line in every corner during qualifying.”

Not that Wilson has a death wish. At 34, he is the age now that Senna was when he died. “I want to live until I’m 120,” he says. “But I also want to go cliff jumping, shark diving, and car racing.” Sounds like a plan.