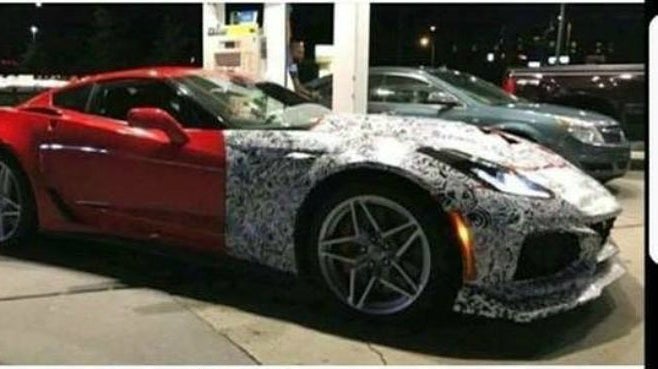 Since the C4 Corvette brought the ZR-1 badge into the world, every generation of Corvette has earned its own high performance trim (or two). The C5 used the Z06 badge from the days of the C2-gen Stingray, the C6 received both Z06 and ZR1 versions, and the current C7 has the Z06 trim available for those seeking a high performance option. Unfortunately,  early C7 Z06s were plagued with heat soak problems—and despite improvements being made by GM, the C7 Z06's reputation remains tainted among some hardline Corvette fans.

An answer may be on the horizon, though, in the form of this suspiciously camouflaged C7 spotted parked at a gas station. This, presumably, is the new extra-spicy Corvette widely considered to be a new ZR1.

The swirly black and white camouflage we've become accustomed to seeing on prototypes adorns the front and rear bumpers, the front fenders, the hood, and a tremendous wing perched atop the trunk. The roof, rear fenders, and doors seem to be shared with other 'Vettes, hence their lack of camouflage. However, the wheel design is not offered on the 2018 Stingray, Grand Sport, or Z06, according to Chevrolet's online configurator. The rear bumper appears to have little setting it apart from the Z06, and the rear wing resembles (to a degree) the one found on the Camaro ZL1 1LE.

Around front, the ZR1 prototype forgoes the Stingray and Z06's single air inlet, adding two more swollen intakes—possibly as a preventative for the aforementioned heat soak issues. The hood itself appears taller than that of the Z06, and has a deeper crease that continues forward into the front bumper. Given that the Z06 is already supercharged, this makes us wonder if the rumors of a DOHC engine for the C7 ZR1 have some truth to them— we already have reason to believe that the new ZR1 will be supercharged.

As for when the C7 ZR1 will be formally announced, hopefully it will be within the next year—as the C4 ZR-1 debuted when the car was three years old, and the C5 Z06 at the four-year mark. The C7 turned four this year. We're waiting, GM.