The cars are too damn easy to drive, and he'll never win again. 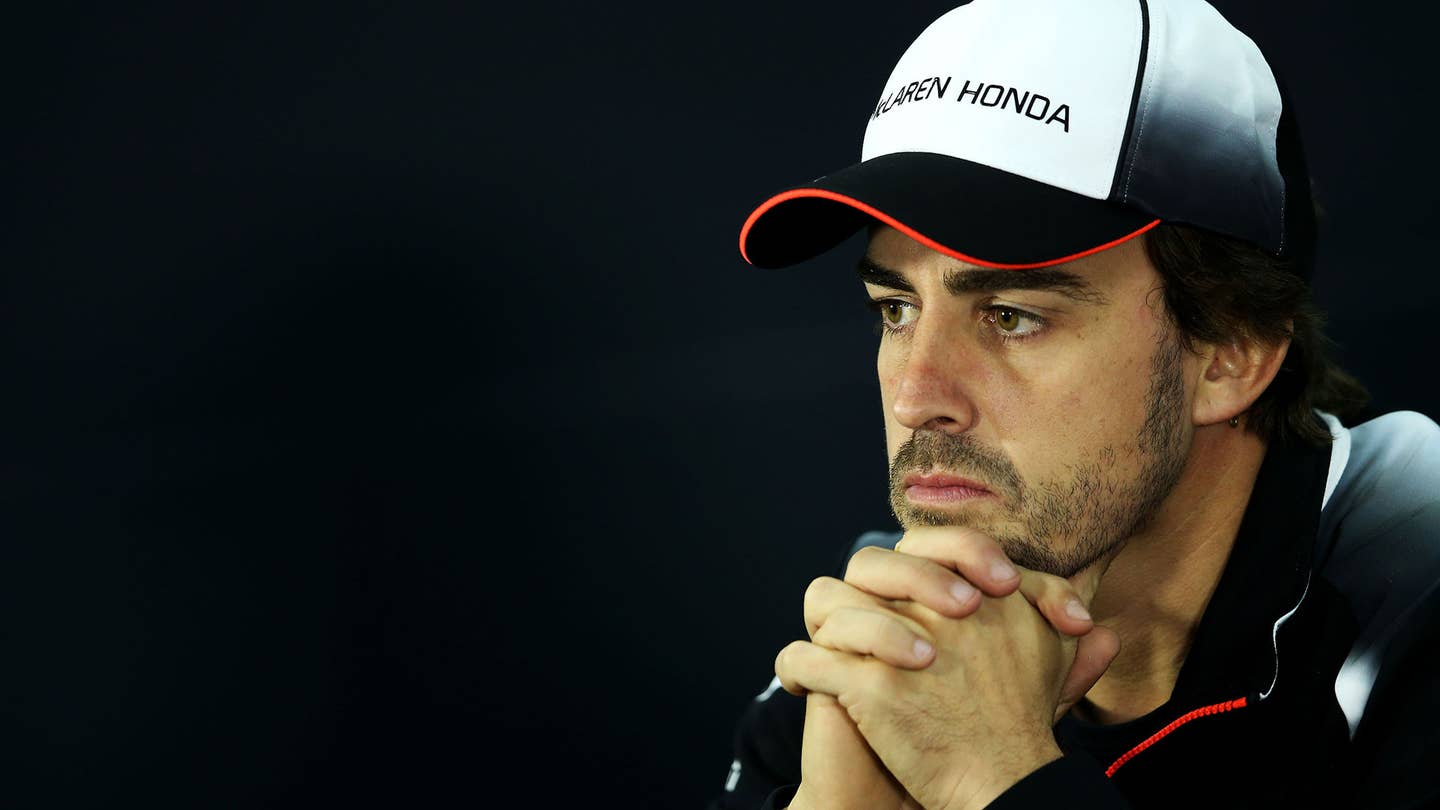 Why do people love motorsports? In part, because of this: It's fast, loud, and dramatic; it's sexy, fraught with tension and just a hint of primal bloodlust—an instinctual remnant from the gory old days of injury and righteous death. As such, viewers of F1 racing today struggle to wring a few moments of actual spectacle from a what has turned into a predictable parade.

Just imagine how veteran drivers feel. For instance, Fernando Alonso, the brilliant Spaniard who won back-to-back Championships with Renault in 2005 and '06. For Alonso, racing is no longer about winning, because he'll never win another race. In fact, driving a vastly outgunned McLaren Honda, the only way Alonso could possibly win a race is if God Himself reaches down from Heaven and vaporizes the dozen or more cars that casually outpace him every week.

All he's left with is a lucrative contract—tick tock, tick tock—and, presumably, the pure joy of racing in the most elite series on Planet Earth. Except, not really that, even.

In an interview published this morning on the Italian racing site, Autosprint, Alonso takes issue with Bernie Ecclestone's management of F1, the tires, and the current formula—the turbocharged hybrid V6 engines and the aerodynamics package.

"I'm not at all happy for some things that are happening: we can never drive the cars to their real limit; we can never attack as much as we would like because the tires don't allow you to. To be quick in today's F1, you must not attack too much . . . but that's something against a driver's instincts. This is why current cars aren't as pleasing to drive compared to other periods, when the technical rule book was different. This situation doesn't make me too happy.

"I am not saying current cars are easier to drive, but they certainly are from a physical point of view or in finding the car's true limit. That's because before, when you were attacking a turn, the speed mid-turn was so high that you really had to trust your car, trust that it would handle it. With less grip, it's easier to find the grip's limit.

"Before, after 10 laps you had to have a two-hour massage, while now you can drive 150 laps and barely sweat by the end."

Mark Webber spent 1 1 years in F1, ending with a seven-year run as Red Bull's number two driver before exiting to the anchor one of Porsche's World Endurance Championship campaigns. In short order, he tripled his vacation time and won a WEC Championship in one of the coolest racing prototypes ever built.

Not a bad retirement plan, Fernando. Throw in a massage or two and your future looks pretty good.