Why Monster AMA Supercross Is Everything You Want in a Motorsport 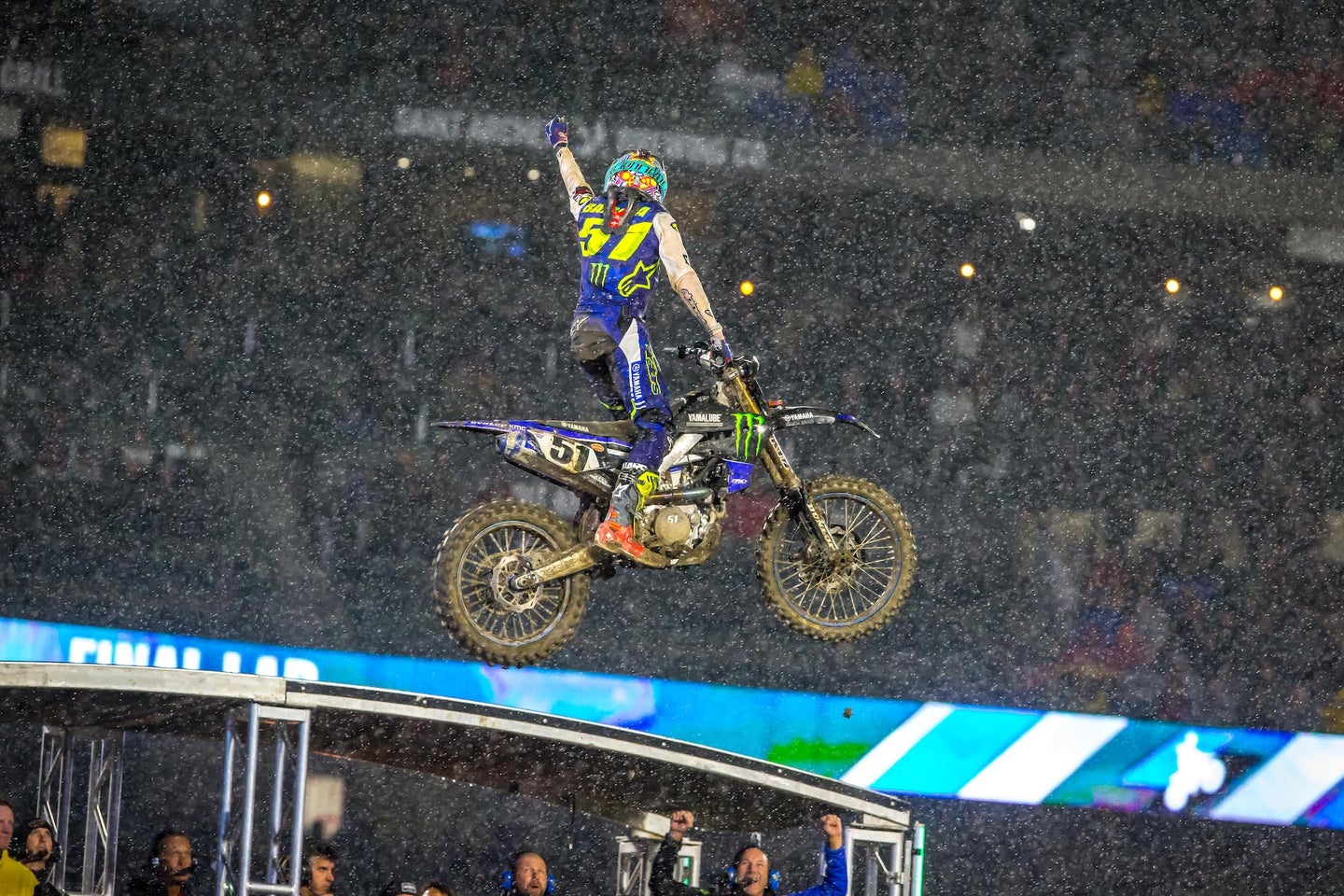 It's not often a story about motocross starts with a snippet of a Roman poet from the reign of Caesar Augustus, but here goes:

As borne through the air and seem to touch the sky:

No stop no stay; but clouds and sand arise,

Spurned and cast backwards on the viewers eyes…

Roughly 2,050 years ago, in Book III of his Georgics, the Virgil turned his hexametric verse upon the chariot races at the Circus Maximus. That fantastically frantic and fatal sport of slaves and tapestries would catch Ovid’s meter, too, and become one half of Juvenal’s panem et circenses—bread and circuses—used by emperors to get Romans to ignore the doomed wheezing of their tubercular empire.

And every line of the excerpted Virgil stands as true for Monster Energy AMA Supercross today as it did for the equine melee in 45 B.C.

If someone had told me at the turn of the New Year that I’d open a story on dirt bike racing by quoting two pillars of Roman civilization, I’d have choked on my latte and chaussons aux pommes.

Then I went to Anaheim 1. Monster Energy Yamaha Factory Racing team manager Jim Perry tells me, “Anaheim 1 is the Daytona, Indy, Super Bowl of the season.”

Athletes have been at Anaheim Stadium since early morning even though the 450-cc qualifying heats didn’t start until 7:35 p.m. Riders prep, tune, walk the track, practice, stretch, pray with the chaplain, wait. I walk the stadium’s concrete bowels among them. Young men are clad in shielded helmets and full-body armor, assisted by helpmeets and officials, the mid-tone 250-cc and bass 450-cc four-stroke exhausts bouncing a mess of Doppler deflections off the walls.

A rectangular composition in dirt awaits them in the arena. It has taken 60 hours and 30 pieces of heavy equipment for Dirt Wurx, the contracted track-builder, to lay 6,800 sheets of plywood base upon which 26 million pounds of dirt would be modeled into dozens of peaks and corrugations over a 1,200-foot-long circuit.

Dirt Wurx had done its work in the dry. Rains throughout race day turn the earth into mousse. The track looks more fit for a passel of hogs than for motorcycles. NBC Sports commentator and ex-supercrosser Ricky Carmichael, often called the sport’s Greatest of All Time, says, “It’s not normal to have mud in an A1. One of those things you’re on the line and your expectations get pushed aside.”

I have no expectations. I’ve never watched supercross, finding the buzzing and hopping as hectic and incomprehensible as watching fleas in a bucket, each flea given a Pantone-colored vest stamped with a sponsor like Thor or Kawasaki or Moose Racing Apparel.

That was before I understood what I was watching. My hosts correct that, initiating me into the personalities like Chad Reed, the old man of the sport at 37; Eli Tomac, the offspring of mountain biking legend John Tomac and a ruthless, laconic, victory-or-crash machine; and Ken Roczen, a German native so committed to fitting in that he sounds more like he’s from Michigan than Mattstedt. Roczen was this year’s official feel-good story, coming off two years of horrific injuries that lead him to say, “Pain is my new normal.”

I learn the vocabulary of supercross, describing the man-made obstacles riders fly over: double, double-double, triple, quad, tabletop, over-under bridge, rhythm section, step-off, whoops, dragon’s back. Rolling over a three-foot-high hillock is a single. Jumping from one to the next is a double, and so on. A rider can get 35 feet high and travel more than 80 feet through the air on a triple. In a 60-second lap, a rider might need to clear four dozen peaks, from a ten-deep line of three-foot-tall whoops to a six-foot tabletop to a ten-foot over-under bridge.

The madness of supercross is that riders do this over a race distance of 22 minutes plus one lap, on 70-horsepower, 450-cc bikes that weigh 230 pounds. Single-seaters, drag racers, and LMP1 Le Mans cars exceed that power-to-weight ratio, but the Ford GT and Lamborghini Huracán Evo LM GTE racers are a couple hundred horsepower short. Translate those numbers to a supercar, a 710-hp McLaren 720S would need 250 more horses to measure up, the 1,480-hp Bugatti Chiron is like-for-like. This is like wrestling a rocketship through Chutes and Ladders.

Such high-speed brutality demands science. The illusion of supercross is that science looks like flamboyant tricks. Take the “Bubba Scrub,” a technique much older than the man credited with perfecting the skill, James “Bubba” Stewart, often referred to as “The Fastest Man on Two Wheels.” Time in the air means lost speed because motorcycle horsepower and tires don’t work on air. As a rider approaches the lip of a jump, he kicks out the back of the bike just before going airborne to scrub speed and height. Extreme scrubbers lay their bikes horizontal and fly sideways, righting the bikes just before landing.

By leaning and sliding off the face of the jump, the rider flies lower and lands sooner. In an episode of Science of Supercross, racer Josh Grant spent 2.05 seconds doing a triple when he didn’t scrub, getting 21 feet high while traveling 87.5 feet. When he scrubbed, he got just 15.4 feet high and traveled 79.3 feet, touching ground again in 1.75 seconds. In any motorsport, three-tenths of a second in a single part of the course is ginormous.

During the day’s instruction, I’d also glean that supercross is never not dangerous. The season proved the sport is a bone-crushing ballet. Bubba’s brother Malcolm Stewart broke his femur when he flubbed the whoop section at the second race of the season. Defending series champion Jason Anderson broke his arm in two places while out training before the fourth race. Justin Hill injured his shoulder in practice in Oakland, then hit a hole in the whoops during qualifying the next week in San Diego, injuring cartilage in his ribs and forcing him to sit out the race. Chad Reed wiped out in Seattle, Kyle Chisholm landed on him, leaving Reed with a broken scapula, eight broken ribs, and a collapsed lung.

Intimacy with Russian Roulette makes men glib about taking bullets. David Vuillemin, an ex-rider who won the Championship 17 years ago and who’s now a trainer, says, “Oh yeah, I’ve broken my back several times.” Vuillemin had also said of the riders, “These are the KDs and Currys of dirtbike racing.” Imagine if every week someone on the Sacramento Warriors roster splintered one of his bones into two bones. But hey, the riders love their jobs. Likely as much as they love the chaplain.

Once I have the language of supercross translated, I'm sucked in. Anaheim rocks, because supercross has everything I want in a motorsport.

Supercross has close racing, riders frequently lose the lead on the last lap (or, at the Arlington, TX, race, lose by 0.023 seconds). There’s revenge, such as when Tyler Bowers plowed into Justin Barcia in a qualifying heat, presumed payback for Barcia breaking Bowers’ leg in last year’s Las Vegas finale. There’s contrition, as when defending champion Jason Anderson knocked Roczen over in Glendale and stayed bashful on the podium. There’s expert commentary on NBC Sports thanks to 14-year veteran announcer Ralph Sheheen, GOAT Carmichael, and ex-racer Daniel Blair. There’s variety, with more than three dozen riders making the main event this season, and more than eight championship lead changes. There are call-ups and kindnesses; Dean Wilson started the first five rounds of the season as a privateer before Rockstar Energy Husqvarna called. Yet Wilson still contributes to former “Privateer Island” mates by gifting a random one of them a $150 gas card every week. There’s lingo, like when RacerX wrote that Cooper Webb’s triple jump in the Arlington race was “putting your balls on the handlebars.”

The organizers appear sincere. When the San Diego event turned Biblically wet, organizers shortened the race by five minutes and spread lime to help dry the track. Something was off in the recipe, though, riders suffering rashes and chemical burns. Kenneth Feld, the owner of Feld Entertainment, apologized, offered cash reimbursement to riders, and promised better dialogue. Let me know when Liberty Media or Dorna does the same (and I’m a long-time F1 and MotoGP fan).

And there’s surprise. Instead of Roczen, Cooper Webb is this year’s feel-good story. Webb graduated to the premier class after back-to-back 250-cc championships in 2015 and 2016, but his mastery didn’t make the leap. Webb finished ninth in the 450-cc standings last year, his best finish. KTM took a chance on him for 2019, at a discount. No one mentioned his name in Anaheim, he wasn’t included in the media scrum. But Cooper “Clark Kent” Webb turned Superman, winning seven out of 16 races this year and on the cusp of the 450-cc championship.

This weekend’s race in Las Vegas concludes the season and decides the champion. Webb leads Tomac by 23 points, but there are 26 points on offer. You’ll find some of the best motorsports action on offer on USA Network at 10 p.m. EDT.

Even better, check out a race in person when the season kicks off next year, and take the complete Virgil verse with you to recite when the 30-seconds-to-go banner flies:

Hast thou beheld, when from the jail they start,

The youthful charioteers with beating heart

Rush to the race: and panting scarcely bear,

The extremes of feverish hopes and chilling fear;

Stoop to the reins and lash with all their force;

The flying chariot kindles in the course.

As borne through the air and seem to touch the sky:

No stop no stay; but clouds and sand arise,

Spurned and cast backwards on the viewers eyes:

The hindmost blows the foam upon the first:

Such is the love of praise and honorable thirst.