A Track Comparo Pits NASCAR Against IndyCar. Who Wins?

“You don’t want to see what happens if an inexperienced driver misses a shift in something like this.” 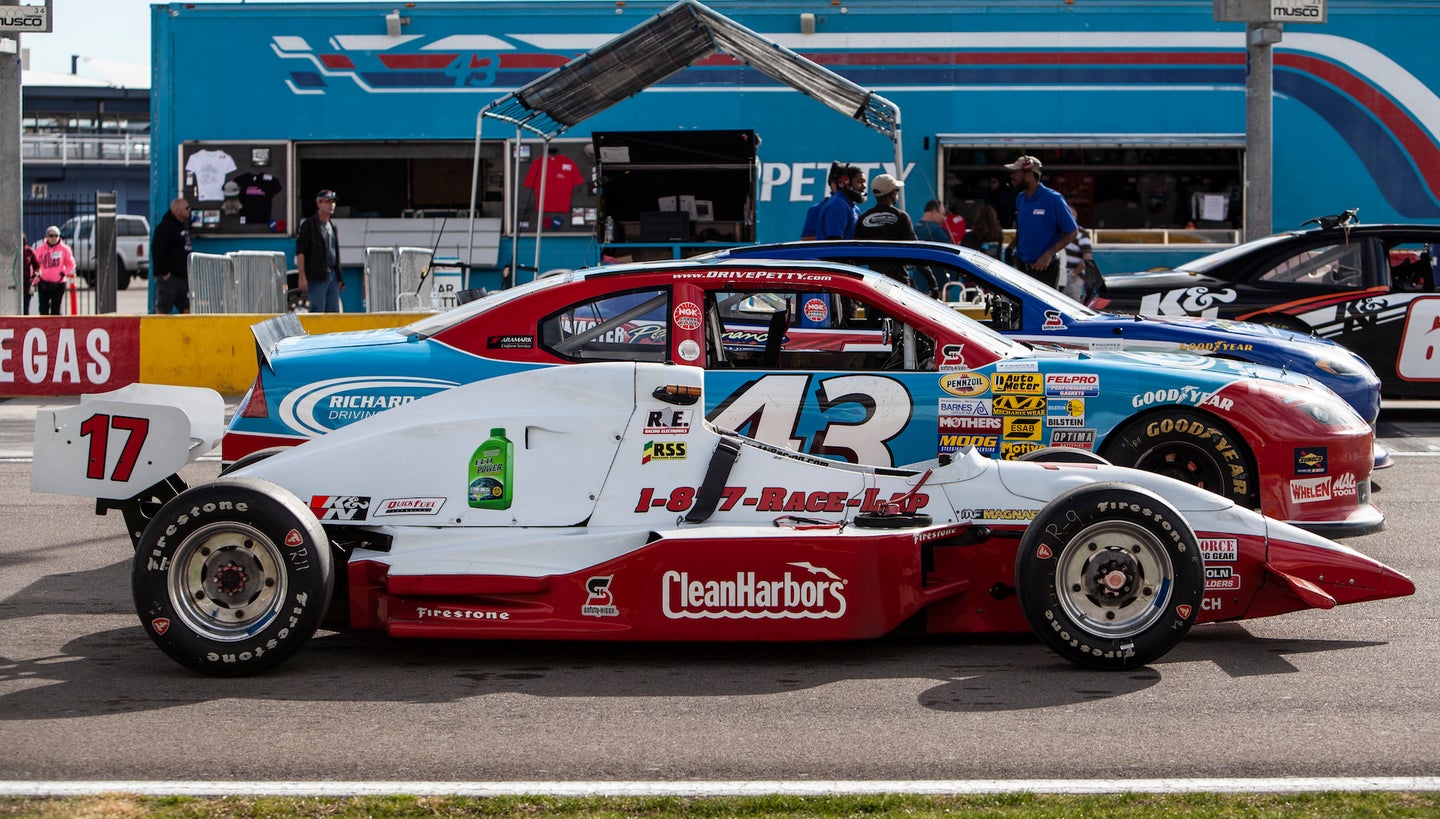 Becoming a racing driver is hard. It takes talent, dedication, patience, fearlessness, and an unfathomable amount of money spent over the course of many years. And if you haven’t planned out your entire career by your tenth birthday, the odds of you ever making it in the bigs approach nil. Of course, you could also inherit a tequila company, start a rubber floor mat company, a hedge fund, or a telecom, and pre-pay for your career. But for the rest of us, many moons late and many dollars short is the state of our careers in speedway racing.

The adage that “if you can’t do, teach,” doesn’t really apply to auto racing either, because in order to teach, you actually will have to be able to “do.” A more apt phrase is, “If you can’t do, attend an experience, preferably in Las Vegas.”  But, the question is, who has more fun? The NASCAR drivers or the Indycar Open Wheel folks?

For science—for you—I tested both.

The Richard Petty Driving Experience and Mario Andretti Racing Experience are fundamentally the same thing operated under different legends’ names from a home base at Las Vegas Motor Speedway, a 1.5-mile tri-oval ten miles from the strip. It’s a touring show as well, with stops at nearly every big oval NASCAR races at during the regular season, including Talladega, Charlotte, Auto Club, Atlanta, Chicagoland, and Texas Motor Speedway. But the bread and butter programs are here in Vegas, where tourists from all over the world come for a taste of Speedway glory.

It’s a remarkably efficient operation; the systems in place make everything smoother than any other driving experience I’ve been a part of, and absolutely zero experience is required or expected (in fact, as I learned later, for a program like this, experience is more of a drawback than anything else, as you have to resist the urge to do seemingly obvious things, such as shutting the car down on your own after a run).

No matter if you choose Petty or Andretti, the experience starts the same, with a 20-minute safety briefing in the classroom and a (nearly) idiot-proof method for getting around the oval without crashing. Instructor Joe Potocnic goes over the basic fire and safety systems of the car and explains where to place the car on the track during the lapping sessions: down the center of the straightaway, and five feet above the white line on the banked corners.

The stock cars are ex-XFinity series chassis modified for school use. They have 383-cubic inch small-block Chevy V8’s making 425 horsepower, four-speed Muncie-type gearboxes, and a solid rear axle with a Ford 9” rear end with a 3.50 final drive. They are remarkably simple, and, as Joe explains, pretty darn bulletproof, even when driven by randoms off the street. The brakes are… mostly there.

As you get strapped into your NASCAR, your helmet is fitted with a communication system to an instructor-slash-spotter in the tower above Start/Finish. My spotter, Victor Castro, was particularly enthusiastic and gave clear instructions for each 8-minute session. I had three sessions, and with each session the car’s rev limiter would be slightly raised: First 4500 RPM, then 5,000 RPM, then 5400 RPM.

The Petty team handles everything from starting the car to doing your belts and, as I learned, would prefer you just not do anything at all besides listen and drive. Every time I tried to help, I was asked, first nicely, then not so nicely, not to try to help.  Victor gave me clear instructions to upshift at 3,000 RPM and “just get the car into fourth by the time you exit pit road.”

Believe it or not, you don’t need any experience driving a manual transmission to drive one of these things – they have a method of bump starting you from fourth gear if you can’t drive a stick, and talking you through slowing the car down again without stalling. The idea that Tom Cruise was doing all that downshifting to make passes in Days of Thunder was laughable, as once you cross 100 mph or so, fourth is your gear, period.

If you haven’t driven a race car before, or if you've never been on an oval, this method of starting at a (relatively) slow 125 mph is great. If you have experience, the straightaways are dull and the rev limiter comes way too soon, but it’s a good way to build up confidence in the tires on the banking. For me, it was all about that third session with the 5400 RPM chip. You see, in a NASCAR, you really don’t slow down for the corners at all. You just hold steady throttle as close as you can to the rev limiter without banging on it, the whole way around the track. At LVMS, the 5400 RPM chip means a 158 mph average speed, a full lap in 44 seconds, with me driving. Now that was exciting. I still wanted an extra 10, 15 mph on the straightaways, but carrying nearly 160 through a banked corner on slicks generated a ton of lateral G‘s. At one point I had to ask Victor over the radio, “Just to confirm, I can hold it at 5400 all the way through right? Don’t lift?”

“You can hold it,” he said, just like Harry told Cole Trickle.

Honestly, I would not have wanted to simply jump into the car with the 5400 RPM chip cold. Even if the first two sessions with the lower rev limiter were not exactly heart-pounding, it was a great way to work up confidence in the car and the tires before going really quick. Especially since there is no lead car to follow, and no instructor riding right seat, you get to develop the confidence at your own pace (this is a very good thing).

After a quick water break, I squeezed myself into the “Indycar.” I put that in quotes, because, while it sort of resembles what you might think a top-tier open wheel racer looks like, it really isn’t. The bespoke chassis is built in Charlotte exclusively for the Andretti experience, and in a fun and interesting twist, the 2,200-pound race car has no gearbox—at all. The same 383-cubic-inch engine used in the NASCAR is direct drive in this application, which made me scratch my head in confusion.

“You don’t want to see what happens if an inexperienced driver misses a shift in something like this,” says Joe.

The lapping procedure itself, the comms, the “don’t touch anything” procedure is fundamentally the same with both experiences. To get started, you push the clutch in (it does have one of those), and an ATV pushes you up to about 20 mph, and then you just dump the clutch and it fires up. But a gearbox isn’t the only thing you don’t have: you also are without a speedometer or a tachometer. There’s simply a coolant temperature gauge and an oil pressure gauge, and that’s it. Okay….

Victor instructs me to run the first lap at “a quarter throttle,” then another lap at half throttle, before going into “Full throttle minus,” which he describes as being full throttle, but just shy of where you hit the 5,000 RPM rev limiter.

Having watched the open wheel car sit, cold, in the pits while all the students lapped the Cup cars, I did not have a lot of confidence in the big slick tires. I felt exposed and nervous about what felt like pushing it on the banked corners. The Cup cars had power steering; the open wheel car does not. It also has a tiny steering wheel, and 12” wide slicks three feet from your face. There are wings, front and rear, but simply by looking at them I can tell they are mostly aesthetic, and not all that functional.

Even though my average speed was lower in the open wheel car (150 mph compared to 158 in the Cup car), the G-forces and effort required to steer the car felt much higher—an interesting exercise in the perception of G-forces related to steering effort and not simple speed. Unlike the Cup car, which was set up to turn left with an asymmetric chassis and very creative alignment, the open-wheel car was not, so you really had to muscle and steer it. It actually tired my body out over the short, but long-feeling 6-minute session. It gave me a massive appreciation for how athletic some of these open-wheel drivers have to be to sustain three-hour races at much higher speeds—not to mention the mental stress of driving in a pack.

Racing is dangerous, but these guys have idiot-proofed it as much as can be expected, and, at least in Las Vegas, have only ever had one customer crash a car (he reportedly drove down off the banking onto the flat apron at full speed, which, if you think about it, is one of the dumbest things someone could do in a NASCAR, and something they repeatedly say not to do).

Both the Richard Petty Experience and Mario Andretti Experience deliver on their promises: they create an approximation of the sights, sounds, smells, sensations of being a race car driver. While not a point-for-point accurate representation of what driving a real IndyCar is like, the feeling of speed, of G-Force, of running a car around a banked superspeedway just like your motorsport heroes do is right there. Having ridden shotgun with Kevin Harvick in an actual (demonstrator) Sprint Cup car, the Richard Petty experience is pretty spot-on, especially with the rev limiter raised, something I recommend absolutely coughing up the extra cash to do if you have motorsport experience, for the full rush. I would even go back for the extended session to get that limiter raised one notch higher if I find myself back in town.