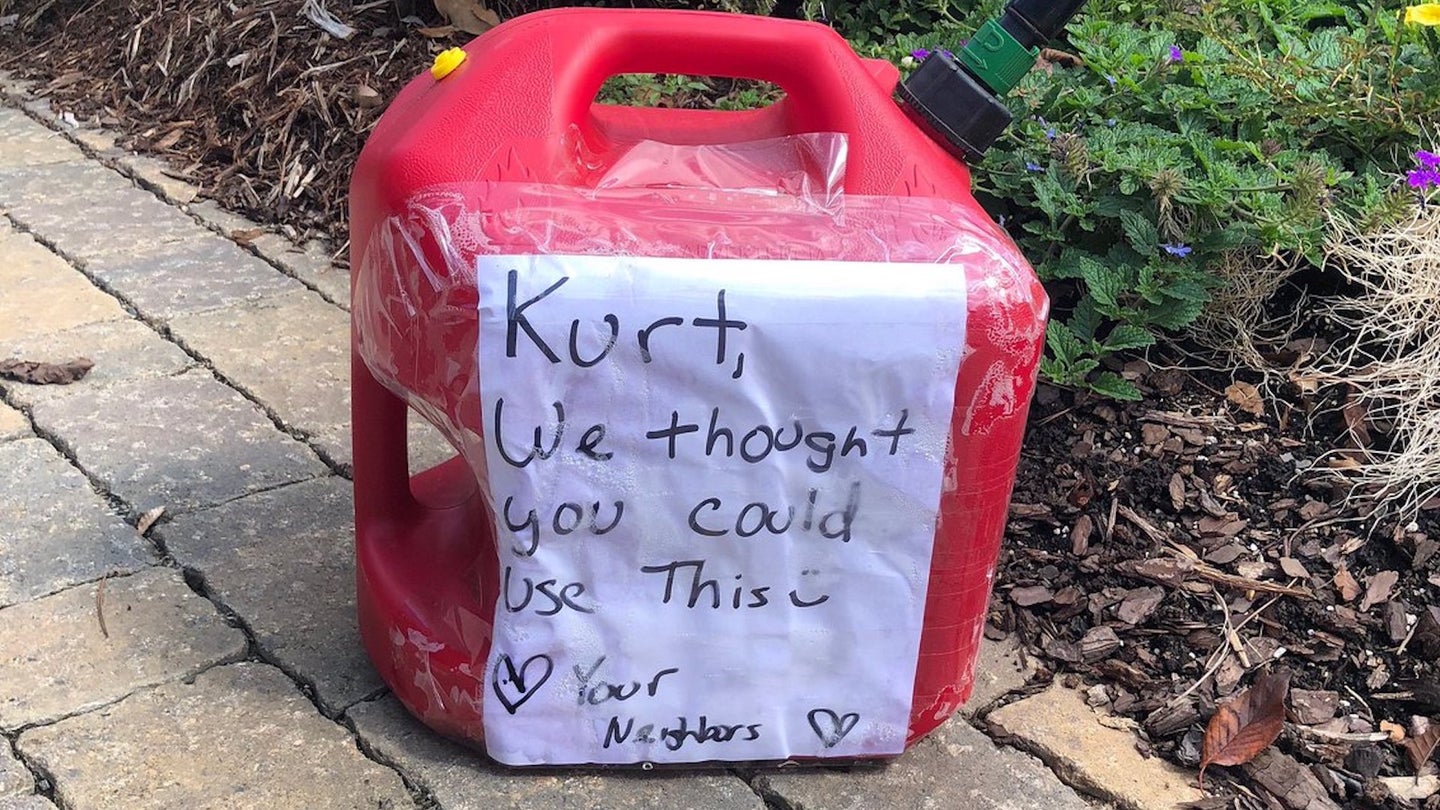 If Kurt Busch needed a reminder that he ran out of gas in the 1000Bulbs.com 500 Monster Energy NASCAR Cup Series race at Talladega Superspeedway on Oct. 14, his neighbors were quick to remind him. The driver tweeted a photo Monday of a reminder he received from his neighbors upon his return home from Talladega. A gasoline canister with a note that read: “Kurt, we thought you could use this. Your Neighbors.”

Busch and his three Stewart-Haas Racing teammates—Kevin Harvick, Aric Almirola, and Clint Bowyer—combined to dominate the race, often running first through fourth. Busch led the most laps, running up front for over half the race. He led 108 laps of the 193 that made up the event. The race was scheduled for 188 laps but was extended by an overtime restart following a caution that Busch thought was one lap too long. There also was a wreck on the final lap for which Busch thought a yellow flag should’ve been displayed, but the race remained green.

“There were two human element calls there at the end,” Busch said after the race. "I don’t know why we ran an extra lap under yellow and why there wasn’t the yellow for a dispatch of an ambulance.”

Busch was leading the race on the final lap before running out of fuel on the final lap, allowing teammate Almirola to take the lead and the race win. Had the race been one lap shorter as a result of the final caution being a lap shorter, Busch would’ve had enough fuel to make it to the checkered flag. Had a caution come out for the final-lap crash, Busch may have been able to coast to a win. Instead, he finished 14th.

Sunday’s Hollywood Casino 400 at Kansas Speedway is the elimination race of the second round of the 2018 playoffs. Busch is in comfortable position to advance, as he heads into the race fourth in the points standings. All four SHR drivers stand a good chance at advancing to the third round of the playoffs. Almirola is guaranteed advancement as a result of his Talladega win. Harvick is the points leader, and Bowyer is sixth in the standings.