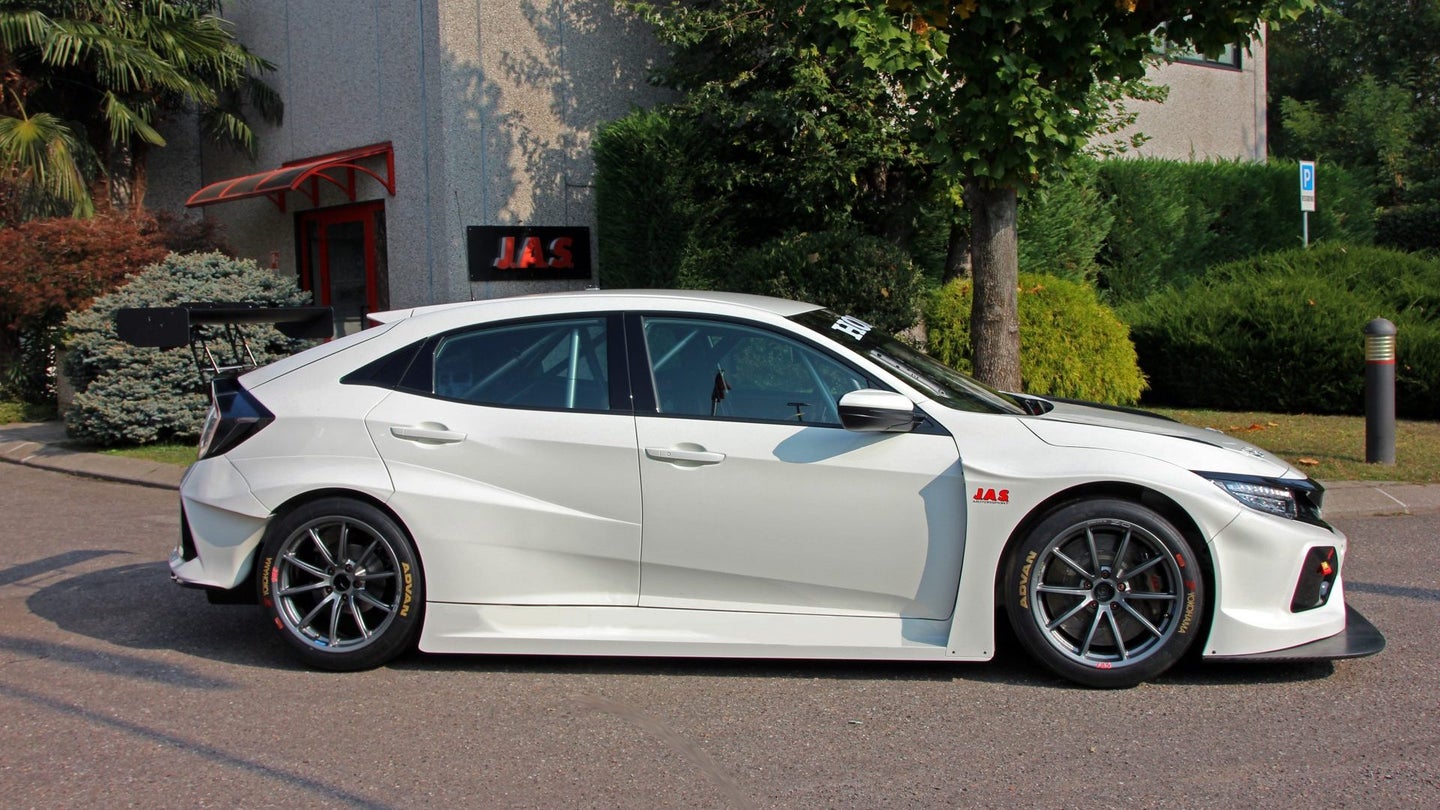 In its road-bound form, the Civic Type R is already quick enough. It possesses the lap record for street-legal, front-wheel-drive production cars at both the Nürburgring and Portugal's Estoril and not just because of its sharp handling. Its 2.0-liter turbocharged four-cylinder produces 306 horsepower and 295 pound-feet of torque that its front wheels somehow handle, allowing the car to achieve a zero-to-60 time of under six seconds.

The race car, of course, is an entirely different animal.

Like the road car, the Civic Type R TCR is a front-wheel-drive hatchback, with a 2.0-liter four-cylinder that feeds a turbocharger, but their power output differs significantly. The tuned-up TCR plops down 330 horsepower and 310 pound-feet of torque, which flows downstream through a multi-disc clutch, a paddle-shifted Xtrac six-speed transaxle, and out to 18-by-10-inch OZ Racing alloy wheels.

There's plenty of go power, but what about stopping? Honda Performance Development has that box checked too, with six-piston brake calipers clamping down on a 15-inch vented brake rotor up front, and two-piston calipers mimicking their bigger brothers in back, where they squeeze 10.2-inch solid steel rotors. Ohlins shock absorbers are at all four corners with adjustable roll bars connecting the suspension from side to side. Front suspension is of the compact McPherson strut design, and rear is multilink.

So it's fast, but is it reliable? Damn straight. Civic Type R TCRs have suffered no mechanical failures in the 12-race season that was the 2018 Pirelli World Challenge, where it won five times in the TCR class, earning Ryan Eversley a class victory.

How much the Civic Type R TCR shares with the road car is uncertain. Is it a silhouette racer with a bespoke race engine, or was it adapted from the production car? The Drive reached out to HPD for extra info on the car, and we'll update when we receive its response.

We can't help but hope a special TCR road car comes our way one day. It'd go along perfectly with the Volkswagen Golf GTI TCR...Which we also don't expect to ever make production. Oh well.