What Is It Like to Blast Off the Planet?

A former NASA astronaut describes going from zero to 17,000 mph in 8 minutes. 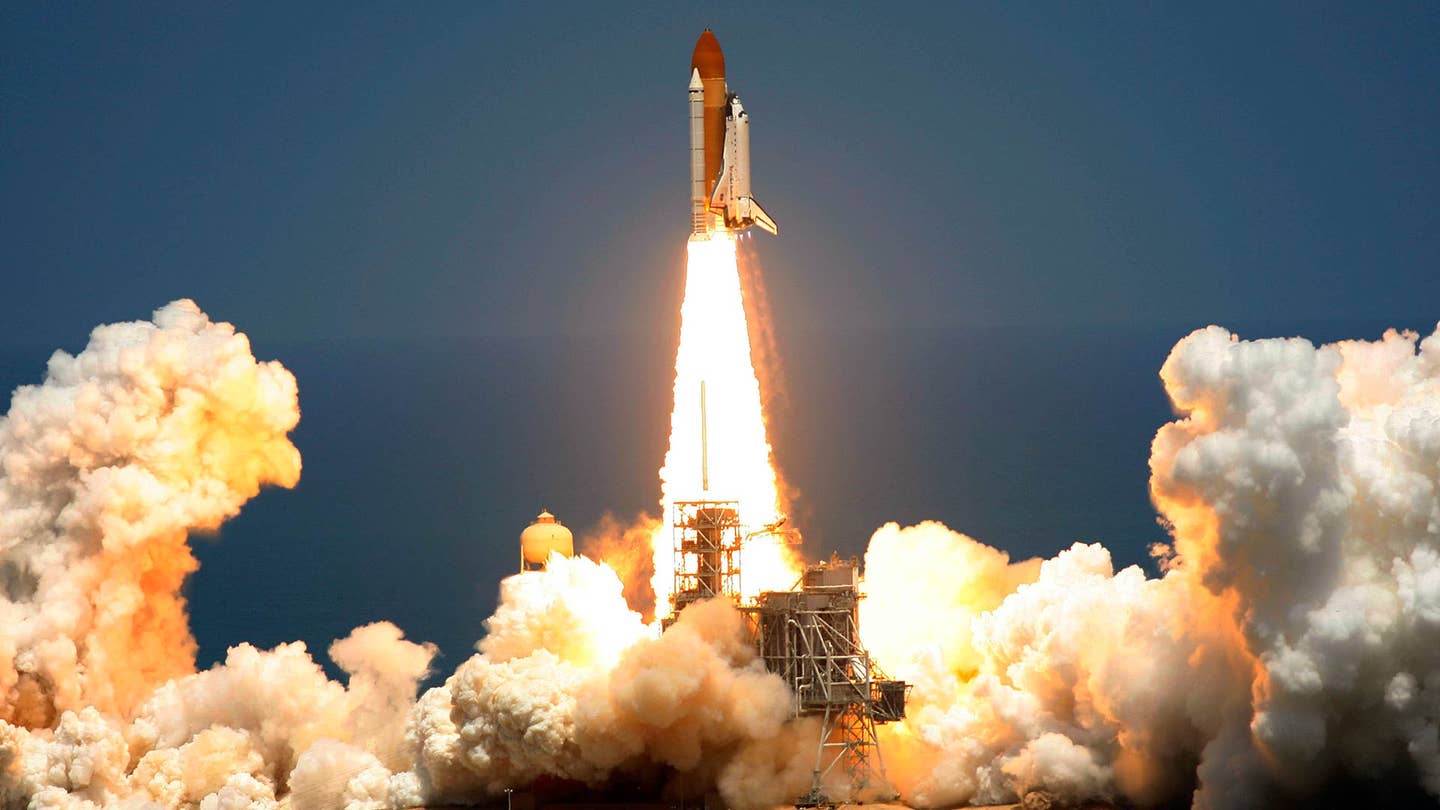 Throughout humanity’s history, nothing has fascinated us more than the heavens above. With astronaut Scott Kelly returning to earth after nearly a year in space, and SpaceX’s Falcon 9 rocket lifting off earlier this month, we wondered: What’s it like to blast off the planet? Dr. Garrett Reisman—a former NASA astronaut and currently the Director of Crew Operations at SpaceX, who flew two Space Shuttle missions (STS-123 in 2008 and STS-132 in 2010, totaling over three months in orbit)—tells the story.

On the day of a space launch, you awaken in your hotel room. In the middle of a gigantic government building at Cape Canaveral—unbeknownst probably to most of the people working there—is a hotel. It’s more Motel 6 than Ritz-Carlton, but it’s clean and it has everything you need. You spend your last few days before a launch in quarantine. They’re very careful about how food is prepared, to make sure you don’t get sick. There’s a gym so you can work out. There are doctors and LED light systems to help you with your sleep shift, so you awaken on launch day at the right time according to launch schedule. It might be 2 am, or 8 pm.

Everything on this day is about preparation and traditions that go back to the days of the Mercury and Apollo missions in the 1960s and early 70s. It’s this historic thing that you are becoming part of. You have a traditional meal with your crew, with a cake and a cake cutting ceremony. While you’re suiting up, you can sit in the chairs where Neil Armstrong and Buzz Aldrin sat when they were suiting up to go to the moon. Then you go down an elevator to your transport, and that’s where the media is assembled, at the exit of the building. When you see pictures of astronauts about to launch, this is where they are taken.

You get in the "Astrovan"—an old RV that has seats where you can plug in your suit for air-conditioning [Ed. Note: Not the Chevy Astrovan]. A driver takes you to the launch site, accompanied by a couple NASA officials. Then you hop out and suddenly you’re in front of this giant machine. It’s a poignant moment. You’re standing there looking up at this rocket that weighs somewhere around 4.5 million pounds and it feels like something completely out of science fiction. The shuttle is making sounds, hissing as liquid oxygen and liquid hydrogen are venting off. It’s this living machine that’s about to blast you off the planet. It’s really hard to get your head around.

Still, you’re not sure you’re going. Even at this point, there’s statistically about a 50/50 shot. Any number of things can happen to scrub a mission. There can be mechanical problems, or bad weather—not just in Florida where the launch site is, but maybe in Africa, because maybe you might have to do an emergency landing there.

Statistically this is not the safest thing. There have been 135 shuttle launches. We lost two of them, with all crew aboard. That’s roughly one out of 67. What we're doing is roughly as dangerous as storming the beaches at Normandy.

You ride up an elevator and at the top of the launch tower, there’s a bathroom. After that, you’re relying on your diaper under your suit, so you’re highly motivated to use this bathroom. It’s like: Hey, kids, we’re going on a long road trip…time to use the facilities! Inside the space shuttle, you have with you what’s called the white room crew—specialists who help you strap in. You put on your helmet. You put on your seat belt. The white room crew makes sure the hatch is properly closed, then they leave. You still have hours to go before launch. You’re lying there doing communications checks, and there’s nobody within a three-mile perimeter of you and your crew. It gets uncomfortable, particularly on your back. While you’re waiting, you have time to think. Whether you knew it or not, your whole life was a preparation for this moment.

People ask me all the time: How do you become an astronaut? Astronauts arrive at NASA for different reasons. Some were fighter pilots, some were doctors, some were engineers like me. The thing that joins us is that, whatever we did, we did it really well, so we were noticed and we were qualified. All of us had something to do with science and math. (Who knows if I would have gotten in that rocket if my high school physics teacher wasn’t awesome?) Even after you get selected as an astronaut, you have tons of training ahead of you. You do survival training and classroom work. You learn to fly a T-38—a fully acrobatic, supersonic jet. Then, if you’re lucky, you get assigned to a mission. At that point, you find out who your crewmembers will be and your mission role. You might be doing a spacewalk. [Dr. Reisman performed three spacewalks, totaling over 20 hours] You might be conducting experiments. Or you might be a commander and you’ll have to land the space shuttle.

After you get your assignment, you have about another year of intense training. You practice all kinds of procedures on simulators. You’ve even learned to drive a tank. When you’re onboard on the launch pad, you have to know how to perform an emergency egress. You practice jumping in these baskets on slide wires that zip you down to the launch pad’s perimeter fence, several thousand feet away. There’s a bunker there, and a tank that you can drive away in. The rocket is like a giant bomb. You hope to use all those propellants to launch into space, but if something goes wrong, and it goes kaboom, it can make a big mess. You want to get away from that thing as fast as you can. All these things go into getting you ready for that moment when you’re on board and set to go.

While I was aboard Space Shuttle Atlantis on my second mission, we were carrying a Russian payload for the International Space Station. I speak Russian and the commander Ken Ham does not. While we were waiting there for hours, strapped in, I wrote out phonetically how to say a few sentences in Russian and I handed it to him. I used a Russian word that basically means, “We’re outta here.” It was the same word that Yuri Gagarin used before he became the first man ever to launch into space, in 1961.

About 15 minutes before scheduled launch, the launch director conducts a go/no-go poll, from mission control. He asks each of the launch departments if they are go, and each has to answer go. The final one is the shuttle commander, who speaks for the crew. When he says go, that gets your attention, because now you know you’re about to blast off. [See and hear Reisman’s Atlantis mission go/no-go poll here] Our commander gave his little speech, and he spoke the Russian words I gave him perfectly.

Inside the cockpit, you don’t hear the countdown. That’s just for TV. Instead you hear status checks. The computers move to launch mode. You’re going through this cadence that you’ve practiced on the simulator, this sequence of events that the vehicle is going through.

Are you scared? Not really. You know that statistically this is not the safest thing that you can be doing. There have been 135 shuttle launches. We lost two of them, with all crew aboard. That’s roughly one out of 67. That’s your odds, in current day terms. If you look at the odds of soldiers that stormed the beaches at Normandy, I’m pretty sure it’s about the same. What you’re about to do is roughly as dangerous as storming the beaches at Normandy. You certainly are aware of that. But when you’re sitting there, you have a strong belief that it’s not going to happen today. What you’re mostly nervous about is the fact that a lot of people are counting on you. You’re not afraid of physical harm, you’re afraid of making a mistake.

The astronaut’s prayer—it’s kind of a joke—goes all the way back to Alan Shepard, the first American in space, who reportedly said: “Dear Lord, please don’t let me [bleep] up.”

Then all the sudden, you feel it. The main engines light up. You feel their power, but the shuttle is being held down. It rocks forward, and when it comes back right over the center of the pad, the solid rockets light up. And boom! That’s a huge kick in the pants. Those rocket boosters are producing 6.6 million pounds of thrust at the moment of liftoff, going to peak power in about 0.2 seconds. Then you’re going. There’s no shutting those solid rockets down. You’re going somewhere, in a hurry.

There’s a lot of shaking and noise, especially those first two minutes when the solid rockets are firing. But the shaking and the noise are not crazy; it feels basically like an amusement park roller coaster ride. You’re pulling 3 g’s. That’s not a whole lot either, compared to some of the jets the Air Force flies. The difference is that the g-force continues for a long time.

It is awe-inspiring. And then, after 8 ½ minutes, the shuttle’s main engines shut down. Instantaneously you go from 3 g’s to zero, and everything is weightless. It feels like you are being catapulted out of your seat – but you are not. You aren’t being thrown out of your seat, you just are no longer being held down into your seat. You take off your seat belt and begin to float. You’ve just ridden on the most powerful engines ever created by humanity. And the journey has just begun.