How Will Motorcycles Fit Into Our Autonomous, Connected Future?

Two wheels may be the last bastion of unconnected motoring—but not for long. 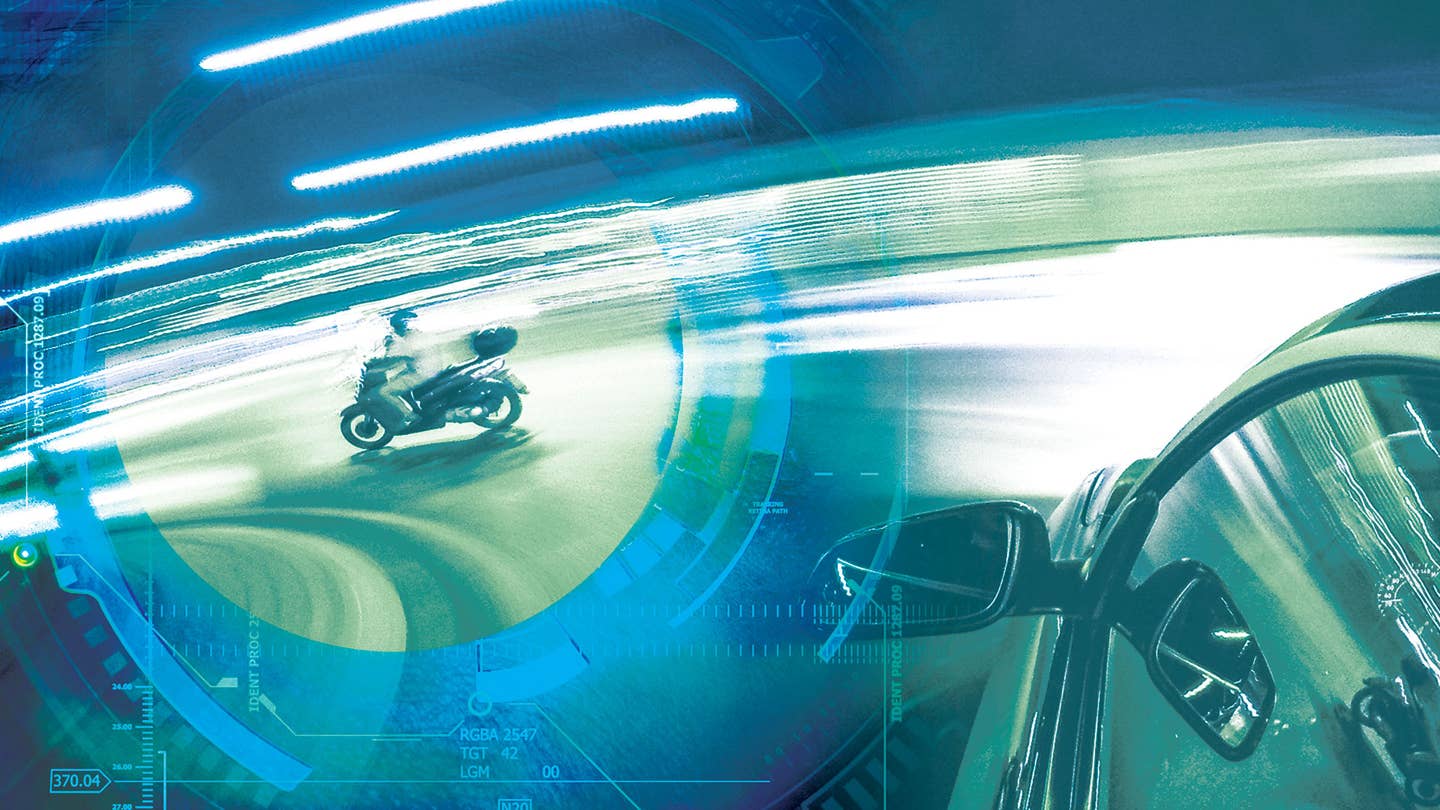 Every day, we're reminded that our autono-robo-future is just around the corner, even if it's actually years away. Motorcyclists, by and large, haven't had to pay much attention to this, but we should. The benefits are too great to ignore, and you can still keep your vintage CB around, just in case. Because, when it comes down to it, autonomous cars are just better for motorcyclists.

The biggest threat to any rider—weekend warrior or daily commuter—from any place in the world, is exactly the same: idiots in cars.

There are a multitude of reasons for this, most self-evident. And I admit, I can be that idiot, too; it's easy to get distracted or complacent behind the wheel, because behind the wheel is so damn comfy. Thankfully, we've reached the inflection point where all the automotive systems of the past century have been refined, and now the focus is on active safety.

All those sensors and cameras and all the AI computing power inside of cars, buses, and trucks are going to save lives, and motorcyclists may be among the biggest beneficiaries. As the four-wheelers of the world paying the technological and weight debts themselves, we can come along for the ride.

Unfortunately, we're still crashing alone more than 80 percent of the time, so...

There are myriad reasons why most motorcycle crashes are single-vehicle collisions. A substantial chunk of that comes down to road conditions, avoidable or not. Data can change that.

It's not just that passenger and commercial vehicles will get visual information about what's around them; in a connected world, that environmental data will be just as important for everything from traffic management to first-responder routing. Temperature, precipitation, debris—even that pothole in lane 3 that was detected by the tire pressure monitoring and traction control systems in the minivan in front of you: all of that becomes data can be relayed to the rider's phone, or even to the bike directly, alerting him of something as simple and catastrophic as a small diesel fuel spill ahead.

Any additional information is a net positive, particularly if it's conveyed to the rider discretely and effectively. And since all that data is being pulled from and conveyed by other sources, the bike itself doesn't need to be saddled with too much extra hardware beyond a modem and a few sensors, both of which already exist.

The rider is now a node in the network, with all the benefits of being recognized, and avoided. And in the rare cases (cough *bullshit* cough) where a driver is actually driving a car, a connected bike could autonomously use its lights and horn as a way to be more conspicuous—something BMW has been testing for years.

Any rider with a modicum of sense won't argue with more and better information, or cars that can't crash into you. Where it gets sticky, though, is the idea of rider aides.

The motorcycling industry has only begrudgingly moved into traction management over the past 20 years, first with ABS, and later with a variety of riffs on traction control. It's at the point now that every single Harley-Davidson comes standard with ABS, and you can find multi-stage traction control on bikes that cost less than a few months of "reasonable" rent in the Bay Area.

But when those aides kick in is still up to the rider. If the man on the seat clamps down on the brakes, or gives it a little too much twist out of the corner, that's when the electronics come in to save the day. These systems are meant to be reactive, not proactive. And for good reason.

Riding a bike is a fundamentally different experience than driving a car, and it's a conscious choice—particularly in the U.S., where it's viewed more as a toy than transportation. Because it's a choice outside the norm, anything that infringes on that unique experience isn't just viewed as suspect, but antithetical to All That Is Holy And Good. Or something.

But these systems are getting particularly impressive. Again, BMW has been at the forefront, while Ducati and their mutual suppliers are beginning to close in from behind.

And if I'm honest with myself, I do want an ABS system that can recognize when I'm pressing through a corner or panic braking when a vehicle pulls out in front of me, to help me right the bike for the best traction. Seriously, that's fucking cool, and also, I don't want to die.

Purists will decry these things. That's fine. I'll still have a few "unconnected" bikes in the garage myself. And while they're invoking whatever SKYNET meme best suits their facile view of the world, I'll just be having more fun, because I'm alive.