BMW’s Shapeshifting, Crash-Proof Motorcycle Is the Future Of Two-Wheeled Mobility

No helmet or leathers required in the Next 100 years. 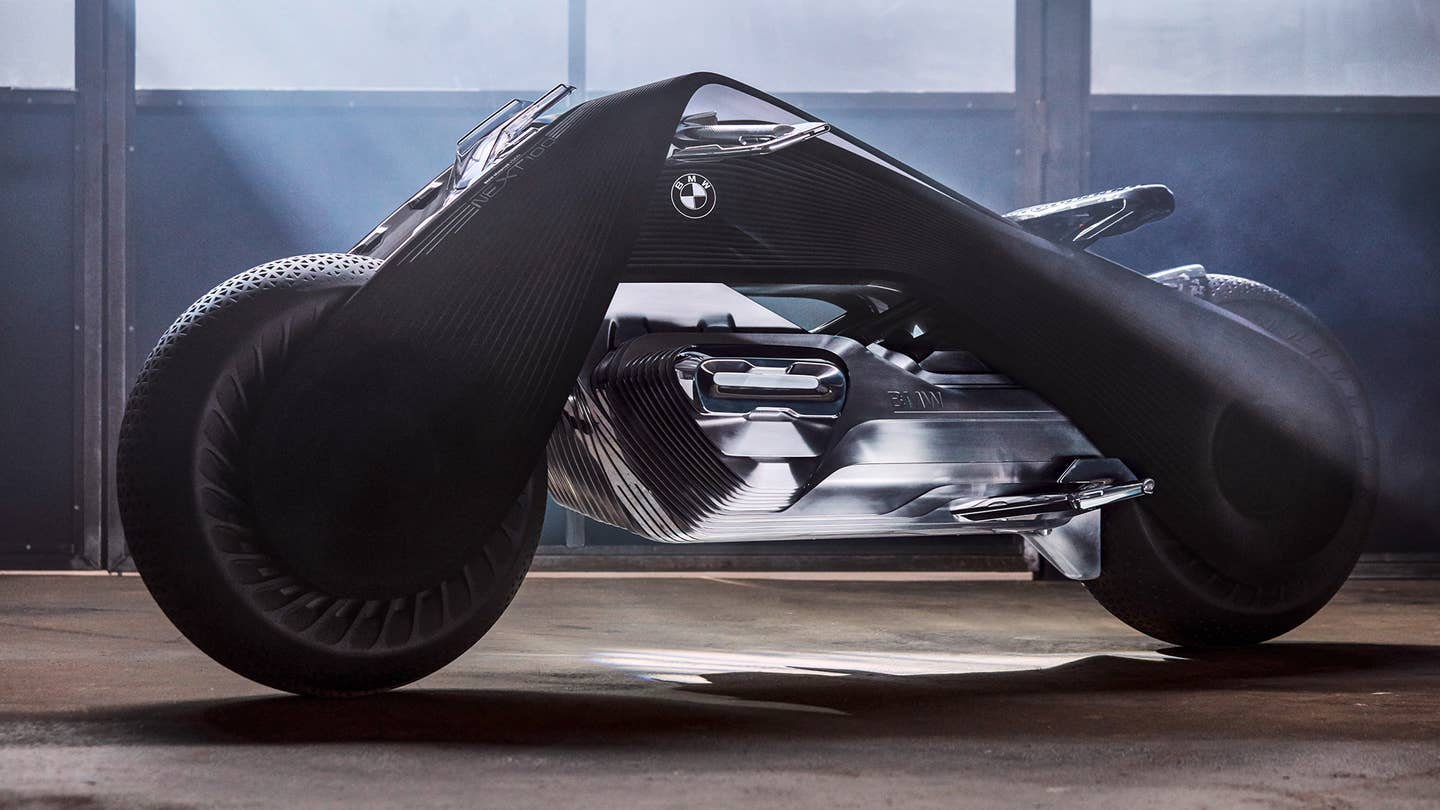 The hyper-connected, autono-future may be anathema to motorcycling purists, but BMW believes that technology has the ability to heighten—not dull—the experience for the next generation of riders.

To drive that point home, Motorrad has created a concept to join its four-wheeled brethren from BMW's batch of Next 100 design studies. These concept cars have pointed the way forward for BMW, Mini, and Rolls-Royce so far; the Motorrad Vision Next 100 is what happens when BMW's boffins apply sci-fi tech to two-wheeled vehicles.

That starts with the frame, wrapping front to back and eschewing the mechanical linkages of its second-millennium-A.D. predecessors. There's no rear swing arm, nor anything resembling a traditional suspension. Instead, BMW says the Flexframe adjusts based on steering inputs and road conditions, bending and reforming to suit its rider while providing a kind of adaptive steering that's slower at high speeds and quicker at low speeds. The system integrates the tires, which have variable tread that adjusts on the fly to improve grip.

The engine may seem mildly reminiscent of the iconic boxer, but on the inside, BMW claims the Motorad Next 100 is fitted with a "zero-emissions drive unit" which we assume is powered by distilled unicorn farts. It, too, morphs depending on speed, with the "boxer cylinders" tucking in when parked and extending outward while riding to boost aerodynamics and improve rider comfort. BMW says the motorcycle is "self-balancing," but as with the engine, doesn't get into pesky technical details.

Because of that theoretical anti-tipping safety feature and aero-tested surfaces that shield the rider as effectively as a full fairing, BMW says anyone could throw a leg over the Next 100 without a helmet or bulky protective gear and be safe. But even riders of the future still would to shield their eyes from errant bugs and gravel, so BMW has thrown in an eye-controlled visor that overlays all the data a rider could want onto the road ahead.

Naturally, like the rest of the Next 100 lineup, BMW's designers had carte blanc to make magic with this self-balancing bike, material sciences and laws of physics be damned. But considering BMW is one of the few motorcycle makers that's taken connected bike technology seriously, the rider aids and information displays aren't nearly as far-fetched as some of the other vaporware. Don't be surprised to see some of this tech on bikes in a decade's time.