It's been a long road for the Oregon three-wheeler firm, but their "Fun Utility Vehicle" finally feels well-polished just in time for customer deliveries. 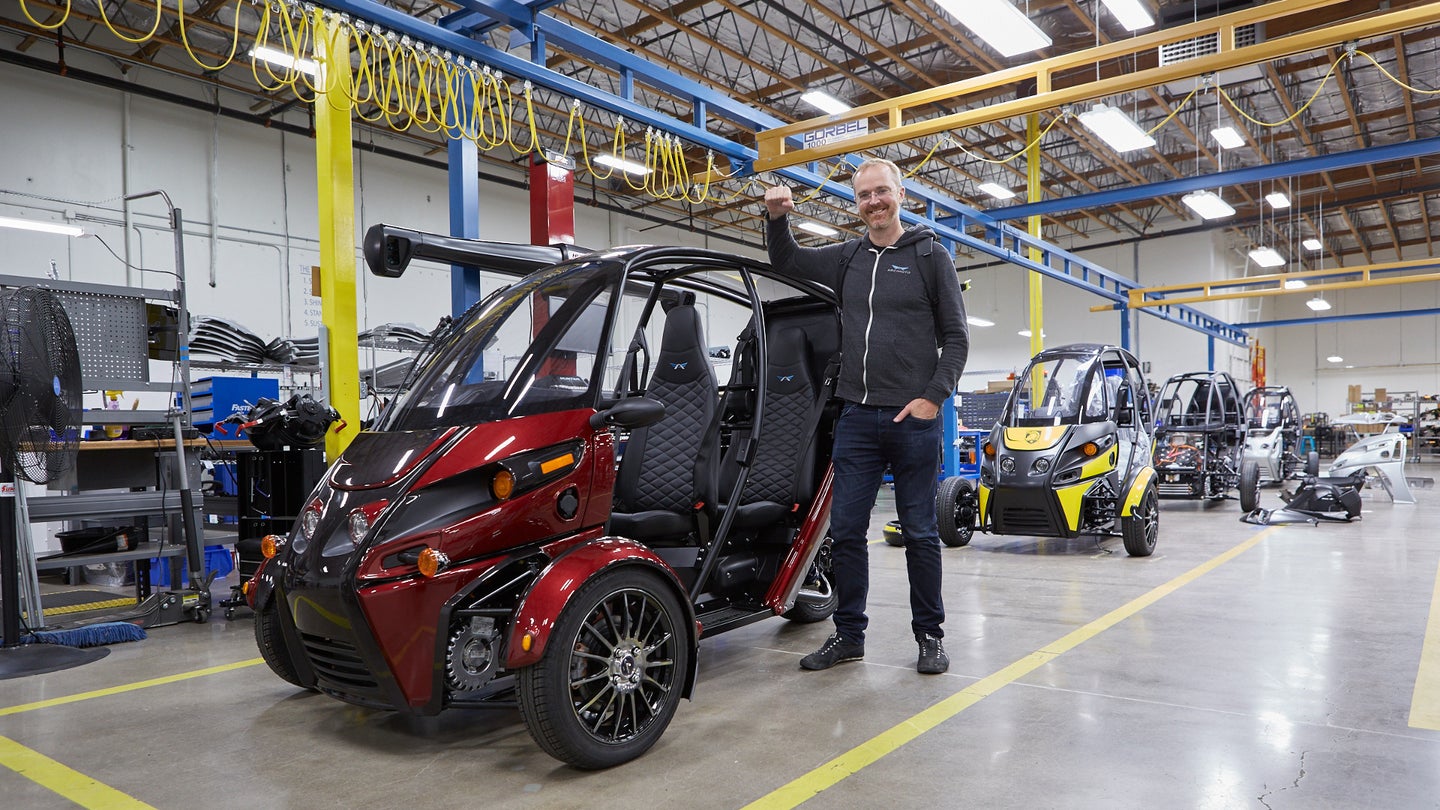 Developing a vehicle is a little like building a house. It doesn't take that long to get the "bones" in place such that you can tell what it will look like, at which point people seem to think it's basically done... when in reality, a good 80% of the work remains. From there the grind of development—tweaking, testing, validating, certifying—seems like it never ends, even though to untrained eyes the thing looks just like it did when you first showed it to them.

When I first drove Arcimoto's three-wheeled electric "Fun Utility Vehicle" last summer, it was in a "Beta" configuration that struck me as an interesting and unique vehicle that had fun in spades but was still a bit rough around the edges. The mix of regenerative handbrakes and hydraulic footbrake were a bit awkward to use, the power delivery felt raw and combined with the fast steering things could get a bit jerky. Late last week, after a year of detail work, the Eugene, OR based company started official series production and deliveries so I was anxious to see if they had sufficiently polished up their quirky little whip in time.

I caught up with founder Mark Frohnmayer outside a Portland, OR hotel the day after the SOP event, just as he was explaining to a curious onlooker just how much blood, sweat and tears the FUV had taken to get to this point (a lot). He didn't hide the fact that lots of work remains to build up to full production volume, develop and certify several planned options as well as delivery- and first responder-focused variants, but he was anxious to see if I noticed any improvements over last summer's Beta version. So I jumped into the nearest example, shut the new soft half-doors, buckled the BMW C1-sourced double shoulder belts, used the thumb selector to put it into drive and slowly pulled away.

The first time I drove an FUV, I had taken nearly 10 minutes in the lot behind Arcimoto's Eugene factory to get my bearings with the odd car-motorcycle hybrid controls, and having not been in one for over a year I thought I might need another brief orientation. As it turned out, I didn't. Without even thinking about it, I was able to sit down, get familiar with the controls in a second an get right to the driving experience.

The refinement that's gone into the FUV was evident from the very start: both the power delivery and the steering boost have been dialed back, keeping lower-speed maneuvering much smoother and more stable than on the Beta. Where before it seemed that the throttle and steering were each doing their own thing, unbothered by their impact on the other, now they respect each others limits. The slight jerkiness and occasional "oh dear, I've asked for too much steering and throttle at once" feeling I'd experienced before have been polished away from the typical driving experience, leaving a far more planted, tractable and mature experience.

One of the big difference makers was unexpected: the bike-style regenerative brake lever has been replaced with a small finger trigger, which allows you to "dial in" just the right amount of regen with surprising precision. Frohnmayer admitted that this change came from Arcimoto's lawyers, who were concerned that customers would think that a bike style lever would offer a bike brake effect rather than a regenerative brake, but aligning form and function turned out to be a surprisingly big win for the user experience. With just the right amount of spring loading, the little finger trigger offers smoothly-ramped regenerative braking that adds a completely new level of engagement to the FUV's unconventional controls.

Like any EV,  acceleration off the line is the FUV's main party trick and although Arcimoto has smoothed out the rush of torque it's still plenty to earn the "F" in in its name. Blasting away from a stop and then grabbing the regen trigger to coast down to legal speeds is enjoyable way that doesn't really compare directly to any other vehicle, as is the weirdly open-yet-protected feel of the vehicle. The Beta version felt more like a motorcycle, with the kind of rough and raw feel that begs to be thrashed, but this production version feels like something more mature. Not a car... but also not not a car, if that makes any sense.

Unlike the exotic little Electra Meccanica electric three-wheeler I'd driven on the same Portland roads since my last time in an Arcimoto, the FUV no longer feels even remotely exotic. Rather than folding into a low little cockpit, you sit very upright in a tall package that won't get missed by car drivers. Even though you get that micromobility-like sense of connection to your surroundings from the semi-open cockpit, you stay warm and dry. Though your brain tries to tell you to stick to low-speed streets, when you find yourself on a busy higher-speed road you have no problem keeping up with anything that car traffic dishes out (up to 75 MPH). And of course you have that second seat as well as a smallish cargo container, which help the FUV earn its "U."

In fact, if I had to boil down the result of Arcimoto's many subtle refinements to the FUV I'd say that before I got the "fun" and now I'm starting to grasp the "utility." Whereas before it felt like something for a younger or more thrill-seeking niche audience, I can now see retired baby boomers using the FUV to run errands or visit friends. Not because of any fundamental changes to the concept, but because the whole thing just feels more approachable, predictable and solid. It goes to show that as much as we may get caught up in things like the number of wheels or drivetrain type, the actual feel of a vehicle (especially an unusual one like the FUV) depends almost entirely on the refinement of almost-imperceptible details.

Of course, Arcimoto still faces a lot of work to turn such an unconventional vehicle into a viable business. Production levels are currently just one vehicle per day, with plans to ramp to two per day in October and five per day by the end of the year, with a "step change" planned along with price reductions and new variants next year. Though Arcimoto has a deal to deliver FUV's to San Francisco tourist icon Go Cars, its (likely crucial) talks with the big names in shared mobility are still in early stages. Finances are predictable tight, making cars is (proverbially) hard, there's no established game plan for a vehicle like this, and there are always a million ways to fail.

Still, it's impossible not to be impressed with the progress Arcimoto has made... and not just over the last year. After my ride, Frohnmayer mentions that it was the ten year anniversary of the launch event for the abortive Arcimoto Pulse, which I had covered with deep skepticism about 18 months into my own auto writing career. My skepticism about the Pulse had been warranted, but Arcimoto has proved that as the company it has the soul of a fighter: they've fundamentally modified their original design some eight times since then, not to mention the countless tweaks that have its vehicle finally feeling like a real, mature product. They've kept going after everyone, from Detroit to Silicon Valley to Eugene's small-town gossipers to (yes) myself, counted them out

Not only that, they've made a vehicle that feels like it's a real product made by a real company and not just a prototype that was hastily banged-together in hopes of raising a seed round. That in itself is a real accomplishment, and a crucial milestone for any vehicle startup. I'll definitely be watching Oregon's plucky little vehicle maker with renewed interest.