Electra Meccanica’s three-wheeled single-seater shows potential, but comes up against the constraints of its form factor. 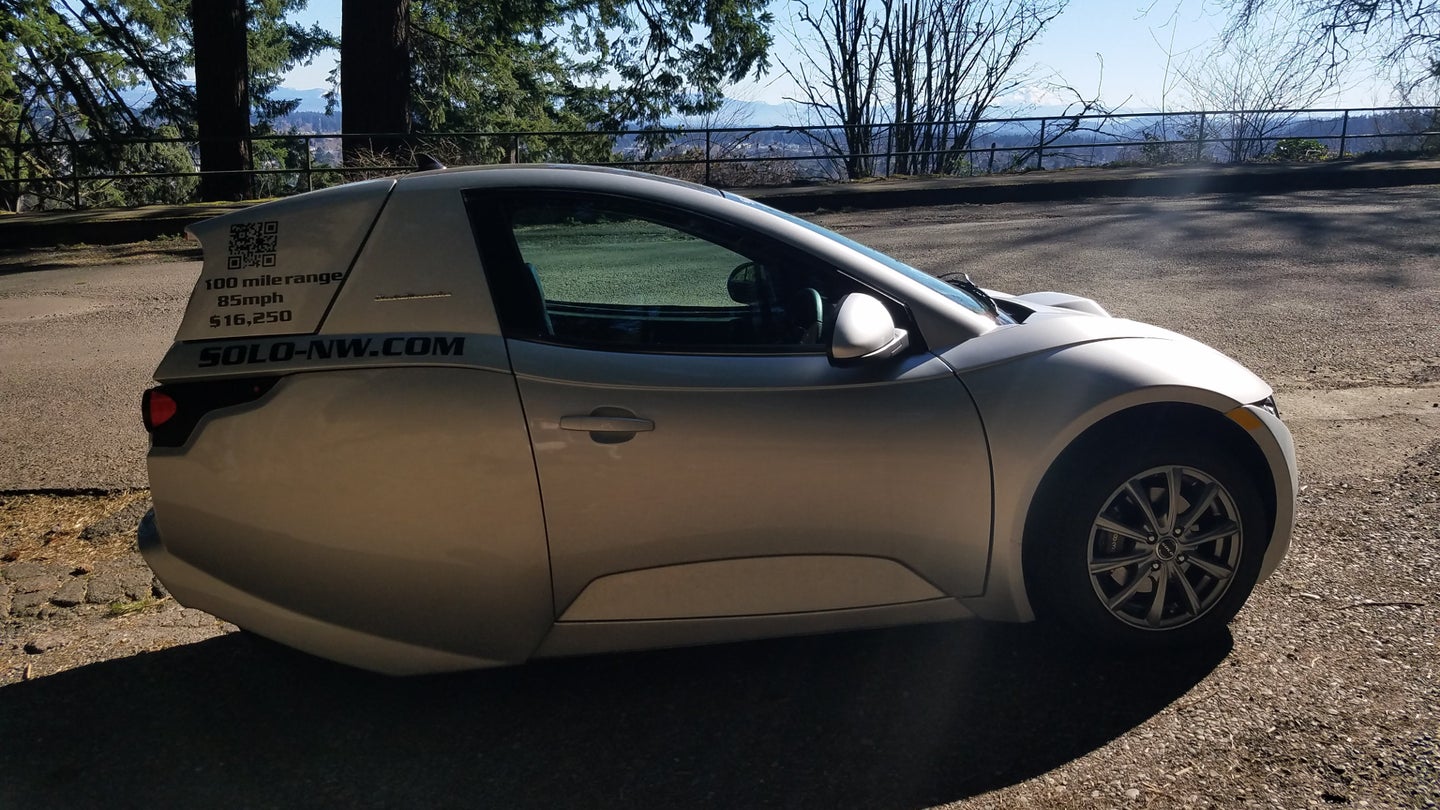 If you want a new car but only have $16,000 in your budget, it's important to set your expectations at an appropriate level. The established automakers only offer a few stripped-out subcompacts at that price point, and if the base versions of the Chevy Spark, Nissan Versa, Mitsubishi Mirage and Fiat 500 don't do it for you, you're more or less out of luck. But if you're willing to give up the well-known badge, the fourth wheel, and the ability to carry passengers, another opportunity beckons: an impossibly tiny single-seat commuter called the Electra Meccanica Solo.

Before we go any further it's probably important to make a few disclaimers. For starters the Solo isn't technically a car at all. Like most low-weight three-wheelers it's regulated and registered as a motorcycle, meaning it doesn't pass the crash safety standards that traditional cars must comply with or offer airbags. The Solo I drove around Portland's East Side is also one of about 45 "pre-mass production" versions produced in-house by Electra Meccanica, and the company says that the production version will be considerably more refined than what I drove.

For some people, specifically anyone seriously considering one of the mainstream cars listed above, these are probably important considerations that will profoundly affect their buying purchase. But let's not kid ourselves: the number of people who would seriously cross-shop something as prosaic as a Nissan Versa with something as unique and extroverted as the Solo is probably close to zero. Either you love the idea of a tiny three-wheeled single-seat runabout made by a startup or you don't, and if you do there's a lot to like about this one.

Three-wheeled vehicles are generally not known for their beauty, but the Solo is about as attractively designed as the genre allows. Nearly as wide at the front wheels as it is tall, the front clip almost looks like it could have been taken from a handsome miniature sports coupe, albeit one with a third headlight cluster in the center of the hood. But whatever normalcy the Solo's front fascia engenders goes out the window as soon as the eye reaches the windscreen, at which point the entire design tapers dramatically toward the back end. There's an almost AMC Gremlin-like quality to the way the design abruptly disappears behind the driver's seat, but rather than just being chopped vertically like a Gremlin the Solo's tail is also pinched away horizontally. Despite the unusual proportions the design somehow comes together far more cohesively in person than it has any right to, with help from stylish details like the Italianate round taillights and brand script.

The exotic car cues continue when you go to enter the Solo, lowering yourself into the seat and (in the case of a six-footer like myself) pulling your trailing leg into position. The cabin is as tight as you'd expect a single-seat vehicle to be, but because there's not much to do from the driver's seat besides driving it doesn't feel overly restrictive. The controls and central display are incredibly spartan and although Electra Meccanic says they will be upgraded in the production version it's hard to expect much more from a relatively inexpensive and low-volume car. At least the controls are all familiarly car-like compared to say, the Arcimoto FUV I drove last Summer, so I was able to hit the road almost as soon as I folded myself into the seat,

The Solo doesn't jump off the line the way you might expect a sporty, lightweight EV to, but it certainly seems capable of the claimed eight second 0-60 time and it's pleasingly brisk when accelerating from about 10 MPH to about 40 MPH. Located mere inches from your head, the 82 horsepower AC synchronous motor provides the most distinctive noise I've ever heard in an EV drivetrain, an almost musical Star Wars podracer-like warble that adds to the Solo's Italianate charms. I didn't test the company's claim of an 82 MPH top speed, but its slippery .24 coefficient of drag makes it seem plausible under the right circumstances. Claimed range is 100 miles, and the 17.3 kWh battery takes 3 hours to fully recharge at 220 volts or half that at 110.

The limiting factor for the Solo seems to be its suspension, which produces ungainly clunks on significant road surface "features" and bottoms out in scary fashion on full-on potholes. After a few jarring bumps I kept an eye out for even the smallest wrinkles in the road, and luckily the Solo's narrow track and tight steering make it easy to dart around obstacles without fully departing your lane. Cornering is respectable for a three-wheeler, and capable of managing any normal commuting duty without fear of disaster, although the unavoidable fear of rolling any three-wheeled vehicle kept me from pushing the limits of the handling.

Zipping from the Willamette River up to Mount Tabor, the Solo feels competent as a short-distance urban commuter that can split gaps and park in spots unavailable to a typical car while still being rapid and visible enough to handle full-sized traffic. The trade-offs are fairly predictable for what the Solo is: at least in this "pre-mass manufactured" spec, it lacks refinement of all kinds. From the easily-unsettled ride to the variety of creaks and rattles, and from the extremely basic interior to the clunky controls and unassisted steering and braking, it provides a far more raw experience than many might look for from a daily commuter.

Some of these shortcomings may well be mitigated when Electra Meccanica's manufacturing partner Zhongshen starts building production versions, which will have power steering and braking among other improvements. Even if they weren't though, the Solo comes close to being the kind of vehicle that makes a virtue of its raw, unfiltered experience. Sitting low in a lightweight composite tub, listening to the unique warble of the electric motor and manipulating the heavy but fast steering rack, the Solo almost starts to feel like a miniature exotic or tiny EV racer. It even grabs attention the way an Italian exotic would, drawing looks of astonishment, curiosity and bafflement (not to mention multiple thumbs-up) from all who encounter it.

Unfortunately, the feeling of Lotus Elise-meets-Micromobility never fully gels, mostly because of the limitations of the three-wheel setup. Even with racecar-fast steering the Solo doesn't feel joyfully tossable the way it would if it were the car it feels like it wants to be, and the low-end power delivery falls just short of being truly sporty. With four wheels the Solo could be an exotic electric go-kart commuter that could be a fantastic weatherproof compliment to motorcycle or e-bike, but then it would be saddled with all the regulatory burdens that make regular cars so heavy and expensive. Given the constraints of the form factor, Electra Meccanica has done the best they can and with continued refinement a Solo could find a market.

For me, the lesson of the Solo is that we could have way cooler cars if regulations didn't more or less force makers of lightweight, full-speed vehicle designers into the three wheeler dead-end. It also made me extremely excited to drive Electra Meccanica's Tofino, a four-wheeled, two-place lightweight electric roadster that looks like the car that I imagine the Solo wanting to be. Between the refinements needed to improve the production Solo, the search for sufficient buyers for such a quirky ride and the challenges of translating its lightweight charms into a four-wheeler that passes much tougher regulatory hurdles, Electra Meccanica has its work cut out for it. But if you're hoping the electric future isn't all giant, heavy muscle sedans or bland commuter pods, you can't help but hope they pull it off.