Driving Complexity and Speed: The Puzzle-Piece Synchronicity Between Tele-operation and Autonomy

Kartik Tiwari, the Chief Technology Officer at Starsky Robotics, explains why autonomy and teleoperation go together like peanut butter and jelly. 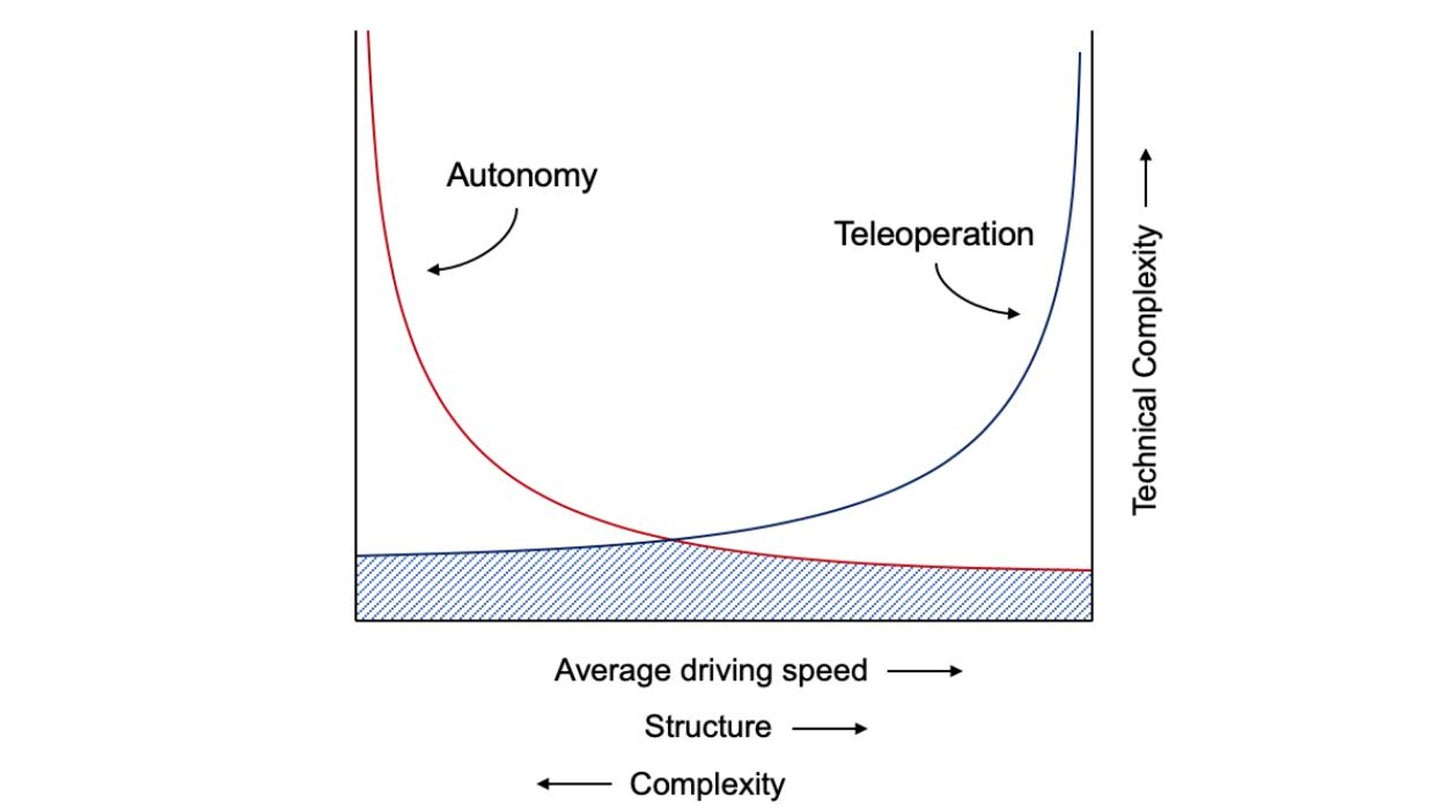 [Editor's note: Kartik Tiwari is the CTO of Starsky Robotics, a company that is enabling long-haul trucking without an onboard driver. Their vehicles have been a challenge to cover, given that they use a unique mix of automated driving and teleoperation, and thus don't fit into any one easy category. In today's expert insight post, Tiwari explains why this approach makes sense from a technical and safety perspective... if not from a terminology perspective.]

That sounds bad, right? Because that sounds like the solution is to solve two compounding problems. But at Starsky Robotics we’ve been working on the two technologies for three years, and we’ve discovered that tele-operations and autonomy exist in a strangely appropriate, complementary relationship. Their strengths and weaknesses fit together like puzzle pieces. Autonomy is easy where tele-operation is difficult. Also, the inverse is true: Tele-operation is easy where autonomy is difficult. And by combining the two, it’s possible to solve 100 per cent of driving—to completely remove the human driver from the vehicle.

The relationship between tele-operation and autonomy exists because speed is an inverse predictor of driving complexity. That’s a pretty fundamental law of driving, and driving infrastructure.

Interstate highways exist at one end of the speed/complexity relationship. They feature high speed and low environmental complexity because they’re about as structured an environment that exists in the world. Fences prevent pedestrian and animal access. Vehicles enter and exit via smoothly curving on and off ramps. Road curvature is limited to what is easily navigable at 60 miles per hour, and pavement is smooth and well-maintained. This ensures that vehicles can drive at higher speeds.

At the other end of the speed/complexity relationship are truckyards—essentially, the parking lots where tractor-trailers load and unload their goods. Truckyards are among the most complex environments we’ve encountered. Not coincidentally, vehicles move about truckyards very slowly. That’s because other trucks move about these yards in random ways as they reverse and maneuver themselves into appropriate positions. Pedestrians walk to and fro as they get into and out of vehicles. Boxes and curbs can appear in random places. The asphalt can be cracked and potholed. Truckyards are completely unstructured environments, which makes it difficult for autonomy to handle them.

In fact, these two technologies are inversely synchronous in a remarkable number of parameters. The relationship applies in every driving variable we’ve come across. The very thing that makes tele-op difficult tends to be the same thing that makes autonomy easy—and vice versa.

Crucially, we’ve found that development of tele-operation capability and autonomy needs to happen together. Since both of them complement each other, they have to be developed congruently, from the beginning, in a manner that perfectly meshes their capabilities.

Which brings us to the Bonneville Salt Flats, and Rollie Free. At the salt flats, there are no buildings, there is no traffic, there are no merging lane lines. It is an environment without complexity. Rollie Free opted to set his motorcycle land speed record on the Bonneville Salt Flats because of the same fundamental law of driving that we mentioned before: Environmental complexity is inversely proportional to driving speed.