This Alpha Performance twin-turbo R8 V-10 will give you delightful nightmares. 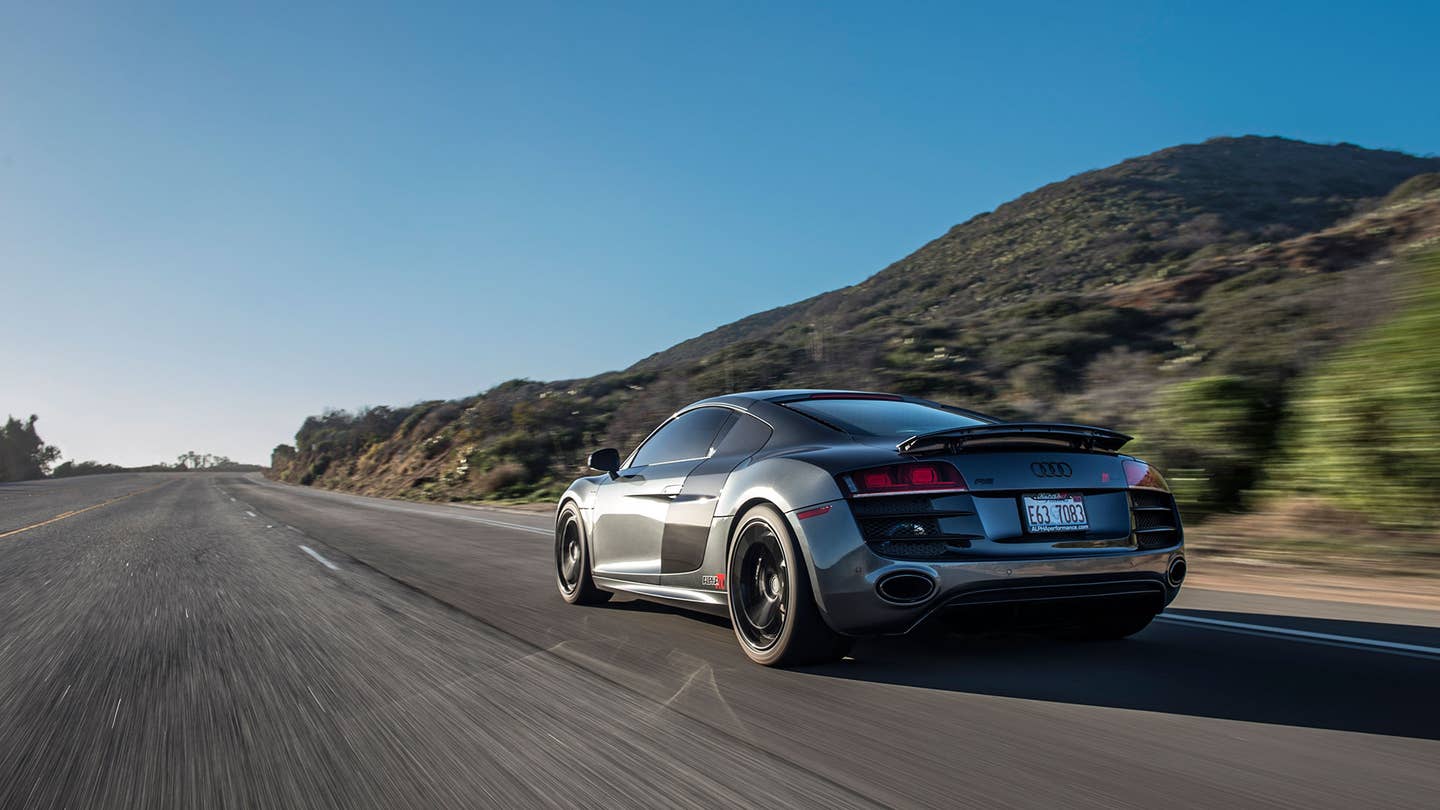 When Alpha Performance by AMS bolts two turbochargers to the Audi R8’s 5.2-liter Lamborghini-sourced V-10, that’s enough, says the company, to thump output from the standard 540- all the way up to 921-horsepower. That’s dang close to 1,000 horses—and with the right gas and some more boost the full grand is attainable—but it’s still barely within the boundaries of mortal experience. And yes, it's surreal to drive.

It’s that fourth digit that’s so intimidating. It removes the horsepower rating from the world of the comprehensible and launches it into geosynchronous orbit, out beyond belief. Spelled out, it seems absurd – “one thousand horsepower.” Not that “1,000 hp” seems more modest. This isn’t a story about a 1,000-horsepower car. It’s about one that comes agonizingly close.

In fact, on 100-octane fuel, Alpha claims the blown V-10 will make more than 1,050-horsepower and more than 750 lb-ft of torque. AMS Performance cut its teeth building epic Nissan GT-Rs – all-wheel-drive rocketships that run sevens in the quarter-mile. Moving on to the semi-exotic R8 seems a natural evolution.

Aftermarket turbo installations on street-bound cars are difficult to do well. The making power part of the equation is actually easy. If enough fuel and air is stuffed into a cylinder and ignited, that’s going to make a bigger bang than simply letting the engine breathe on its own. The tough part is making it work in a civilized, easygoing manner so that the power can be used.

A race car can be tuned to generate power at wide open throttle and fortified to withstand the onslaught. It can practically be tuned with a sledgehammer. Light switch throttle application is fine, turbo lag doesn’t matter and if the turbines wail loudly, who cares? The point is to win.

A car that lives on streets, however, spends most of its drive time at part throttle, idling, or stuck in traffic building heat. It shouldn’t snap, crackle, or pop no matter how long it sits at traffic lights. It can’t barf up coolant every time it’s shut down. The owner may want to hear his own thoughts. It’s a vastly more difficult challenge to develop a turbo installation that behaves well enough under those conditions to retain some dignity. And there isn’t a pit full of mechanics waiting to service it either.

Approaching the blown customer-owned 2014 R8 that Alpha brought to the Hyatt Regency Westlake in Southern California, the first order of business was to look for some telltale kludges. Maybe some taped up wiring, welds thicker than a squirrel or exhaust tubes rattling against the bodywork. Lurking puddles.

The Alpha R8 passed those tests.

Prices for the “Alpha 10” twin-turbo system start at $38,999.95 because, God knows, $39,000 would be too much. That doesn’t include installation labor, however, and at that price, quality components should be expected.

The system is built around an aluminum support frame that’s a bit Star Trek: The Next Generation in appearance but which the company says isolates the other pieces from shocks and vibrations. The Garrett turbos themselves hang on either side of the frame's spine and incorporate Billet compressor wheels. A large, liquid-to-air intercooler is positioned forward of the turbos, under a carbon fiber cover and above the engine itself. The system also includes blow-off valves, wastegates and things that keep everything lubricated. The exhaust system flows freely and sounds great.

There’s not much drama when the Alpha R8 is fired up. Sure, there’s some additional exhaust noise compared with the standard V-10 R8, but there isn’t a lot to indicate that there’s a beast caged in the back.

The clutch take up on the Alpha R8 was reasonable and the gated shifter found first as easily as the stock vehicle. Leaving the hotel parking lot, the car entered traffic without any conniptions. Under 1/8th throttle, the car behaves (at least in this short exposure) like any other R8. I pointed the car toward the Santa Monica Mountains and the canyon roads that run through them.

With room to run, in second gear, I finally tipped into the throttle. It responded linearly; the power coming on in a controllable fashion. As the revs built, the tach needle swinging up past 4000 rpm, I could hear the whoosh starting just behind my ear. The speedometer’s pointer was swinging into the triple digits with utter alacrity. (This thing is so fast, I’ll use a word like "alacrity" without knowing what it means simply because it sounds fast.)

This is as easygoing an aftermarket turbo system as one can imagine. Until it isn’t. I dropped back down into second at about 30 mph and mashed the throttle. The entire cockpit seemed to constrict. The steering felt as if it were being ripped from my hands and orbital plates of my skull began separating. Through dilated pupils, the atmosphere itself appeared to whip itself into a oxygen-nitrogen meringue. Then all four tires broke free and started smoking.

Get up near 1000-horsepower and it gets real easy to kill yourself. In a corner, slamming on the accelerator would incinerate all directional control. This much power simply can’t all be summoned at once; not even by an all-wheel-drive supercar like the R8. This is advanced rocketry and respect must be paid. How quick is it? With a perfect launch atop a sticky surface, the Alpha 10 R8 should rip from 0 to 60 in well under three-seconds and run the quarter in the low 10s on street tires. Top speed? Somewhere between a zillion and a zillion and five.

If you have a V-10 R8 sitting around, coming off warranty and seeming tame, then bolting on the Alpha 10 turbo system can be a rational way of chasing an irrational dream. That $45,000 you'll spend, after installation costs, is still a lot cheaper than a Ferrari LaFerrari, Porsche 918 Spyder or a heart transplant at Johns Hopkins. Installing this kit takes the R8 from being an every day machine and turns into a very, very fast toy.

But mine was an extremely short exposure. This turbo installation is gorgeous and impressive, but I have no idea how well the V-10 handles the boost over the long run. Or what happens when you accidentally feed it some regular gas.

The week after driving the Alpha 10 R8, I got into a Mazda MX-5 Miata. With only 155-horsepower from its four-cylinder engine, the Miata isn’t anywhere near quick by the standards of any R8. But all those horses are usable every day and in almost every situation. You can go full throttle in a Miata all day long, enjoying every freeway on-ramp like it’s the corkscrew at Laguna Seca. You don’t need 1000-horsepower to have a good time.

Conceding that, there’s nothing else like feeling an army of horses behind your back trying to escape the Earth’s gravity.