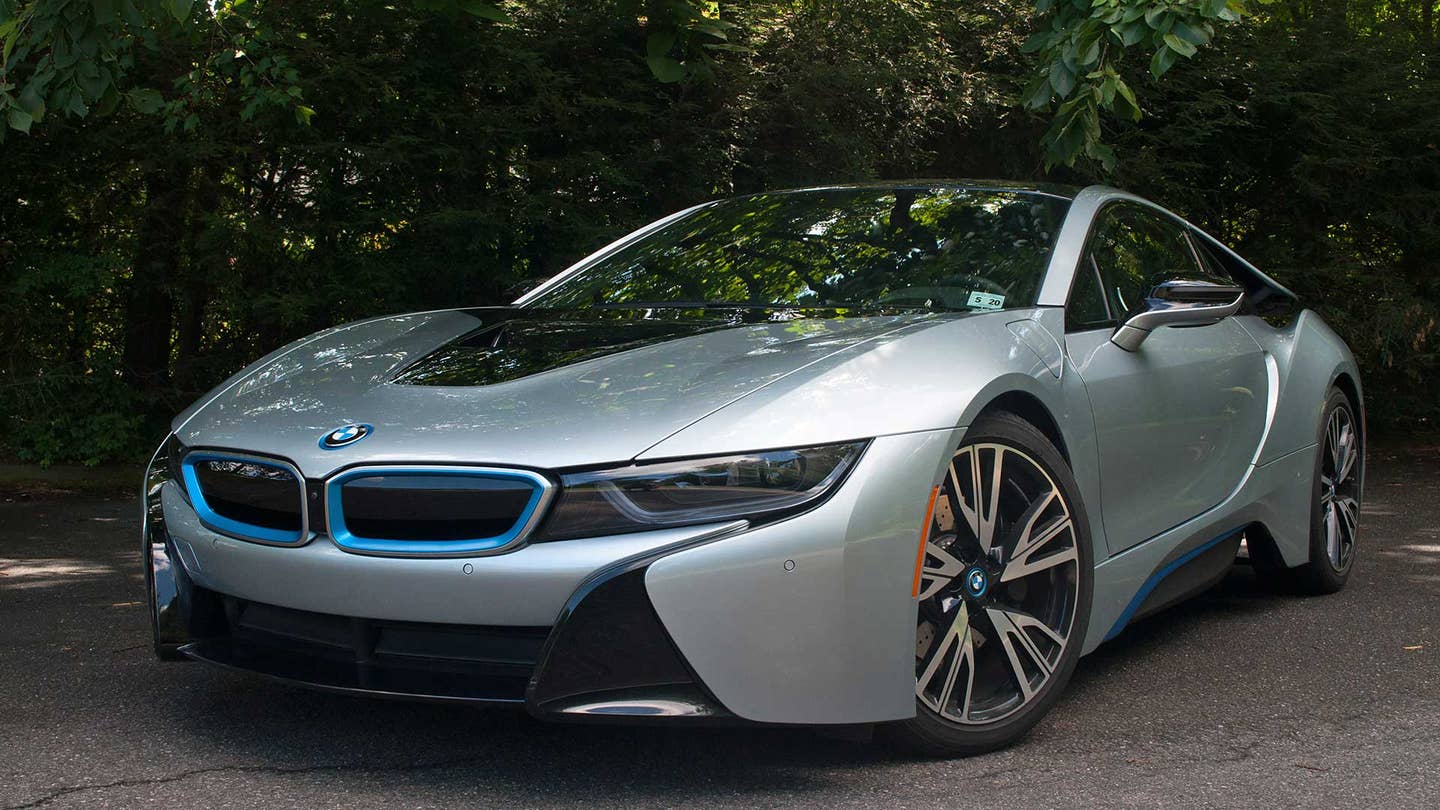 We drive six-figure supercars often enough that we get accustomed to the sounds, the fury and the unholy, carbon-belching standard recipe of raw speed. But what happens when a supercar emerges with a different approach toward the net goal of go-fast? The BMW i8 showed up in my life recently, replacing a Lamborghini Aventador LP 700-4 Roadster, and it made a brash attempt to debunk the perceived supercar wisdom.

You Are Stuck on Spaceship

Whatever the i3 EV hatchback tries to be, it can’t elevate BMW from other electric commuter cars that cost thousands less. Not in performance, and most certainly not looks. (“I’ll take the breadbox with eucalyptus wood, please,” said no car-shopper ever.) The i8 is BMW at its very best. Groundbreaking, ceiling-shattering, boundary-stretching. Clichés were invented for automobiles like this. It’s not the all-wheel-drive plug-in hybrid powertrain that’s extraordinary, since that setup is fast becoming the standard for premium gas-electric vehicles. It’s the surface textures—floating quarter panels, carved-out fenders bending the air, ultra-thin tires on enormous wheels, delicate LED taillamps, sweeps of matte blue and gloss black decorating all sides of the slippery metallic body. Then the doors swing up. Wow. Wherever Tesla is with the falcon-winged Model X, the i8 is a couple of space odysseys apart. And there’s no visible tailpipe.

None of the Noises Are Real

From the Transformers whine at startup to the pssshuuu of airlocks disengaging on shutdown, the i8’s sound effects would be comical if they weren’t played so well. The i8 acts like a spaceship because that’s what BMW believes it is. I’m a believer, too. Seal the butterfly doors, engage drive and what, is Rickie Fowler teeing off behind me? Have I landed on the 16th fairway? The silence is devastating. Yes, it’s a plug-in hybrid that runs solely on electricity under moderate load, the 129-horsepower motor driving the front wheels with only a faint whisper. But I just gave up the Aventador, and I’m upset I can’t stay that high forever. An i8 is V12 withdrawal in the worst way.

Stomp the throttle to awake the mid-mounted gas engine, and suddenly, there are signs of life. Roll the windows down (they can’t drop fully, so no arm-hanging) and the 1.5-liter three-cylinder, aided by another electric motor and a turbo, puts out 228 more horsepower. Revving in Park is the only way to hear this engine’s true hum, though. It’s gritty and garbled, just as it sounds in the Mini Cooper for one-fifth the price. This is not impressive for a $140,000 car. So BMW added synthesized tones that make it sound like the 328i’s four-cylinder. Flick the gear selector left for Sport, floor it and out spits the company’s signature brawny six-cylinder soundtrack. More like it. Take anyone for a ride and they’ll believe whatever you say about the i8, except if you mention it has the same odd number of cylinders as a Subaru Justy from the Nineties. Fakery at its finest.

Compared to the Tesla Model S P90D and its 762 horsepower, the i8 should pack up and return to Munich. But 357 hp is plenty in a car weighing barely 3,400 lbs. A typical Model S weighs more than 5,000 lbs. The steering is faithfully light and accurate—rare these days in modern BMWs—and the brakes bite progressively without the lurch of many regenerative systems. Instantaneous launches and mid-range passing power meet the minimum objectives of a modern supercar. How deceptively fast is an i8? Enough that I almost caught a criminal charge on my way home. The less I say about that, the better, but know this: Drive an i8 as it should be driven, and those 20 or so electric miles will deplete into thin air.

The Flaws Are, Too

BMW’s carbon fiber body shell can’t be faulted. It enables the i8 to dance on the road like few cars can. Munich’s engineers are justifiably proud of figuring out how to mass-produce the same sort of body the Ferrari LaFerrari has, and to sell the finished product for a tenth of the price. That’s partly why the raw, plastic-molded composite structure is left entirely naked on the door opening. It’s also why there’s a wide door sill that curves up toward the seat backs. Structure, tensile strength, that whole thing.

Getting inside or exiting gracefully? Not possible. Once you’ve contorted your frame into the seat, you’re greeted with swabs of hard plastic. When I read the opening section of the i8 owner’s manual glowing over recycled materials and wind-powered assembly plants, I wanted to believe BMW used these plastics so the dash would shape-shift and become an Iron Man suit. But it’s just hollow and pretty bare inside an i8. The LED mood lighting takes a few more curves as it laps around the cockpit, but not much more so than in ordinary BMW models. The controls are parts-bin stock. When the digital instrument panel comes to life, the screen and all its non-configurable graphics are too small to read quickly.

The reward for this relative normalcy within an otherwise extraterrestrial machine? The i8 has excellent visibility to the front and side, and anything you can’t see is rendered from high-res 360-degree cameras. It feels and acts like a normal car. And it doesn’t cost half a million dollars.

Since nothing fits in the boot besides a laptop bag and the hood is sealed shut, an Audi R8 is actually more practical than an i8. It sounds better. Ditto an Aventador. But if you’re from the future, this is your car.