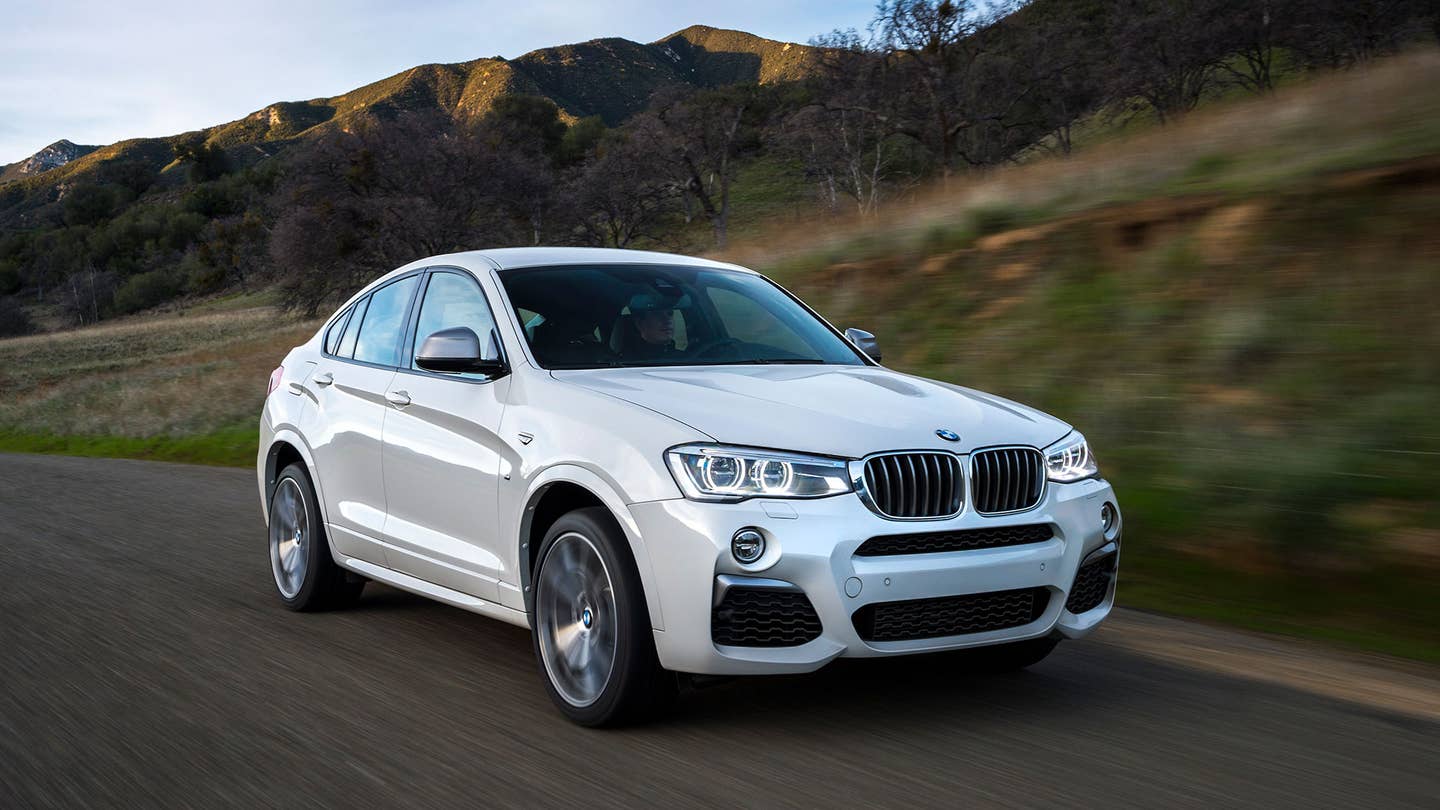 As BMW slices and dices segments like an automotive Fruit Ninja, a few bad apples are bound to splat on the showroom floor. The misshapen 3-Series GT comes to mind. The 5-Series GT, too. Awaiting our tech inspection at Mazda Raceway Laguna Seca, the new X4 M40i looks to be another odd genetic mix, an SUV centaur with an inflamed rump. Later, our photo editor suggests it looks like Walter White’s Pontiac Aztek. Ouch.

But what the X4 M40i does bring is an unexpected dose of the 555-horsepower X6M’s explosiveness, it’s unshakeable grip, enough to bring most any rival to its knees. That includes mopping up 60 mph in a spiffy 4.7 seconds, according to BMW. It feels even faster. Bavaria’s favorite tag team keeps getting stronger, a newly engineered 3-liter, 355-horsepower turbocharged inline-six with a ruthlessly M-tuned version of the company’s eight-speed automatic transmission.

Among compact performance SUV’s, Porsche’s Macan easily beats the BMW in a beauty contest. But while we’re eager for a back-to-back drive to test the theory, the 340-horsepower Porsche Macan S already feels like dead meat against this Bimmer. Even the class-benchmark Macan Turbo—with 400 horses and a 4.2-second dash to 60 mph—should make for a close tussle with the BMW on road or track. You know, for all those SUV owners who get together for a local track day.

I’m barely into Monterey traffic, eager to marinate in oceanside scenery after a flash-frozen New York winter. But the BMW has other plans, grabbing me by the scruff and leaping ahead. This might be a so-called “M Performance” model rather than a full-bore M car (Audi’s middle-child corollary is the S models), but these are upgrades you can really feel. That includes firmer springs and retuned dampers, stronger suspension wishbones, a firmed-up body, more camber on the front axle and M-tuned sport steering. Bigger front brakes and performance pads, check.

As in the standard X4 xDrive 35i, this is a pricey closed-deck engine, meaning the water jackets around the cylinders are shut at the top. That makes for a super-stiff design to withstand the added forces of turbocharging. Boost is cranked to help produce 55 more horses than in the X4 xDrive 35i, and a peak 343 pound-feet of torque, on tap anywhere from 1,350 rpm to 5,250 rpm. Other M additions include a forged steel crankshaft, modified pistons and crankshaft bearings and a separate oil cooler.

Climbing the Laureles Grade out of the Ponderosa-pretty Carmel Valley, the BMW starts working its magic. It’s not quite the Copperfield-in-Vegas spectacle of the larger X6M and X5M, but it’s still a disappearing act: The 4,235-pound SUV goes “poof,” replaced by a formidable BMW sport sedan, only on stilts for added novelty.

Civilization begins to melt away, giving an excuse to melt the tires instead. Nothing doing. The BMW’s optional 20-inch alloys, swaddled in Michelin Pilot Super Sports, grip hard. I whip the blown 3-liter to its 7,000-rpm redline… just in time to encounter an unexpectedly tight corner. The BMW hunkers down, skitters maybe six inches sideways, and bolts ahead like I’d planned the whole thing. The xDrive AWD is tweaked to send more power to the rear wheels, just where you want it. Sure, the X6M is scary-fast. But this hotted-up X4 is carrying 900 fewer pounds (and only about 200 more than a 3-Series GT), making it feel more agile, more car-like, through the twisties.

In reviewing the new BMW M2 from this same launch event, I neglected to mention the brilliant operation of its six-speed manual. So a moment of applause for this eight-speed, paddle-shifted automatic, already among the industry’s best, now even better in M tune. That includes standard launch control, and shifts so snappy that you’ll never miss the lack of a dual-clutch gearbox.

One complaint: While the driver-selectable Sport Plus mode keeps the body pancake-flat, it also makes the steering feel as weighty as a loaded barbell, as though only he-men are worthy of this performance realm. At least it sounds fantastic—a chesty, manly emanation that trumps the M2 coupe. In this M40i, the M boys add an aero-tuned intake manifold, and let the engine sing free through a low-backpressure, double-flow exhaust with dual black chrome tips.

Now, to the humpbacked elephant in the room: As with the X6 versus the more-traditional X5 SUV, the X4’s slope-backed design steals some cargo space and rear headroom, so it’s not as practical as its X3 cousin. Yet, with the contemporary state of form-function balance, dwelling on this seems silly. The X6’s stunning success proved a few things. One, that if Americans listened to auto journalists, we’d all be driving station wagons. Two, that while the ongoing genetic evolution of the crossover can be head-scratching at times, we might as well go along for the ride, and not reject every permutation out-of-hand. Some good cars will sprout from the petri dishes, from the Nissan Juke to a utilitarian BMW that doesn’t offer all that much utility. Car companies, for their part, see the upside to these coupe-esque SUVS, what with Mercedes copying BMW via the GLE and GLC Coupes, and Mazda readying the first non-luxury offshoot, likely named CX-4 or CX-6.

If you scope the X4 and like what you see (hopefully not an Aztek), and slide into the back and find acceptable amounts of headroom, this M40i version will set you back $58,795. That’s a roughly $8,500 bump over the X4 xDrive 35i version. And just for giggles, roll up to some purist in his precious E46 M3—ideally, a grumpy old auto journalist—and send him a message on what performance looks like, circa 2016. After you let him catch up, he might say that he misjudged you all along.