Oliver Rowland makes up a little more ground in the championship as Leclerc has gearbox issues. 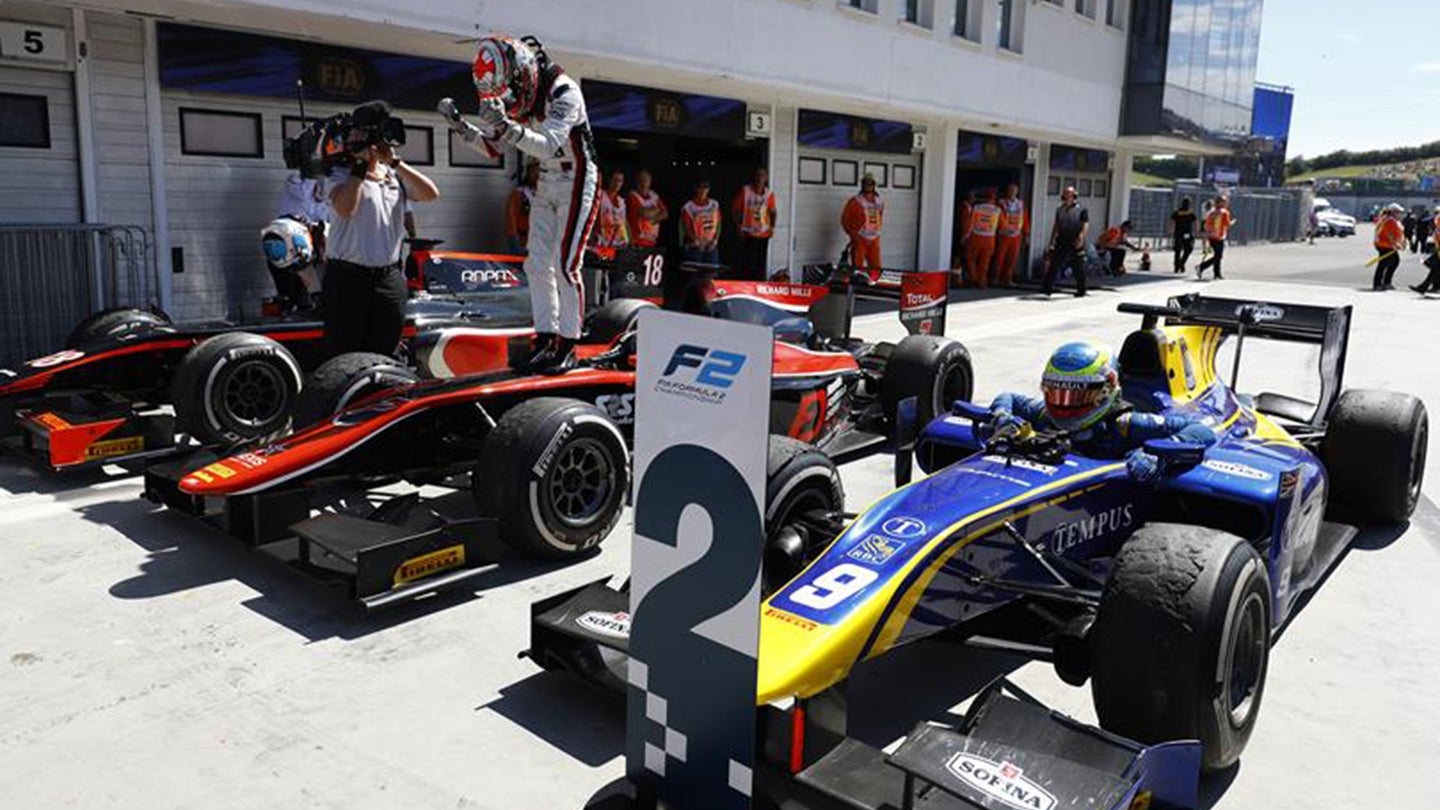 There is an old adage in racing that says you can't win a race in the first corner but you can certainly lose it there. In Sunday's Formula 2 sprint race, Nobuharu Matsushita didn't wait for the first corner of the Hungaroring to put that adage to the test. He had the start of a lifetime, going from fourth on the grid to first place in about 100 feet. From there, it was smooth sailing to victory.

While Matsushita deserves praise for a stunning start and running a near perfect race (he did run wide once), behind him was where the real action was happening. Championship leader Charles Leclerc was starting in fifth and his title rival Oliver Rowland was back in eighth. In the chaos of the start, the two cars on the front row dropped back. Rowland jumped up to fourth while Leclerc carefully avoided contact in turn one and remained fifth.

With today's race of 28 laps and everyone on the medium tires, whoever conserved their tires will be in a good position at the end. During Saturday's feature race of 36 laps, those who started on the medium tires saw them lose pace after about 18 laps, with a huge drop-off by lap 22. Today's race settled into a nice rhythm for a while. The time to push would be in the last third of the race.

By lap 17, some of the drivers starting showing signs of life. Leclerc was inching closer to Rowland, who in turn was fighting with Nyck de Vries for third. On lap 19, Leclerc was on the radio complaining of engine issues. This sparked Rowland to really push to get on the podium.

As Rowland tried to pass de Vries at turn two, de Vries responded with the pass of the race. He somehow shot around Luca Ghiotto, taking second position, leaving Rowland stuck back in fourth. It really looked as if there was about to be a three-car pile up in turn two. Instead, Ghoitto and Rowland were left wondering how de Vries pulled that off.

A brief virtual safety car on lap 22 allowed everyone to regroup and plan a final attack. Just before the track went to the VSC, Rowland and Leclerc were able to sweep around the struggling Ghoitto, putting the rivals in third and fourth place, respectively.

As the track went green again, Leclerc was told by his team to use third gear as much as possible. Today would not be his day. It was time to limit the damage that Rowland would do by finishing in front of him. There would be no final attack for Leclerc, only defense from those closing in on him from behind.

By lap 25, after another brief VSC, Leclerc's car was really falling behind. Rowland, who no longer had to defend, went on the attack to take as many points out of Leclerc's lead as possible. Rowland fought his was around de Vries for second place in the closing laps.

Leclerc was just able to hold on to fourth place, had the race gone just one more lap, he would have been passed by at least two cars.

Going into the summer break, Rowland has taken a small chunk out of Leclerc's lead. They are now only separated by just 50 points, 208 to 158. With only four race weekends left in the Formula 2 season, Rowland has a lot of work to do. He must outscore Leclerc by an average of 6.3 points in every remaining race to win the championship. Rowland cannot afford any mistakes leading to a DNF or non-points finish.

But the same applies to Leclerc. He did well to limit the damage this weekend but can't keep doing that for the final eight races. Like Rowland, he cannot afford any type of non-points finish. Both of them are excellent drivers and will push each other until the end. We'll see what happens after the summer break at Spa. Everyone will be well rested and ready to race on one of the fastest and most exciting tracks of the year.