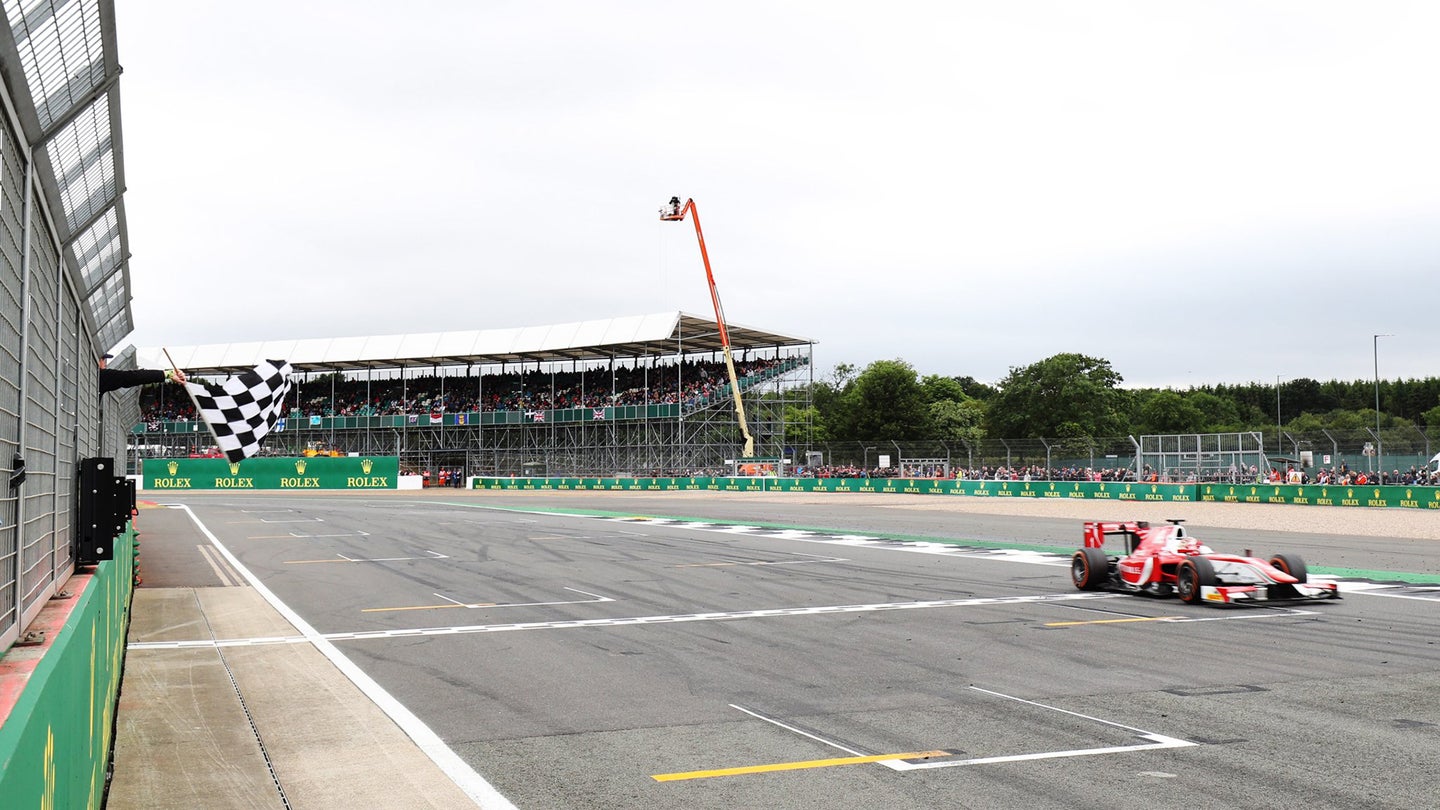 Charles Leclerc started from pole in the Formula 2 Feature Race at Silverstone. He got a great start and was pulling away at almost two seconds a lap. Behind him, Oliver Rowland, who is second in the championship behind Leclerc, got a poor start from second on the grid, with Norman Nato taking the spot from him.

For six laps, everything was perfectly fine and normal. Rowland was fighting with Nato for the second position. Leclerc was pulling away. On lap seven, Nato and Rowland pitted for tires while Leclerc stayed out.

Halfway through lap seven, smoke starting coming out of Leclerc's car. And not just a little puff, but what looked like a terminal amount. With race cars, where there's smoke, there's oil. It looked like Leclerc's day was done.

Instead of pulling the car over to retire, Leclerc just kept going. Drive it until it dies, right? Except it didn't die. He brought the car into the pits. The crew fitted new tires and sent him back out. You could see oil streaking across the right rear of the car's bodywork. How his car wasn't in flames with the engine cracked in half is a mystery.

Maybe McLaren-Honda should just have Alonso floor the gas next time his car is smoking?

At this point, Rowland stepped up his attack on Nato. If Leclerc's car retired, one of these two could win the race. Nato and Rowland went at it, lap after lap. Ultimately, Rowland was unable to make the pass. The positive here is that both of them drove in a professional manner while still aggressively racing each other. This is a skill that is often lost on some F2 drivers.

Leclerc kept moving through the field, back to the front. He made some very patient moves around those on old tires that had not pitted. He waited to make passes until just the right time as to not make a risky and questionable move. With his car's engine seemingly fine after dumping and burning off a lot of oil, the car decided to lose it's left side mirror. As if Leclerc needed anything else to go wrong to make the race more difficult.

Eventually, after everyone had made their pit stops, Leclerc was back out in front. He ran the last seven laps without issue or challenge. This was his fifth victory of the year. In a tweet after the race, he revealed that on the warm-up lap his brakes were on fire.

After the race, Leclerc explained that he only first saw the smoke from his car on the screens around the track. At first, he didn't realize it was his car that was smoking. "I didn’t fully understand what happened. I was looking at the screens on the straight and I saw my car with smoke behind it," said Leclerc. "I thought it was strange. I looked in the mirrors and I thought the engine would blow up. But nothing happen. Nothing appeared on the steering wheel that would indicate that something bad was going on."

We're pretty sure the only way to stop Leclerc at this point is to get Jeremy Clarkson to drop a piano on him during a race. And even then, he'd probably still end up on the podium.