For the first time in years, Pat Long and Jorg Bergmeister will share a car again 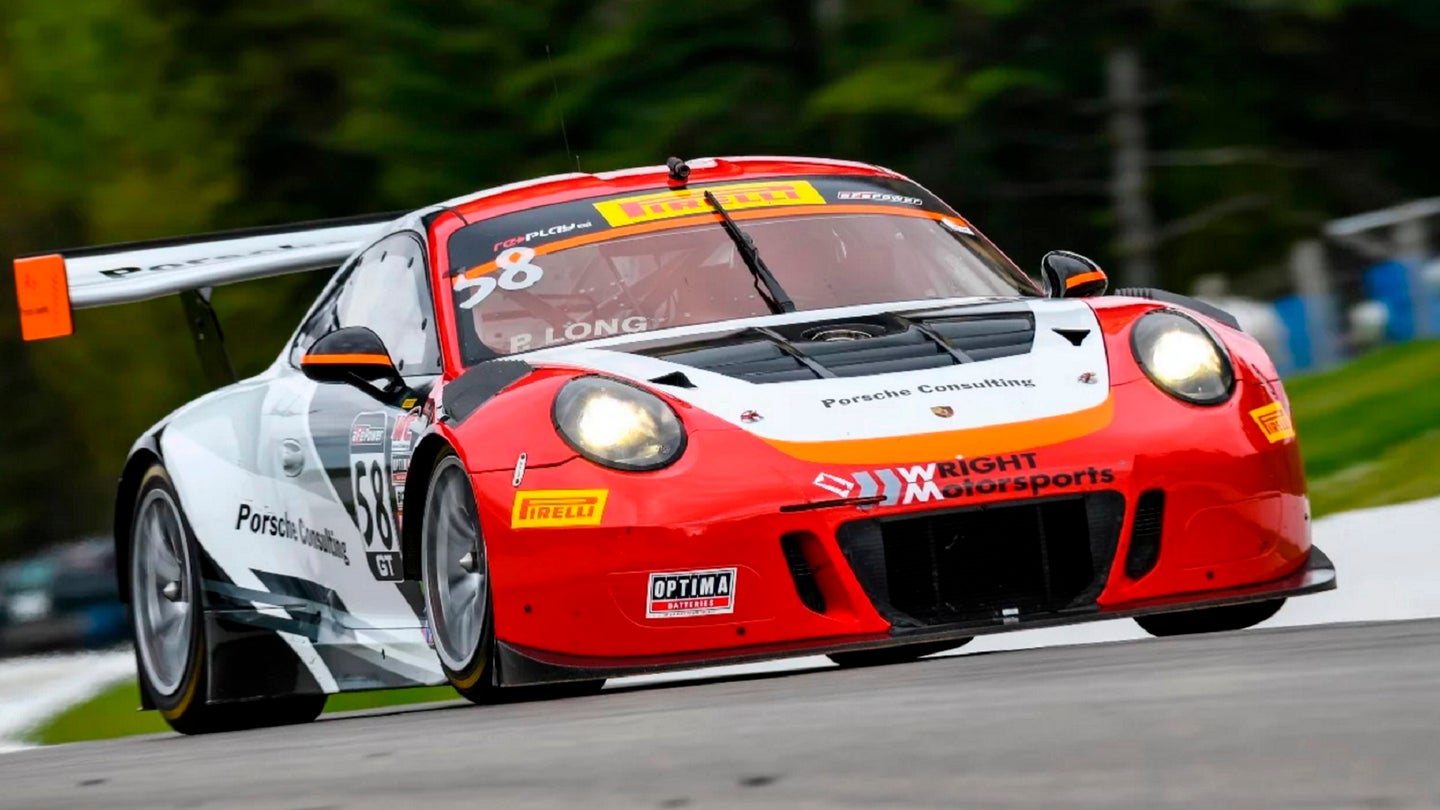 Porsche factory pilots Pat Long and Jorg Bergmeister are a well-known quantity, having driven together over the course of seven seasons, won Le Mans, Daytona, and Sebring together, won three American Le Mans Series championships together. Both of these drivers are stellar in well-prepared Porsche equipment, and they both have a knack for enjoying similar characteristics in their race cars. While Jorg is much taller than Pat, they share driving duties quite well. Sadly they have not had an opportunity to share a car on a regular basis since leaving the Flying Lizard team at the end of 2012. Thanks to Wright Motorsports assault on the 2017 Pirelli World Challenge season, they'll get that opportunity again, this time in a brand new 991-generation Porsche GT3R.

Ohio-based Wright Motorsports very nearly won the Pirelli World Challenge GT class championship with Pat Long at the wheel, ultimately decided by a final-race last-lap pass. For 2017 the championship has changed a bit, with some of the rounds, called "Sprint X", incorporating events where drivers must share their car with another. Some seriously great lineups have been announced by a few teams, but in our minds, the GT class car with the best driver lineup has to be this tried-and-true pairing of German and American. During the standard sprint events, Pat Long will be the full time driver.

In their second PWC car, Wright have retained 2016 GTA-class championship runner-up Michael Schein to run the full season. Schein will share driving time during Sprint X rounds with Jan Heylen. Considering how well prepared Wright usually is, we expect them to contend in both classes all season long.

I’m very grateful to be back for another shot at the championship with the Wright Motorsports team. It’s also great to back in a car with my long time co-driver Jörg Bergmeister. This will be our eighth time running a season championship as teammates since 2004! Jörg is a tremendous competitor and always pushes every aspect of the program to be its very best, including his teammate! We’ve shared a lot of very fond memories and victories in the past and have many more to make in the coming races.

I’m excited to get back to work with the whole Wright Motorsports team in the Porsche 911 GT3R. We learned a good deal about the car last year and I expect us to be strong out of the gate. I’m happy to see a few more competitors on the GTA grid for this year. It should make for some good racing. Sprint X will be a new experience for me as I have never had to do a driver change. However, the 60 second minimum stop time will give us plenty of time to get the change done. I’m looking forward to sharing the car with Jan. We’ve known each other for a few years now and he has been a big part of improving my abilities. We get along very well and I think we will be a strong pairing. Jan is one of the best drivers out there, it will be a great experience being able to compete together. Consistency is key, and it’s my goal to finish as high as possible in the championship this year.

I’m really happy to be sharing a car with Patrick again. The Pirelli World Challenge is going to be a new series for me and I’m excited for the challenge. Patrick has already been very successful in this championship so I’m looking forward to helping him with some unfinished business. Working with John Wright and Wright Motorsports is also something that I have done successfully over the years. We’ve already had a very good test with the team and hopefully, that will translate to many successful races for us during the SprintX season.

It’s so nice to finally be a part of the Pirelli World Challenge. Then the fact that I get to do it with Wright Motorsports and Mike Schein makes it even better. I’ve been working with John Wright for four years now and started coaching Mike in his first year of the IMSA GT3 Cup Challenge [2014], so everyone there is family to me. Mike is certainly one of the quicker GTA guys out there well so I’m confident that we have a great shot at this. It’s also nice to be in a car next to Patrick and Jörg. There will be some good competition within the team and I like that. Now I’m ready to get things started!

What Is Porsche’s Motorsport Pyramid?

From 911 GT3 Cup to 919 Hybrid LMP1, Porsche pushes drivers to progress up their ladder.