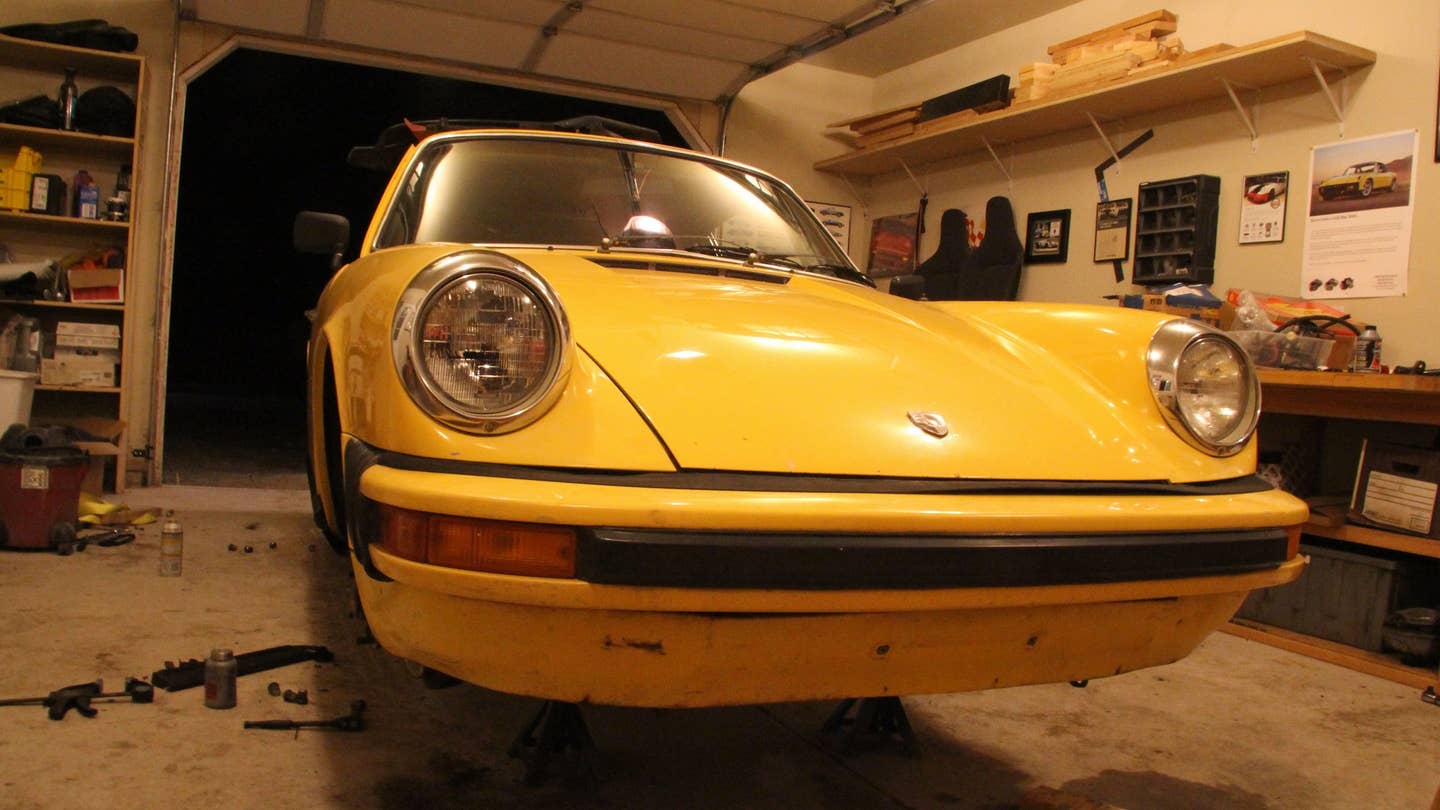 After a weekend wrenching in my garage, everything is a disaster, an omnishambles if you will. I am not a tidy person by nature, and when it comes to a thrashing, bumbling, yet somehow theraputic wrenching session in my shop, the aftermath is something to behold. I try to spend as much time in the shop working the kinks out of my various projects, usually of the Porsche variety, as I can. After a particularly difficult week, I knew that I needed some dirt under my fingernails, some brake fluid baked into my clothing, and a smashed finger or two to really shake the cobwebs off and get back to normal. I had a list of projects about as long as my arm to get completed, so most of the day Saturday and Sunday would be spent in the shop ticking those boxes.

The first step was to get my 1997 Boxster out of the shop. That, in itself, was an unfinished project, requiring me to finally install the new CV axle bolts. It's been over a month since that car received new springs, so I had been putting off buying new axle bolts. Then once I had them, I'd been putting off buying a new torque wrench. Projects can pile up if you don't keep on top of them, and this one had been put off for too long. First thing Saturday, I crawled under the mid-engine wonder and after some cursing, crawled out victorious. The tools from that project then get pushed aside, into a corner to be forgotten about for a while, the jack stands come out, and the car is returned to the earth for the first time in thirty days. Great job, time for a "test drive" to make sure everything still worked properly. It sure was gorgeous, so I turned off onto some of my favorite driving roads and returned an hour or so later. Remember how I said projects can pile up?

After the quick back-roads blast was finished, it was time to pull the 912E into the shop and take the wheels off for the first time since I bought the thing. The front tires are mismatched, the rear tires are far too wide for the narrow body, and the brakes aren't quite up to snuff for a sports car, even one from 1976. I figured it would be a good opportunity to take the wheels off, poke around in there, bleed the brakes, make sure the pads and rotors are still in decent shape, and put some anti-seize on all of the bits that need it. Of course, that's when the problems began. The 912, at some point in its life, had been fitted with a set of aftermarket locking lug nuts, and the key was nowhere to be found. I sent a text message to the previous owner, he had no idea about the key either, as the wheels hadn't been off in the two years he had owned it either. Being resourceful, I measured the outside diameter of the locking lugs at almost exactly one inch, grabbed a 15/16ths deepwell impact socket and sledge hammered it onto the curmudgeonly nut, then used an impact to hammer that thing off. Repeat four times. It all sounds pretty simple, but there was actually a lot of trial and error involved there, and took most of Saturday with a trip to the hardware store, and a few trips in the house to grab beers as the job got more frustrating.

With the wheels finally removed, the wheels set aside, and some fresh brake fluid purchased, it was time to bleed those pesky original calipers. Oh, but I wasn't able to find my line wrench set, so it was another trip to the store to get more tools. Once that was done, I hooked up my pressure bleeder and pumped it up to 10 PSI, and in short order ended up with half a liter of brand new ATE fluid all over the floor of my garage. Having never actually bled one of these old systems, I was not aware that there was a brake fluid reservoir overflow hose that emptied out in the front bumper. Okay, time to co-opt my wife into helping me with the push-and-hold pedal method that I haven't used in over a decade. It went rather quickly, and everything bled easily. Pulling the pins and springs on all four calipers, hitting them with a wire brush to get the old corrosion off, and coated everything in a sheen of anti-seize to ensure proper movement for years to come.

Sunday morning started fresh with a quick installation that again required the assistance of my wife. This Porsche was originally delivered with just one mirror on the driver's side. At some point in the late 1970s, the original owner installed a set of Vitaloni-style plastic mirrors, and they'd completley lost their ability to function as mirrors, blown over with the wind, and their reflective surfaces permanently rendered dull. I tracked down a set of vintage new-old-stock Hella aftermarket mirrors that fit the car and my personal style a little better. The new mirrors arrived a while ago, and it was time to get them on the car so I could see behind me properly again. The driver's side was easy, as I could position the mirror myself and check out the view from the driver's seat. The passenger's side one required me to direct Amanda to go forward, no backward, no down a bit and then left. Once the correct placement had been found for both sides, I was unfortunately required to drill a new hole. The old Vitalonis had already required holes, so I reused one of those "vintage" holes on each side to preserve as well as I could. I can really get into patina anyhow, and this car has plenty of it, so I'm not too worried about the old rusty holes or the old un-bleached paint showing through in spots. It adds character.

The next project for Sunday required a bit more work, some engineering, and a bit of electrical knowledge. The original Blaupunkt radio is long gone, but it's been replaced with this cool vintage Audiovox tape deck that was likely installed not long after the car was purchased new. This 912E wasn't fitted with many options from the factory, but the original owner (who had it for about 30 years) sure installed a lot of accessories. The deck itself still operates just fine, and while it doesn't pump out a lot of power or clarity, it's excellent for my needs. Talk radio sounds fine, and I can pop in one of those tape-deck to Aux-input deals to listen to *Generic Music Streaming Service* on my phone. The problem with this setup, however, was the half-ass installed aftermarket speakers that were both blown, and the original paper-cone speakers in the doors that were both blown. The 70's era speakers that were hooked up to the Audiovox unit were simply screwed into the carpet up under the dash, and they barely worked anyway. The wires to operate all of this aftermarket shame were all hanging down under the dash and looked far worse than it worked, which is to say not good.

The first step was to gut everything out of the old system and re-wire everything. The second step was to remove the original factory speakers and replace them with new proper modern 5.25" component speakers. Nothing fancy is needed for this car, just something that I can hear is all I require. A pair of Sony Xplod speakers were acquired from the local big box store and more holes were drilled into the doors. If there is any consolation, unlike the original owner, at least I hide my shameful modifications behind the original door panels and speaker grilles. Wire phantom power to keep the radio's clock turning when the car is off. Wire switched power so the radio comes on when the key comes on. Wire right hand speaker. Wire left hand speaker. Wire common grounds. Re-install the head-unit into the dash. Now it works like a champ, and I can actually hear my 'tunes'. Once everything was installed properly, I spent some time with the zip ties to make sure none of those wires were hanging down below the dash any longer. It looks ten times better than before.

So now I've got a car up on four jack stands waiting on new tires and new lug nuts. The door panels are still off, waiting for replacements for the clips I broke. There is still brake fluid, dirt, brake dust, anti-seize residue, and a variety of tools strewn about my garage floor. My work bench is littered with new-tool packaging, empty brake fluid containers, beer bottles, receipts, and no-longer-needed hardware. After the projects are all completed and the car is finally able to roll out again, I can get started on cleaning up the space it once occupied. This will not be a short or easy job.

I am going to work on injecting some more of my own experiences and projects into this space with weekly ventures into my own life as a Porsche enthusiast. This may consist of road trips, wrench sessions, events, experiences, and other bits of editorial. Let me know what you think of this column as it progresses, and if you have any suggestions for something you'd like me to investigate further in future installements, please put them in the comments below.