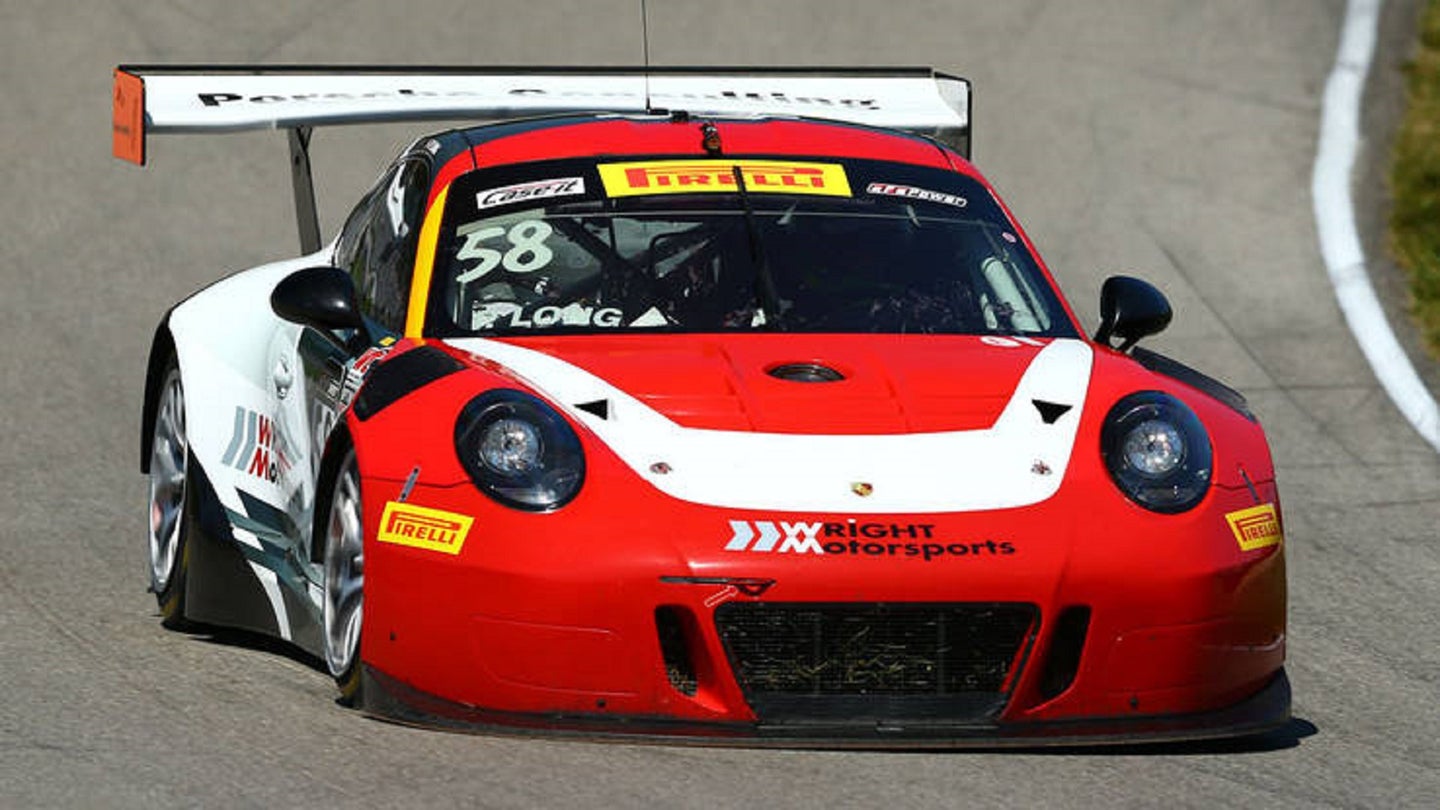 With a double-header weekend at the famed Mid Ohio sports car course, Pirelli World Challenge did a great job of keeping crowds entertained while Indycar was not on track. The sprint race format series invaded the track with a huge field of easily-recognizable sports cars, and provided a whole heaping spoonful of on-track action for fans to geek out over.

In Saturday's race, McLaren's Alvaro Parente stole the pole position away from the twin Cadillacs of Michael Cooper and Johnny O'Connell, with the second McLaren of Bryan Sellers in fourth and Pat Long's championship leading Porsche in fifth. While the racing was close and the battles came hard and fast, the top five GT-classed cars ultimately finished the race in the same order they started. With Cooper previously tied on points with Long, Cooper actually moved into the championship lead for Saturday night, slightly ahead of Long, who in turn was slightly ahead of Parente. By setting the fastest lap in race one, Pat Long had earned the pole position for race two.

Thanks to an excellent start, James Sofronas in the Global Motorsports Group GTA-class Porsche managed to move past Mike Schein into the lead of the class, and stayed there for the full 50 minute race. Here's what Sofronas had to say after the race:

“You need to have a little bit of luck, a little bit of preparation, and you can't make any mistakes. Mike Schein pushed me. I knew I wanted to get him on the start and I got him going into turn four. I put my head down but he never went away; he was probably three to five car lengths the whole race so it made me really focus on hitting my marks and being consistent. It's a good win to have and we have to do it again tomorrow (Sunday). This has been fun, the weather's great, and there’s a great turnout from the fans. My guys did a great job on the car -- it was way better than it was in qualifying so I'm excited to get back in it on Sunday.”

For Sunday's race, Pat Long started on the pole, scoring an extra point for accomplishing the feat. When the green flag flew, however, it was Alvaro Parente who made the early move, diving to the inside of Pat Long to take the lead at turn one on the second lap. After 36 laps of green flag racing, that's exactly how the pair would finish. The prior day's podium finisher, and interim points leader, Michael Cooper finished no higher than 7th overall, dumping him back behind Long and Parente each in the overall standings following the close of the double header weekend. Texan youngster Alec Udell, finished third behind Long in his first ever career overall podium celebration for GMG. Here's what Long had to say after the race:

“Alvaro and his team have been on it all weekend so credit goes to them. They're very good on the long run and the first couple of laps building pressure. With that, Alvaro had a great run coming out of the carousel and it didn't bode well for me to drive him to the wall since we have a mutual respect. Again, he was the car to beat this weekend. Last year it was tough for us to break into the Top 10. It's a special race for Wright Motorsports since it's a home event so for them to get us on the podium, it still feels pretty good. Usually second sucks but today we'll take it. The competition in PWC since I first sampled this series back in 2006 has just gone upward. I think the competition level is high when you have factory drivers from GM, McLaren, and Porsche so it's a pretty proud moment for me.”

Just like the prior day's start, Sofronas made a hell of a move on pole-sitter Schein to move into the GTA class lead. Sofronas never got a chance to stretch a gap, either, as Schein was right on his tail the whole time, making one final pass attempt on the last lap. Ultimately, Schein had to settle for second with a margin of just 0.174 of a second at the flag. Here's what Sofronas had to say after the race:

“It was an awesome run today. Mike (Schein) drove so clean. He pushed me again. I had to give it all I had. It was a great race and a great GMG team effort. I was managing my tires. I knew where I could hold off Mike and I was pacing myself. It was basically time to put it down but I couldn't leave Mike. So, I just thought to myself to be smart and not make any mistakes. At the start, I made the mistake of letting the pros get ahead of me. I could have stayed with the group for a while and get a gap but I was trying to be smart and fair to the other competitors.”