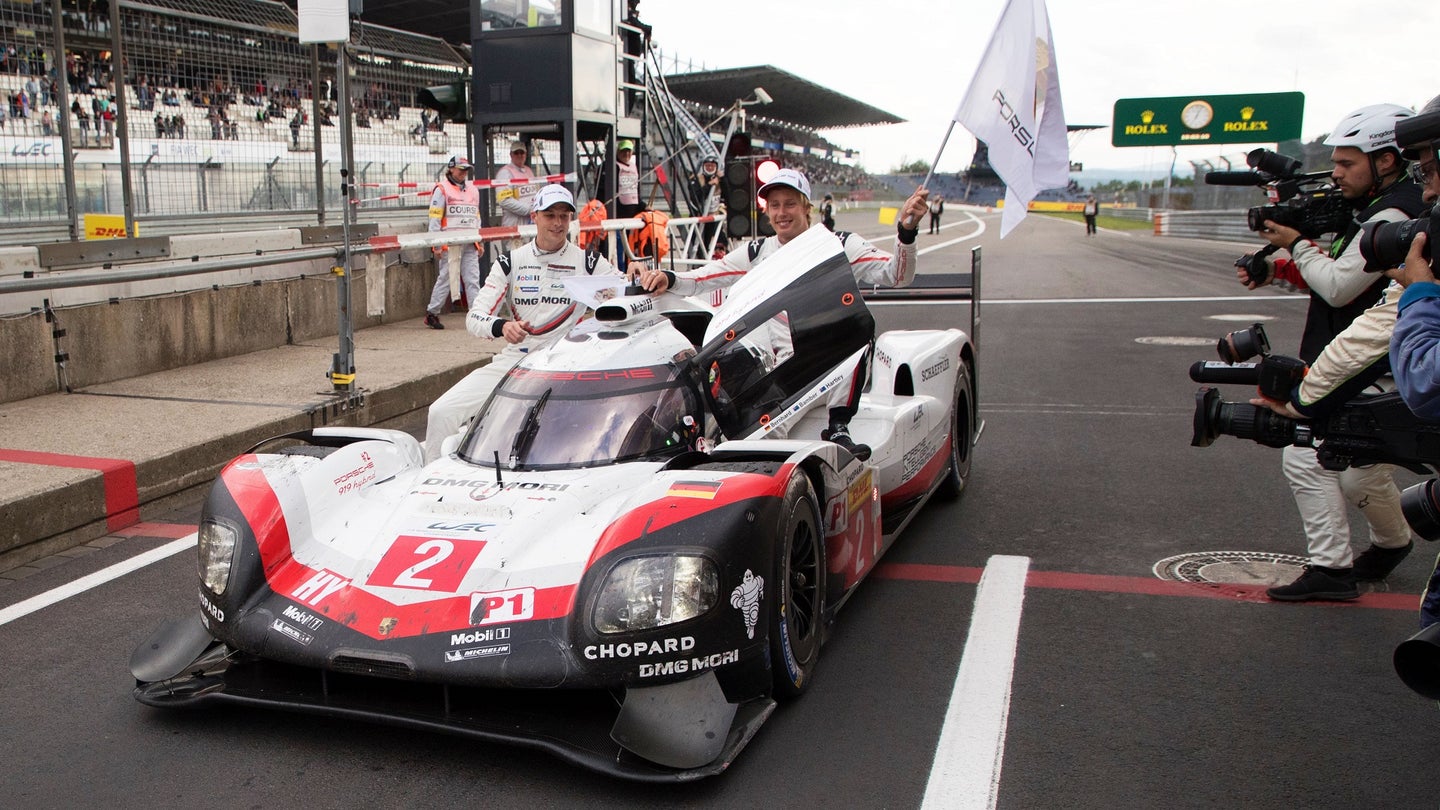 According to a report by SportsCar365, Porsche will come to a decision on the future of their 919 Hybrid LMP1 program by the end of July. Porsche's Andreas Seidl was quoted as saying, “I think there’s not more to say than what is around in the press and we have to simply wait now for the next decision. I have nothing to comment on this at the moment. We expect a decision at the end of July.” Toyota has further stated that they plan to be on the grid in 2018, but if Porsche were to quit their program, it would throw a serious wrench in the works. If Porsche were to discontinue the program after four years, it would still stand alone as one of the most successful programs in history, having won three Le Mans 24 hour races in a row, and a total of 15 FIA WEC victories total (so far).

This weekend, Porsche scored their third Nürburgring Six Hour race in a row, Timo Bernhard and Brendon Hartley were joined by Earl Bamber for the trophy-winning run, while Neel Jani, Andre Lotterer, and Nick Tandy joined them on the podium, securing a Porsche 1-2 win, the team's fifth such victory dating back to the 2015 Shanghai 6-hour race. A hat trick at Le Mans was followed up by a hat trick in Germany. This was Porsche's second victory in 2017, as more than half of the season lays ahead of them. With their new high downforce spec aero kit in play for the remainder of the season, Porsche looks to be in a good place for scoring more victories this year.

Lotterer started the race from third position on the grid, and proceeded to lock into a battle with the #7 Toyota and the sister #2 Porsche. At the close of the first stint, the three cars were covered by less than one second. Andre pitted to swap out for Neel Jani, who moved the car up into second position. On lap 68, Jani passed Brendon Hartley for the lead of the race, continuing a Porsche 1-2. After 97 laps, Nick Tandy took over the #1 car still in the lead. He lost that lead when he suffered contact with a lower-classed Ford GT. At lap 135 he re-gained the lead from the sister Porsche. At lap 63, the car was given back to the control of Andre Lotterer who was in until the end. Lotterer's car lost a bit of time in the final pit stop that allowed the #2 Porsche into the lead, and he finished in second place.

Timo Bernhard started the race from second, behind the Pole #7 Toyota. Timo stayed right on the Toyota's tail through the first stint. Passing off to Brendon Hartley for the second stint, the car re-joined in third behind Jani in the other Porsche. It isn't long before he's back ahead of the #1 car and battling again for the lead. At lap 43, Hartley moves into the lead of the race, as both Porsches passed the Toyota in one move. Hartley, confident in his car, decides to pit for fuel only, double stinting his Michelins. With newer tires on his car, Neel Jani forced Hartley down into second position. At lap 98, Hartley passes the reins off to Earl Bamber in second. Bamber again double-stints his tires, pitting for fuel only to move him back into the lead. A move to avoid a spinning LMP2 car cost Bamber some time, and the #1 car regained the lead of the race. For the final double-stint, Timo Bernhard is back in the car. Stretching his first stint until lap 197, he gapped a big lead and was able to pit for a splash of fuel to get him to the lap 204 finish.

“An Eifel hat-trick and the 15th overall race win for the 919 Hybrid only four weeks after our success at Le Mans – this is almost unbelievable. This outstanding result is another step towards our mission in defending both world championship titles. We managed to increase our points advantage and for me the most important thing is that the team can now enjoy a break and recover from the hard work over recent months. In Mexico, we will be refreshed and continue our mission.”

“A race like today is something you normally can only dream of. Either crew would have deserved to win today. We have had two impeccably prepared cars that worked perfectly over the entire distance. Our six drivers performed at the highest level and at the same time acted as excellent team players. More than once today we had problems with rubber pick-up that got stuck in the bodywork. This caused changing performances of our cars until we were able to clean the parts again at the pit stops. Therefore, our cars swapped positions several times and our drivers always did a great job. Congratulations and a big thank you to everybody who was involved in getting our new high downforce aero kit in place. It made today’s one-two victory possible. The order at the end of the race is ideal for both championship standings and this has to be the priority for Porsche.”

“I got into second but due to traffic lost that position to Brendon and chose not to defend too much. I was unlucky with traffic but that improved enabling me to attack, allowing me to have a nice clean but intense fight with the Toyota and Brendon. I got into the lead which I maintained despite a little [tyre] degradation."

“Initially I had a very good start and was on the better racing line but then Timo got ahead into Turn 1. During the first stint, Kamui Kobayashi, Timo and myself were all at the same speed and it was a lot of fun going through the traffic. It's been a good day for Porsche with both cars really strong, exchanging the lead many times. Maybe our car could have taken the race win but we worked as a team with the championship in mind.”

“I had a couple of decent stints and I brought the car in for André in the lead which was good. It was tough out there as the Nürburgring track configuration makes for a busy time behind the wheel. A double stint is hot work and pretty physical. We found that rubber debris caused some problems today which caused a fluctuation in the car's performance.”

“I had a good couple of stints – kept a steady pace and took no risks. The car's balance was really nice throughout – the guys gave us a great race car today. I had to take avoiding action when an LMP2 spun in front of me but that was my only slight drama. It's been a nice Sunday afternoon drive.”

“I had a good start and it was close fighting with Kamui and André. Advantages for one or another only came from traffic. Of course none of us wanted to risk too much in the first hour of the race. In the end it is a fantastic day for Porsche, recording a one-two race win on home soil. Either Porsche could have won today – it was very close from the start right through until the end.”

“I was really happy with my first stint. I took over from Timo and came out right behind the sister car but got ahead within a few laps. The car was feeling really strong initially and I took the lead from the Toyota and pulled a good gap. But halfway through the stint we lost some performance, maybe caused by pick-up with regards the front aero, but then right at the end the balance returned.”