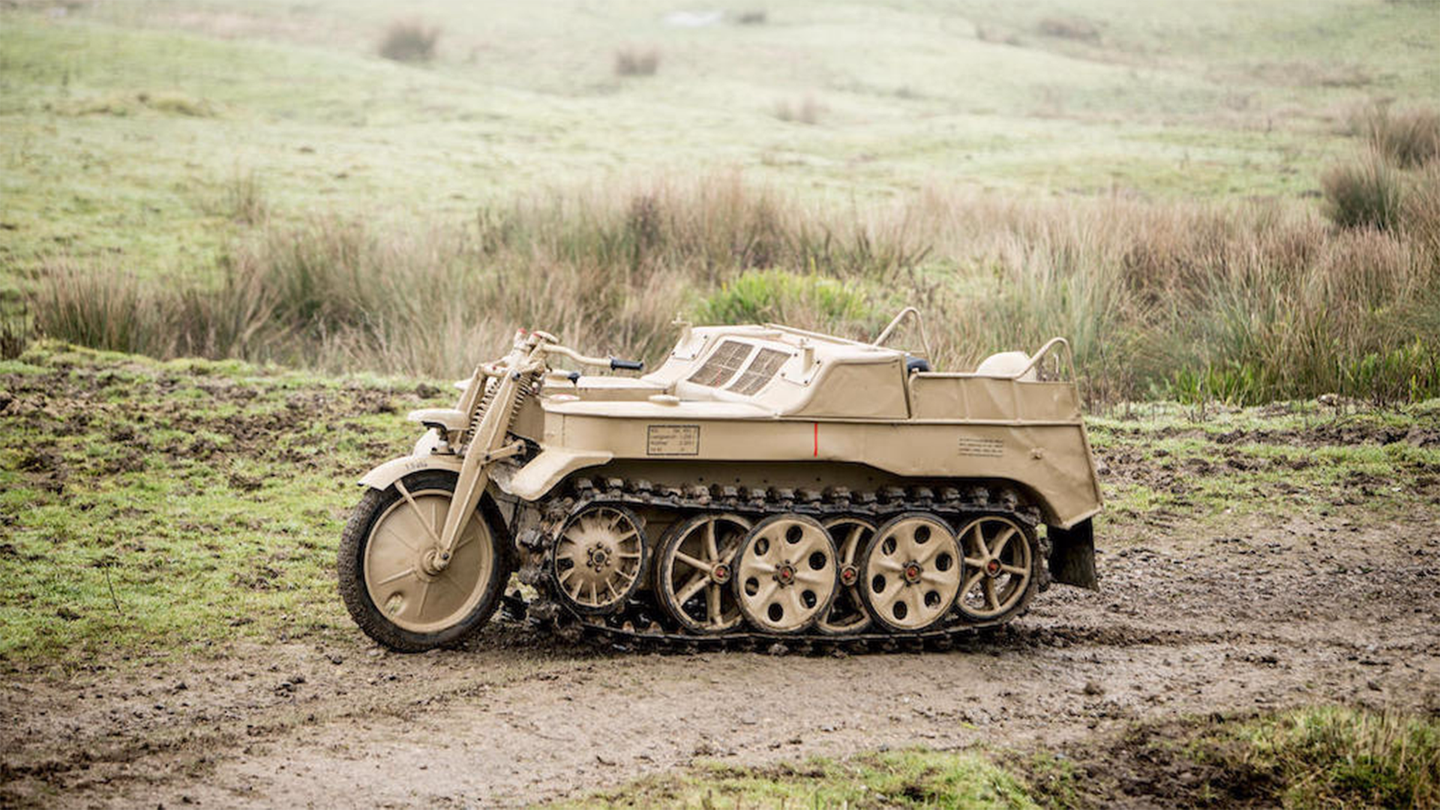 So, the Hermann Göring-edition early Beetle on eBay didn't do it for you? Too... pedestrian? Maybe one too many seats? Or perhaps it's just that you need something that has tank treads and low range but is also completely open to the elements, so you can really experience the outdoors. Well, might we suggest you get yourself to Goodwood this weekend for the 75th Members' Meeting, where Bonhams will be auctioning off this mid-1940s German SdKfz 2 Kettenkrad.

Powered by a 1.5 liter engine from the Opel Olympia, this light duty half-track follows the same patterns as other German military machines from World War II - ingenious and well made in some regards, but bizarre and, frankly, completely insane in others. Featuring a hand-twisted throttle and foot-operated clutch, the Kettenkrad (a combination of the German words for "tracks" and "motorcycle") could hit almost 50 mph, making it the fastest half-track vehicle of the war. It could also be operated without the front wheel attached, turning it into a full-on mini tank.

The drivers sits behind the handlebars on essentially a bicycle seat in a small hollow compartment between the treads. Two passengers can sit facing backwards on a bench at the rear. The steering is particularly clever - once the handlebars move past a certain point, brakes in either tread kick in to aid in turning. High and low ranges give it excellent off road abilities, and it's been said the Kettenkrad can climb a 25 degree slope on sand.

Despite the fact that only 8,000 were produced, the Nazis used them in nearly every theater of the war to ferry troops and tow anti-tank guns around, as they were the only light-duty vehicle small enough to fit in the holds of their Junkers Ju 52 transport planes. They were especially adept at crossing the literal seas of mud in Russia that bogged down the rest of the German army. In the closing stages of the war, they were also used to lay cables and tow the Messerchmitt Me 262 jets to the runway to save fuel.

This particular example has been fully restored with period parts and is expected to go for upwards of $100,000. And you can bid with a clear conscience, as this Kettenkrad sports a chassis from 1948, meaning it was never used in combat.

Look at Toyo, putting the “rad” in radial.