10 people were sent to local hospitals for non-life threatening injuries. 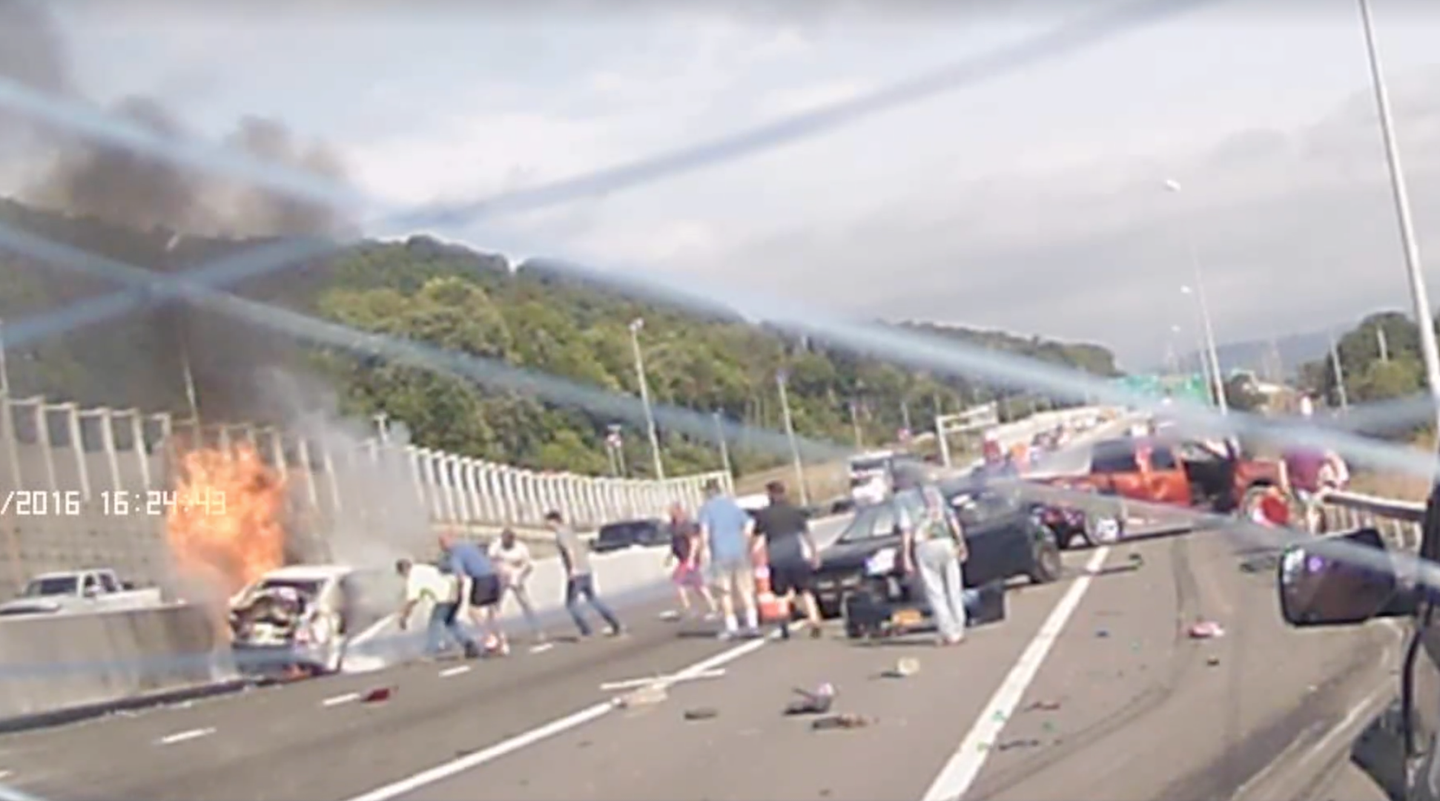 After motorists and construction workers sprang into action last week to free a woman from a burning car after a tractor trailer barreled through several cars on an upstate New York highway, the mayor of the town has released new footage of the crash as a means of trying to identify the heroes who saved the day.

A tractor trailer caused a 10-car accident on Route 17 in Binghamton, New York, last Thursday afternoon. 10 people involved in the pileup were taken to local hospitals for non-life threatening injuries, Press Connects reports. Dashcam video uploaded to Facebook by the mayor of the upstate New York town, David Rich, shows the devastating wreck from the perspective of one of the cars involved in the accident.

"Dramatic dash camera video of last week's 10-vehicle pileup on Route 17 in the City of Binghamton. It captures the chilling first moments of the crash and the actions of bystanders who pulled a woman from a burning vehicle. In a time of crisis, these brave individuals navigated through flames and broken glass to save a stranger's life. The woman suffered only minor cuts and bruises. Miraculously, the crash resulted in no fatalities. We're still attempting to identify those seen on video so they can be recognized for their efforts. On behalf of our entire community, I commend these unsung heroes as well as our local police, fire and EMS first responders. Binghamton is safer because of you."

In the video, you can see a tractor-trailer plowing through a lane full of cars, leaving a trail of destruction and smashed vehicles across the highway. Moments later, a white sedan damaged in the crash is shown nearly covered in flames. It takes about a minute for the motorists to notice the engulfed car, but once they do, a group of construction workers and other people whose cars were damaged by the tractor trailer leapt to the rescue, smashing windows and wielding fire extinguishers in an attempt to to save the white car's occupant.

Police stated that the tractor trailers brakes were part of the cause of the incident, Press Connects reports. The truck was being driven by Allen Kirkpatrick, 74, from Wyalusing, Pennsylvania. Following the incident, police issued Kirkpatrick multiple tickets for operating an out-of-service vehicle. The New York State Police's Commercial Vehicle Enforcement Unit is investigating the incident.