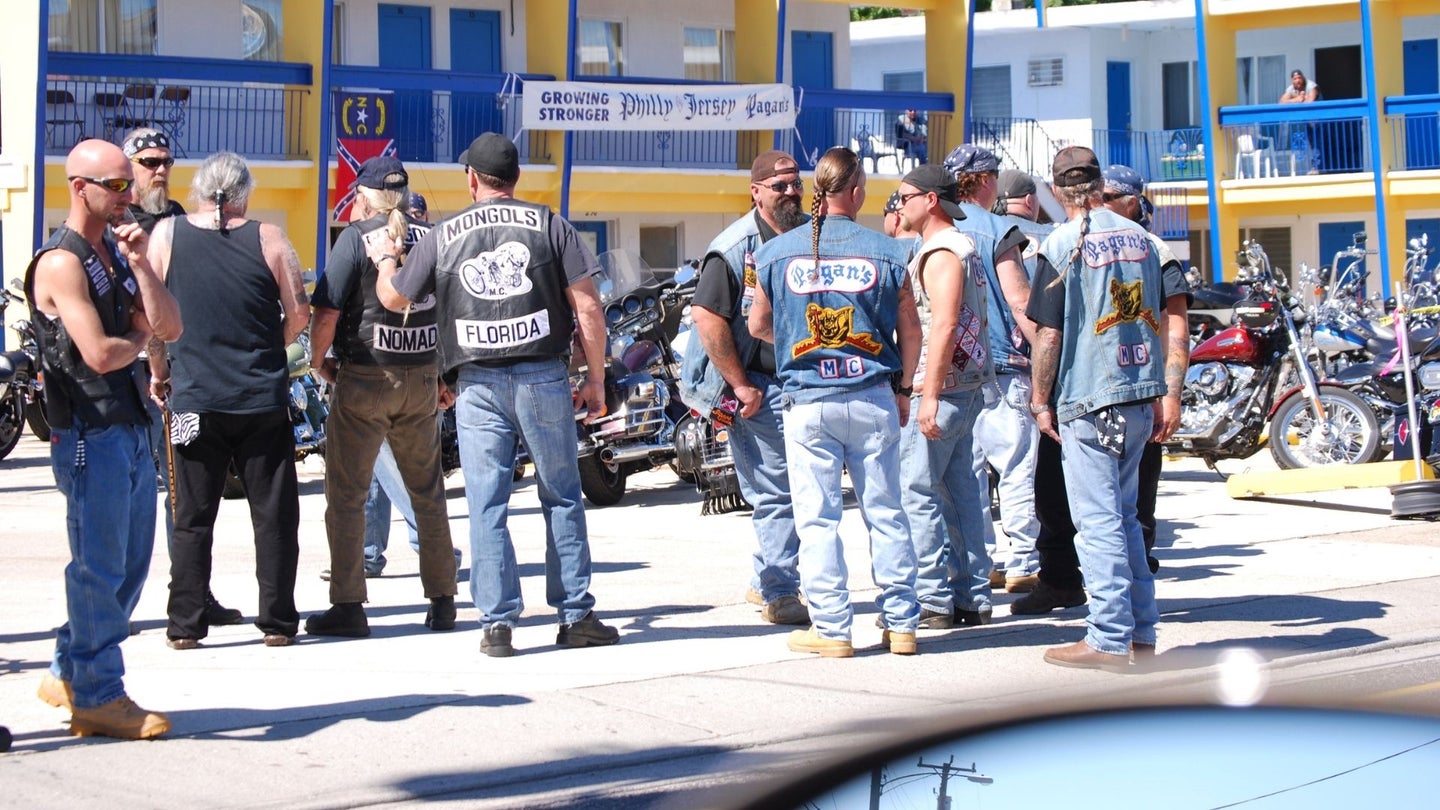 A few years ago, I was in the car with my sister and four children between us when a biker gang in full colors roared past us. A small SUV unwittingly pulled out in the next lane, separating one of the bikers from the rest of the group. We watched, transfixed, as the last gang member rode up to the side of the SUV and hacked off the driver's side mirror with his fist in rage.

These kinds of gangs are all over the country, and a broken mirror is a minor infraction on the scale of havoc they can wreak. As special agent Ken Croke witnessed during a two-year undercover sting, that’s just a taste of what the dangerous Pagan's Motorcycle Club was (and is) capable of inflicting. Including murder.

I'm not publishing his photos here for safety reasons, but I can tell you that Croke is a big man with a kind face. When he’s not undercover, it would be easy to mistake him for just another dad in the school dropoff line. If you were a neighbor or acquaintance, perhaps you’d assume he’s a former linebacker for a Division I football team. Under that suburban smile is a steel backbone, however; Croke spent many years in the thick of the criminal underground, playing the part of gun runner, gang member, and drug buyer in more than 1,000 undercover assignments.

He wasn’t looking for a new role when he encountered a member of the violent Pagan's Motorcycle Club by chance. The gang, which is known to have white supremacist ties and were already on his radar for a number of criminal activities. This group brings in dirty money through drug trafficking, the bulk of which is methamphetamine acquired from a Mexican drug cartel.

Club leadership isn’t opposed to selling weed and cocaine, either, and monthly dues of $100 from each member grease the wheels of the operation. Drug running ushers in violence, and the Pagans take pride in their fearsome reputation. And they definitely have a reputation: the Department of Justice classifies them as an Outlaw Motorcycle Gang (which is, fittingly, OMG for short) and calls them a "highly structured criminal organization."

Painstakingly creating an identity that would give him credibility with the Pagans, Croke established a fake criminal record and placed his fingerprints on file to help him infiltrate the gang. Distrustful and unpredictable, Pagans weren’t going to let him into the inner circle easily and it was a long road to acceptance.

Over time, the agent became known as an axe-handle-wielding brute called “Slam” who was engaged to protect the club. Every day, Croke had to deal with the stress of becoming a gang member while cleverly avoiding breaking the law or engaging in heinous activities himself. Croke even served a few days in jail for a gun arrest without breaking cover.

Croke says it took a lot of mental activity to make his undercover identity believable. Ultimately, he knew that being caught in a lie wouldn’t result in simply being kicked out of the gang. It would mean certain death.

“It’s very difficult to have two lives at the same time,” Croke told me in an interview. “Every lie builds on a lie; tell a story about where you went to dinner last night and you’ll be able to wing it, but if I come back and ask you about that dinner next week, I’ll bet you there will be inconsistencies in that story. When you do that over a course of two years, it is draining.”

The reality is that his undercover persona had to be instant recall, Croke said. He was always on guard and had to be mentally vigilant at all times, continually going over his story on a daily basis. Gang members would test him regularly, referring to information the undercover agent had shared a week or two before to ensure he was legitimate.

One of the Pagans’ claim to fame was that they had never been infiltrated by the law, and they found paranoia served them well. Once, Croke told me, he was at an event at which there were about 200 Pagans in attendance. One of the gang members told him they were on the hunt for an undercover Bureau of Alcohol, Tobacco, Firearms and Explosives (ATF) agent and Croke realized it was him they were looking for. At the time, they didn’t suspect it was him but the possible leak was jolting.

It would be easy to assume motorcycle gang members are psychopathic, senseless fools, but Croke says you can’t underestimate them; they’re methodical and on high alert. Gang members follow a hierarchy, and leadership is structured with at least a president, vice president, sergeant at arms, secretary, and treasurer. Chapter presidents form what’s called the “Mother Club,” which is responsible for managing Pagans' business and recruitment efforts on a local level.

Weekly meetings, cheekily called “Church” were mandatory, and the Pagans used encrypted cellphone apps and counter-surveillance efforts to avoid law enforcement. It's interesting that a group of people so opposed to laws and rules have a strict set for their own organization.

“These folks aren’t stupid,” Croke warned. In some ways, he says, the group acts like law enforcement in terms of its structure and process. These outlaws are part of the modern organized crime network. Croke witnessed the shakedown tactics of the gang in an oceanside resort town in New Jersey as they collected protection money down the boardwalk and it’s not a stretch of the imagination to figure out what could happen to those businesses if they refused to pay. To each small business, it was easier to hand over the money than to resist.

This little resort town was my family’s vacation spot in the summer for several years. Looking back, it makes me wonder what the seedy underside looked like back then. It was very likely the same and we just didn’t see it. That’s one of the dangers of groups like this, says Dave Wedge, a journalist and co-author of Croke’s book Riding with Evil, which is scheduled for launch next week.

“These guys are very much under the radar,” Wedge says. “They don’t use banks; they keep money in shoeboxes under their beds. They don’t even exist on paper with the government, so it’s hard to track them down. With the drug problems in our country, people like Pagans are tapping into that.”

Rules for Driving "Cages" and Bikes

Part of the Pagans' menace, as with any motorcycle gang, is the imposing sight and sound of dozens of men on Harley-Davidson bikes riding two abreast. Harleys aren’t just the machine of choice for the Pagans but a requirement, and there are strict rules about riding formation as well as travel structure. Early in his relationship with the Pagans when he was a prospect, Croke was obligated to carry certain tools and parts with him at all times in case a leader’s bike broke down.

They had cars, too, which the gang refers to as “cages.” Members were only allowed to drive a cage in certain situations, and they weren’t allowed to wear their colors (branded clothing with the gang name on it) at that time. Interestingly, Pagans are very structured about their branding and don’t want the public to identify with them in cages, only on motorcycles. From a safety perspective, riders weren’t permitted to fly their colors when riding solo as they would be a sitting duck as a target of rival gangs as in the news report in the video above.

Croke just started riding motorcycles again, because he said two years in the gang took away the fun of it for him. Travel could stretch across multiple states and was exhausting even for experienced riders like him. After a New York-to-Ohio drug run, the agent witnessed the president falling asleep on his bike, somehow staying upright. Croke even dozed off himself once, shaken out of a dream by one of the members in a cage laying on the horn.

Lower-rung members were charged with keeping their eyes open for potential danger, which is incredibly challenging when you’re flying down the road at 100 miles per hour with riders of various degrees of skill and experience.

“If the leader of the pack decides to pass a tractor trailer, you have to keep up. You can’t fall behind in the pack,” explained Croke. “You’re riding hard, and a lot of bikers are killed on their bikes. Riding side by side is challenging for a lot of riders, and you’re doing that with 100 others at 100 miles an hour. There were numerous times I was run off the road.”

Motorcycle gangs like the Pagans are gaining new members all the time, and they're constantly recruiting. And unfortunately, there’s also a population who glamorizes groups like them. The FBI's most wanted gangs like the Hells Angels and Pagans have support clubs made up of people who don’t want to be full-time members but they will support and glamorize the gang. Hangers on, if you will.

When Croke was undercover, the group of Pagans he was traveling with could walk into a bar and the crowd would go silent, just like in the movies, Croke told me. There is a level of infamy that some wish to tap into, but they don't understand the malice lurking underneath the community-facing surface. These men are capable of violent crime up to and including murder, Croke says. Once, he was even asked to help move the body and dig a shallow grave in the Catskills. Nothing is off the table.

"I was at a mandatory event with a bunch of bikers at the boardwalk in Wildwood [New Jersey], and a mom came up to me and asked if she could take a photo of me with her two- or three-year-old son," Croke recounted. "I thought, 'Who would want a photo of me with their kid?' The mom put the little boy on my lap for the picture and I whispered in his ear, 'Don’t grow up to be like me.'"

If only that little boy knew that he was actually sitting on the lap of a real hero, just not the one Croke was portraying, that would be an epic photo.

Got a tip? Send a not to tips@thedrive.com.

To most of the world, a Vespa is a stylish scooter. In Indonesia, it can be an adjunct rickshaw, a truck, or even a half-track.